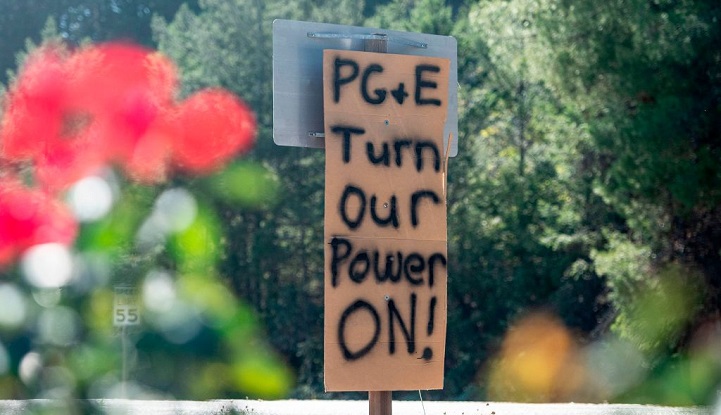 A sign calls for utility company PG&;E to turn the power back on outside Calistoga, California, on October, 10, 2019.
Photo by JOSH EDELSON/AFP via Getty Images.

Pacific Gas & Electric, the California utility that’s shutting off power to hundreds of thousands of people to avoid sparking more catastrophic wildfires, has given almost $150,000 to federal candidates since filing for bankruptcy protection earlier this year, according to a MapLight analysis.

More than half of the contributions from the utility’s corporate political action committee have been given to out-of-state politicians, an indication that the San Francisco-based company is concerned about federal legislation that could affect its ability to continue generating profits for its private investors.

PG&E is being held responsible for failing to properly maintain power lines that touched off a series of devastating fires last year. The fires -- the fifth-deadliest series of blazes in U.S. history -- killed 85 people, destroyed thousands of homes, and burned a city of 26,000 people to the ground. The utility, which is valued at roughly $4.2 billion, has estimated that its liabilities from the fire could top $30 billion. It declared bankruptcy in January and reached an agreement earlier this month to settle claims with insurance companies for $11 billion.

The power outages have exacerbated longstanding tensions between customers and the utility, which serves approximately 16 million northern and central California customers. A May poll found 3 in 4 California residents are concerned about rising power prices because of the fires. The power outages earlier this month, which were made as high winds and dry vegetation provided ideal conditions for wildfires, affected more than 2 million people and touched off  widespread panic because the utility was unable to provide precise information about the blackouts to the public. PG&E announced this week that it would likely have to shut off power to people in 16 California counties, affecting as many as 200,000 homes, apartments, and businesses.

The fires and the outages may be creating distance between the utility and state politicians. In the 2018 election cycle, the company gave $4.4 million to California political committees. Since the beginning of this year, however, PG&E hasn’t made any donations at the state level and has focused its attention on federal politicians. Federal Election Commission records show the utility gave $75,500 to out-of-state senators and representatives between January and Sept. 30; the remaining $72,500 went to California lawmakers.

Rep. Frank Pallone, a New Jersey Democrat who leads the House Energy and Commerce Committee, received $3,000; Rep. Greg Walden, an Oregon Republican and the panel’s ranking minority member, took $4,500 from the PAC. The House committee is responsible for overseeing the Federal Energy Regulatory Commission, a five-member panel that aims to “assist consumers in obtaining economically efficient, safe, reliable and secure energy services at a reasonable cost.”