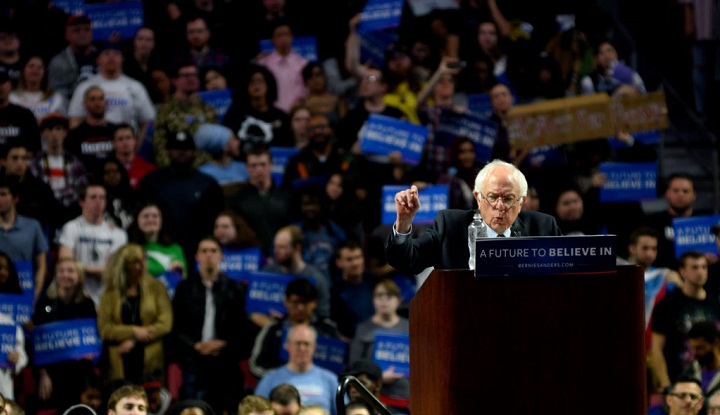 Vermont Senator Bernie Sanders, who announced this week he would once again run for President, speaks at a rally in Philadelphia in 2016.
Photo by Bastiaan Slabbers/NurPhoto via Getty Images.

The nation’s 10 biggest financial services companies and their employees have given less money to Bernie Sanders over the last six years than they’ve given to any other current or potential 2020 Democratic presidential candidate, according to a MapLight analysis.

(This is probably not a surprise to fans of the Vermont independent.)

Yet an analysis of the Senate and House campaigns of 10 major declared and undeclared Democratic hopefuls who have run federal campaigns since 2013 show that while the party’s liberal base is steering the candidates to adopt policies that would potentially hammer large financial institutions, the banks provided almost $1 million to support them.

Sanders, who has advocated a financial transaction tax on markets to fund a universal paid college tuition program, reported only $757 in contributions for his Senate campaign from the financial companies (about 35 cents per day). Meanwhile, Sen. Cory Booker, a New Jersey Democrat who condemned attacks on private equity companies during the 2012 presidential campaign, raised almost $273,000 (almost $125 per day) from the banks during the same period.

Booker’s haul from the banks was almost as much as the combined donations to the next two biggest recipients of financial corporation largesse. Former Rep. John Delaney, a Maryland congressman who was the youngest chief executive of a New York Stock Exchange-traded company, reported $151,800 in donations from banks during his last three election campaigns; former Rep. Beto O’Rourke of Texas, who ran an unsuccessful campaign last year against Sen. Ted Cruz, took $131,200 from the big banks and their employees.

Other candidates who received six-figure contributions from the financial companies include Sen. Kirsten Gillibrand, a New York lawmaker who reported $124,200 in donations, and Sen. Amy Klobuchar of Minnesota, who took $122,000. Sherrod Brown, the ranking member of the Senate Banking, Housing, and Urban Affairs Committee, received almost $91,500 from the banks for his successful 2018 reelection campaign.

Big banks gave about $35,600 to Sen. Kamala Harris, a former California attorney general who described her relationship with JPMorgan Chase as being “like dogs in a fight” in the aftermath of the 2008 financial crisis. Sen. Elizabeth Warren, who battled banks to create the Consumer Financial Protection Bureau, received a little more than $23,000 from the financial giants for her Massachusetts campaign. Rep. Tulsi Gabbard, a Hawaii lawmaker who has advocated breaking up big banks, got $11,000 from financial companies and their employees.

Morgan Stanley, which borrowed $107.3 billion from the Federal Reserve to stave off collapse during the 2008 financial crisis, gave almost $205,000 to the 10 candidates, more than any of the other top companies during the six-year period. JPMorgan, the nation’s largest bank with $2.5 trillion in assets, contributed more than $157,000, and Goldman Sachs, which emerged from the crisis as the face of Wall Street greed and corruption, gave almost $154,000.