Boosted by $30 Million During Campaign, Trump Will Thank NRA By Speaking at Convention 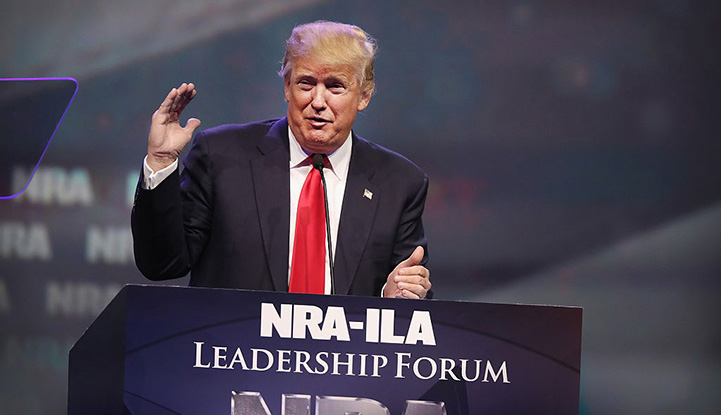 As a presidential candidate, Donald Trump addresses the NRA convention in May, 2016.
Photo by Scott Olson / Getty Images

April 27, 2017 - Donald Trump, who was buoyed as a candidate by $30 million from the gun lobby, will become the first president in more than three decades to address the annual convention of the National Rifle Association.

The NRA, which is hosting its annual convention this week in Atlanta, spent big to get Trump and other Republicans elected. The group dropped almost $53 million on outside spending during the 2016 cycle -- $37 million opposing Democrats and $16 million favoring Republicans, according to OpenSecrets data. The group also contributed more than $1 million directly to GOP candidates, parties, and leadership PACs.

The NRA was an early endorser of Trump’s candidacy, announcing its support at last year’s convention. Its support has led to access. Trump met with NRA Executive Vice President Wayne LaPierre at the White House during the first two weeks of his presidency as part of a Supreme Court strategy meeting with conservative groups. Getting a conservative justice onto the high court has been a priority for the group.

The association has been one of the most high-profile lobbying organizations on Capitol Hill, spending more than $24 million since 2008 to influence lawmakers and government officials, with $5.9 million spent during the most recent election cycle. The group reported spending $2.2 million on lobbying in the first quarter of 2017 -- about $1 million more than it has spent on lobbying in a single quarter since 2008. The NRA is currently pressing for reciprocal concealed-carry laws, which would allow people with licenses from states that have relaxed gun laws to carry hidden weapons in states with stricter gun laws. It’s also urging Congress to pass legislation that would relax restrictions on silencers, claiming they would be used to reduce hearing damage.

Trump signed NRA-supported legislation in late February, rolling back Obama-era restrictions on gun ownership among the mentally ill. The legislation, a Congressional Review Act (CRA) measure that passed largely along party lines, overturns a Social Security Administration rule that would have required the agency to share information about beneficiaries who are unable to manage their own finances with the National Instant Criminal Background Check System (NICS), the federal background check system for gun purchases.

Other scheduled speakers at the NRA’s three-day Atlanta convention include Cruz, Florida Governor Rick Scott and Secretary of the Interior Ryan Zinke.

Methodology:  MapLight analysis of campaign contributions to members of Congress from PACs and employees of the pro-gun industry from November 29, 2010 to November 28, 2016. Contributions data source: OpenSecrets.org.