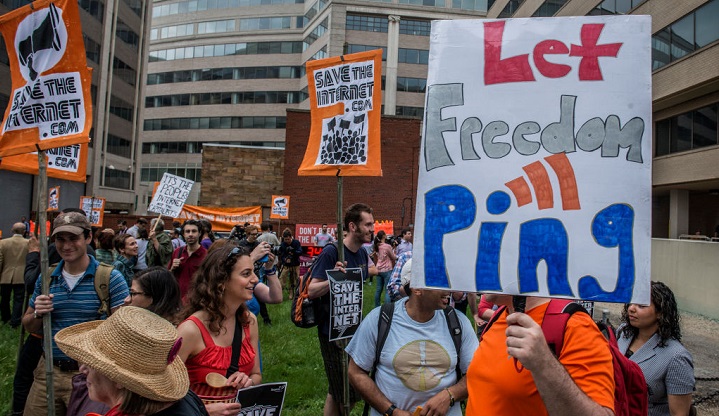 Net neutrality activists demonstrate in Washington, DC in May of 2014.
Photo by Bill O'Leary / The Washington Post.

The Federal Communications Commission (FCC), a five-member independent panel, is currently considering the abolition of “net neutrality” rules, regulations that require internet companies to treat all content equally. This proposal has led to backlash from net neutrality advocates who worry that internet service providers might favor some websites over others.

With the debate over net neutrality in full swing, MapLight investigated and found that three of the nation’s largest internet service providers—Comcast, AT&T, and Verizon—and the cable television industry’s primary trade association have spent more than a half-billion dollars ($572 million) lobbying the FCC and other government agencies in the past decade. This amount represents more than $100 for each of the 5.6 million public comments submitted to the FCC about the proposed changes to net neutrality rules.

MapLight’s data was cited in Yahoo! Finance, the International Business Times, The Nation, Vice News, Raw Story, and Techdirt. Our data was also featured in a Reddit post that received over 1,400 upvotes, and was tweeted out by Every Voice, Represent.us, Free Press, Fierce Telecom, Internet SF, Access Now, OpenSecrets, Gabriela Schneider at Issue One, and others. Our research was shared widely by advocacy groups on social media and in calls to action leading up to the Internet-Wide Day of Action to Save Net Neutrality held on July 12th, 2017. A round up of articles and tweets that featured MapLight’s research is available here.

The FCC’s decision, slated to be announced later this summer, will be a clear indicator of the power of corporate cash in a Trump administration.