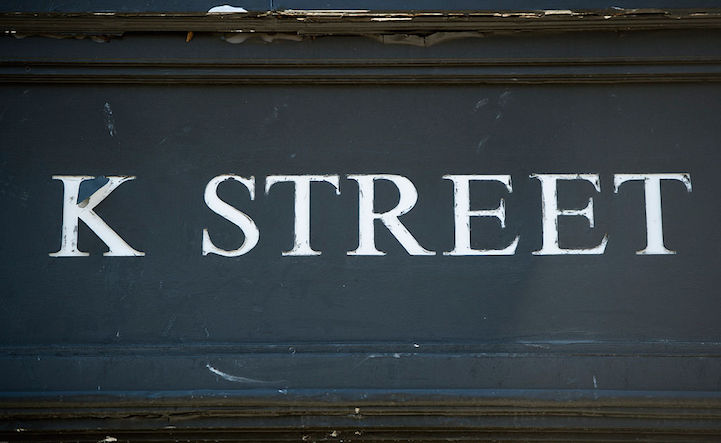 K Street is written above the entrance to an office building in Washington, DC.
Photo by Bill Clark / Getty Images

This story is a collaboration between International Business Times' David Sirota and MapLight's Andrew Perez.

April 17, 2017 - Corporate lobbyists are taking on a larger role in the Democratic Party’s fundraising efforts as it seeks to regain control of Congress, according to documents reviewed by MapLight and International Business Times. The cash infusion comes as House Democrats face pressure to break from their party and support Trump administration initiatives that could benefit the lobbyists’ clients.

A filing last week by the Democratic Congressional Campaign Committee (DCCC) shows four corporate lobbyists raised more than $380,000 for the organization -- the primary campaign arm for Democratic House candidates -- between January and March. The three-month figure is nearly four times as much as the amount lobbyists raised for the DCCC during the entire 2016 election cycle. In all, the DCCC reported raising $31 million in the first quarter of 2017.

Since the election, the question of whether Democrats should embrace or spurn business interests has been a point of contention in the lingering feud between the party’s centrist officials, most of whom backed Hillary Clinton’s 2016 presidential campaign, and supporters of Sen. Bernie Sanders, a Vermont independent who challenged the former secretary of state for the Democratic nomination.

Last year, the Democratic National Committee ended its ban on lobbyist donations, which was put in place by former President Barack Obama. The decision angered many Sanders voters, who saw it as a move to boost Clinton’s fundraising in the primary race. In the wake of Clinton’s loss to Trump, progressives have pushed the party once again to reject lobbyist cash.

Although the DCCC never prohibited lobbyist donations, the committee reported only about $100,000 in funds bundled by lobbyists in all of 2015 and 2016, according to a MapLight review of campaign finance records.

Three of the lobbyists who have been collecting checks for the DCCC were major Clinton donors and fundraisers -- accounting for about $1.7 million in donations to the Clinton campaign and its joint fundraising account with the DNC and state parties. Some of their clients could have interests in legislative measures before the House of Representatives.

Tony Podesta, who founded the Podesta Group lobbying firm, has raised $131,000 for the DCCC and donated $5,000 to the committee so far this year. His client list includes Walmart, Wells Fargo, as well as defense contractors Lockheed Martin and BAE Systems.

Trump and House Republicans have promised to repeal the Dodd-Frank Wall Street reform legislation passed after the 2008 financial crisis -- and House Democratic votes could be crucial to any repeal effort. Lobbying disclosures show Podesta’s firm has lobbied for Wells Fargo on “financial services regulation. The Podesta Group also lobbied on Dodd-Frank for the BMO Financial Corporation and the Investment Company Institute, a trade association representing the mutual fund industry.

Trump is expected to seek Democratic House votes for measures to lower the corporate tax rate. Federal records show that in 2016, Podesta lobbied for Credit Suisse Securities, Oracle and Wal-Mart on the issue of “corporate tax reform.”

Democrats have called for an investigation into the Trump administration’s links to Russia’s government. Podesta was hired to lobby for Sberbank, a Russian state-owned bank, during the 2016 election. He has also registered to lobby for at least six foreign governments, including Saudi Arabia and Iraq.

Podesta bundled $450,000 for the Democratic Senatorial Campaign Committee in 2016. His brother, John, was a former White House chief of staff for President Bill Clinton and chairman of Hillary Clinton’s presidential campaign.

Steve Elmendorf, who has raised $55,000 for the DCCC, leads the lobbying and public relations firm Subject Matter. His firm has lobbied on Dodd-Frank implementation for clients that include Goldman Sachs, MetLife and at least three financial industry trade associations. One of Elmendorf’s clients, CIT Group, recently gave Steven Mnuchin an $11 million payout upon his being appointed Treasury Secretary by Trump. Elmendorf also recently lobbied for General Electric and News Corporation on the issue of corporate tax policy.

Congress is now considering legislation to strengthen airline passenger rights, after a senior citizen was bloodied, knocked semi-conscious and forcibly removed from a United Airlines flight to make room for a company employee. The efforts could face opposition from the industry trade group Airlines for America, another Elmendorf client. "We helped America's airline industry connect with policymakers," his firm’s website boasts.

Another lobbyist, Vincent Roberti, Sr., has raised more than $88,000 for the DCCC year. He, too, has lobbied for Airlines for America. In recent months, Roberti has also lobbied on behalf of Citigroup, Pfizer, Boeing and AT&T.

Unlike his colleagues, David Thomas, a partner at Mehlman Castagnetti Rosen & Thomas, didn’t collect money for Clinton’s 2016 committees. He’s been an active fundraiser for the DCCC this year, though, raising almost $106,000. Thomas has lobbied for Chevron, Humana, and United Technologies Corporation.

The DCCC and the lobbyists raising money for the committee did not respond to requests for comment.