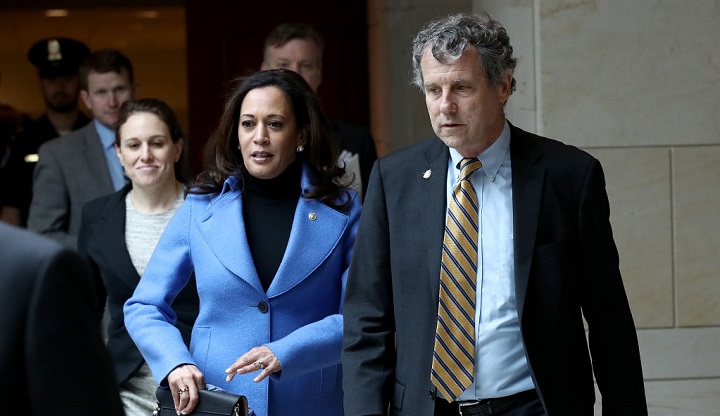 By one progressive yardstick, the 10 potential and current candidates for the 2020 Democratic presidential nomination who have run federal campaigns during the last decade are pretty much who people thought they were.

Half of the leading Democratic candidates accepted six-figure amounts from corporate political action committees during their most recent campaigns. Three Democrats took either no money from corporate PACs or returned more donations than they received, according to a MapLight analysis.

In recent years, political action committees typically have been one of the smaller avenues for corporate money in campaigns. Instead, contributions from large companies often are routed through super PACs that aren’t officially affiliated with specific candidates or funneled through nonprofit “dark money” organizations that mask the identities of their donors. Even so, the PAC donations are likely to serve as a litmus test for voters who are skeptical of the centrist wing of the party and its ties to large corporations. Former Secretary of State Hillary Clinton, who was identified by a large swath of voters as being too cozy with Wall Street, took almost $374,000 from corporate PACs in her unsuccessful 2016 presidential bid.

“While there are a number of reasons an individual may contribute to a candidate, there is only one reason a corporate PAC gives,” said Adam Bozzi, communications director for End Citizens United, a Washington, D.C.-based reform organization. “It isn’t for the benefit of a family in the state or district -- it’s to advance its corporate bottom line.”

Discomfort among progressive voters -- a key constituency in early Democratic presidential primary contests -- hasn’t stopped all potential 2020 candidates from taking corporate PAC money. Sherrod Brown, the ranking minority member of the Senate Banking, Housing, and Urban Affairs Committee who also has a seat on the Senate Finance Committee, reported receiving the most corporate PAC donations of any potential candidate. The Ohio Democrat, currently touring early primary states and expecting to announce whether he’s running by March, recorded almost $830,000 in donations from corporate committees during his 2018 re-election campaign.

Sen. Amy Klobuchar, who also won re-election in 2018, reported more than $635,000 in corporate PAC contributions. Klobuchar, a third-term Minnesota Democrat who has supported legislation to curb the influence of money in politics, said she’s “continuing to talk to people” about her 2020 prospects.

But at least three current or prospective Democratic candidates who took significant corporate PAC donations during their last election have now pledged to reject them:

Sen. Kirsten Gillibrand, a New York Democrat who announced her candidacy this week and who said she “is rejecting all money from any business-affiliated PACs,” received almost $222,000 from corporate committees during her 2018 campaign. Gillibrand made her announcement in a February 2018 tweet.

Cory Booker, a New Jersey Democrat, received more than $295,000 from corporate PACs during his successful 2016 re-election campaign. Booker signaled his intentions to stop taking corporate PAC money in a February 2018 tweet made only hours after Gillibrand’s tweet.

Kamala Harris, the former California attorney general who won election to the Senate in 2016, reported more than $192,000 in corporate PAC donations. After being asked about the issue at a town hall, Harris said in an April 2018 radio interview that she would reject future donations from corporate PACs.

Bernie Sanders, the independent Vermont senator who ran a spirited campaign for the 2016 nomination that was funded largely by small donors, reported no corporate PAC donations during his 2018 re-election campaign. Elizabeth Warren, the Massachusetts senator who has focused her candidacy on the declining fortunes of the American middle class, received a $1,000 donation from the Cummins Inc. PAC, an Indiana-based engine manufacturer. Former Rep. Beto O’Rourke, who unsuccessfully challenged Sen. Ted Cruz in a Texas Senate race, returned a $1,000 contribution from a PAC sponsored by Vistra Energy, an Irving, Texas-based energy holding company.

Former Rep. John Delaney, a Maryland Democrat who was the first candidate to announce a 2020 presidential campaign, received $76,500 from corporate PACs during the 2018 election cycle. Rep. Tulsi Gabbard, a Hawaii lawmaker, reported $5,500 in corporate PAC gifts during her latest re-election campaign.