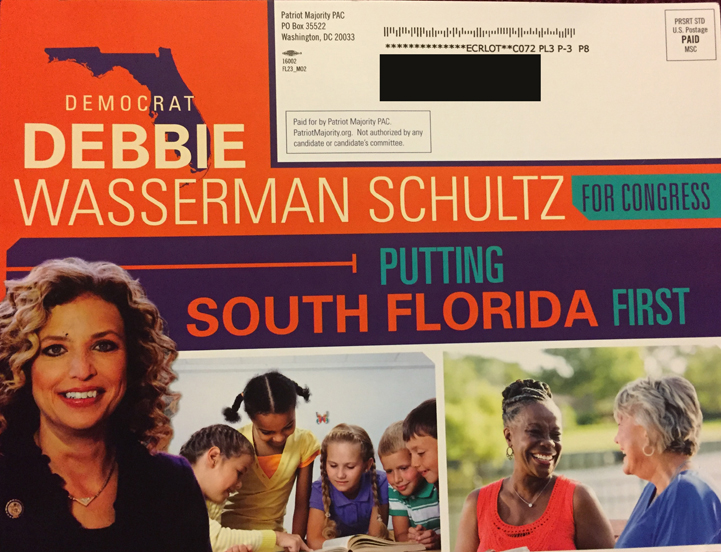 A week after Debbie Wasserman Schultz was forced to resign from her position as head of the Democratic National Committee, a national Democratic super PAC is spending big money to keep her in Congress.

Patriot Majority PAC is set to spend over $550,000 to help Wasserman Schultz ward off Tim Canova, the first real primary threat she’s faced in her congressional career. The super PAC has reserved at least $393,000 worth of advertising spots on South Florida television channels in advance of the Aug. 30 primary, according to a MapLight review of public records filed with the Federal Communications Commission (FCC).

The Washington D.C. based group has also spent over $160,000 on direct mail in support of Wasserman Schultz in recent weeks, reports filed with the Federal Election Commission show. One of the mailers obtained by MapLight notes that the six-term congresswoman has “deep roots in South Florida” and has President Barack Obama’s endorsement. 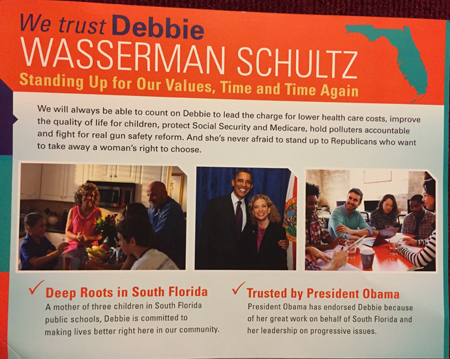 Canova, a local law professor, has the support of Vermont Sen. Bernie Sanders and is campaigning on many of the same issues Sanders did in his Democratic presidential bid -- like reforming Wall Street and limiting the influence of money in politics by overturning the Supreme Court’s Citizens United decision.

His longshot campaign gained new momentum following Wikileaks’ release of hacked emails from the DNC, which suggested that Wasserman Schultz and party officials favored Democratic nominee Hillary Clinton over Sanders throughout the primary process. The leaks caused an uproar on the left, prompting Wasserman Schultz to resign her post at the DNC.

This week, Canova’s campaign released an internal poll showing he’s trailing Wasserman Schultz by eight percentage points -- or “within striking distance,” according to a campaign email -- even though he’s not well-known within the district. Patriot Majority PAC put out results from a survey of its own on Wednesday that found Wasserman Schultz leading Canova by 33 points.

After a forum hosted by the South Florida AFL-CIO on Wednesday, Canova called the Patriot Majority PAC poll “garbage,” and said the group’s spending in support of Wasserman Schultz “reinforces my message.”

“This is a super PAC that’s been sending direct mail into the district,” Canova told MapLight. “It’s campaigning for her. She talks like she’s against Citizens United, but this is the system that she’s helped create, and she swims in this corporate money.”

It’s not clear yet who is funding Patriot Majority PAC’s efforts. At the end of June, Patriot Majority PAC had roughly $11,000 in its bank account; a month later, the group apparently had hundreds of thousands of dollars at its disposal. The PAC is required to disclose its new donors on Aug. 18.

The super PAC didn’t respond to questions from MapLight, nor did the Wasserman Schultz campaign.

FCC records show that Wasserman Schultz is not spending money on television ads currently. Canova’s senior strategist, Lourdes Diaz, told MapLight that his campaign has reserved about $400,000 worth of ad buys for this month.

Florida’s 23rd congressional district is heavily Democratic. The winner of the primary race between Wasserman Schultz and Canova is almost guaranteed to be the district’s representative in Congress in 2017.