Even Before $400 Million Midterm Effort, Koch-Linked Organization Has Been Spending Heavily 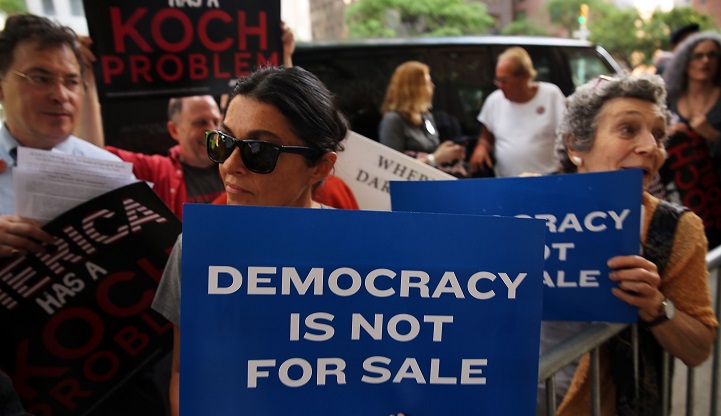 A constellation of political organizations funded by billionaires Charles and David Koch plans to spend almost $400 million to support conservative causes and candidates during the 2018 election cycle, the libertarian brothers said last month.

Their flagship organization, however, has already been shoveling money out the door.

Americans for Prosperity (AFP), a secretive Arlington, Va.-based nonprofit that’s refusing to release sections of its tax returns to the public, was the fourth-highest spending “dark money” organization during the 2016 election cycle, according to data compiled by the Center for Responsive Politics. It dropped more than $13 million during the last election in some of the nation’s most competitive races.

But the nonprofit hasn’t been dormant since then. AFP emerged as a player in the battle over a $1.5 trillion Republican tax cut passed last year, promising to spend “several hundred thousand dollars on digital advertising, and follow it with more investments like direct mail, door-to-door visits, and other grassroots action around the country.” AFP also pledged to spend another $20 million to “educate the public about the benefits of the new law.” Under the new law, the wealthiest 1 percent of U.S. taxpayers, including the Kochs, will reap about 80 percent of benefits by 2027.

The nonprofit also announced earlier this year that it would make “a significant investment” to ensure that more than 170 lower court vacancies -- and any potential vacancy on the U.S. Supreme Court, where the average justice is almost 70 years old -- are filled by conservative jurists.

AFP also has been active in fiscal issues debated in nine states:

AFP is the subject of an IRS complaint by MapLight for its refusal to release a redacted section of its annual tax return known as a Schedule B. The schedule shows the amounts of donations greater than $5,000 and can be used to determine the percentage of a nonprofit’s revenue from large contributions. The nonprofit argues that releasing information about the size of its donations would allow the public to identify its biggest donors.