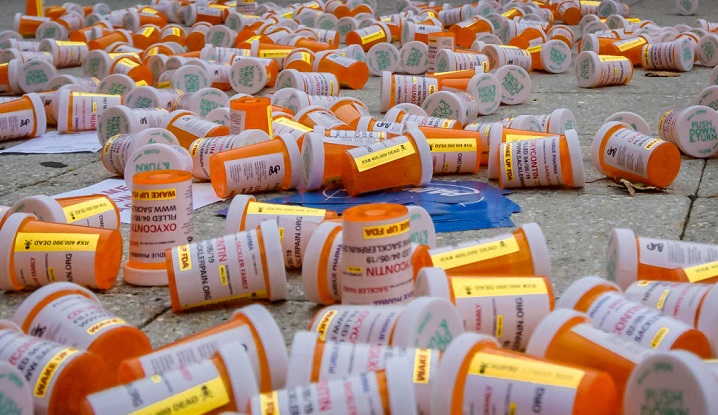 Prescription bottles of OxyContin line the ground outside Purdue Pharma in Stamford, CT following a rally staged by Prescription Addiction Intervention Now and Truth Pharm in September of 2019.
Photo by Erik McGregor/LightRocket via Getty Images.

Purdue Pharma, the pharmaceutical firm that manufactures OxyContin and allegedly helped fuel widespread addiction to painkillers, has turned to some of the same corporate spin doctors hired by BP after the Deepwater Horizon disaster.

The relationship was revealed in a legal document disclosed on September 15 when Purdue filed for bankruptcy protection. The filing, designed to settle thousands of lawsuits over its role in the opioid epidemic, revealed creditors seeking payments from the Connecticut-based pharmaceutical giant.

Bankruptcy documents have offered a window into corporate dark money in recent years. Coal company filings, reported on by The Intercept, have revealed ties to nonprofits and operatives who have harassed climate scientists and spread doubt about climate change. In the case of Purdue, bankruptcy filings show the company has worked with Purple Strategies and Dezenhall Resources, two controversial crisis communications firms. The drugmaker owes the firms almost $300,000, according to a list of creditors the company included in its Chapter 11 bankruptcy petition.

Josephine Martin, a spokesperson for Purdue Pharma, declined to comment.

Purple Strategies was hired by BP shortly after the 2010 Deepwater Horizon disaster. The oil spill -- the worst in U.S. history -- killed 11 crew members and released nearly 5 million barrels of oil into the Gulf of Mexico. In the following months, Purple Strategies carefully tracked public opinion and crafted strategies to limit the fallout for the company from the disaster. At one point, BP was spending an estimated $10,000 per day to dominate Google search results with positive content. One staffer at Purple Strategies reportedly falsely introduced himself to a reporter as working with ChemRisk, a scientific consulting firm that published questionable research downplaying health risks from the spill.

Dezenhall Resources helped oil giant ExxonMobil launch a variety of attacks on its critics at Greenpeace in the early 2000s. The public relations department at one point reportedly staged a counterprotest to an environmental rally on Capitol Hill, complete with demonstrators carrying signs that read “Capitalism Rocks” and “Stop Global Whining.” Dezenhall later allegedly helped create a nonprofit that lobbed accusations of financial impropriety at Greenpeace, efforts that led to an IRS audit of the environmental advocacy group.

The Washington, D.C.–based company was retained by Michael Jackson’s legal team before child molestation allegations against the singer went public, as well as by attorneys representing Jeffrey Skilling, the former Enron chief executive who served 12 years in prison for one of the most brazen cases of financial fraud in U.S. history.

During the past decade, Purdue Pharma has attempted to shape the political and regulatory environment through undisclosed payments to patient advocacy groups, legal nonprofits, and lobbying organizations.

In 2015, as the Obama administration worked to develop national prescribing standards that discouraged the use of addictive opioid painkillers, Purdue used third-party groups to undermine the effort. As The Intercept reported, several Purdue-funded groups, including the Pain Care Forum and Power of Pain Foundation, mobilized opposition to the proposed guidelines.

Purdue also took steps to shield its owners, the Sackler family, from facing personal liability. The company previously donated to the Washington Legal Foundation, a conservative litigation group, as part of an effort to weaken a legal standard used to prosecute corporate executives when their products cause widespread public health problems.

This story was reported in partnership between MapLight and The Intercept.