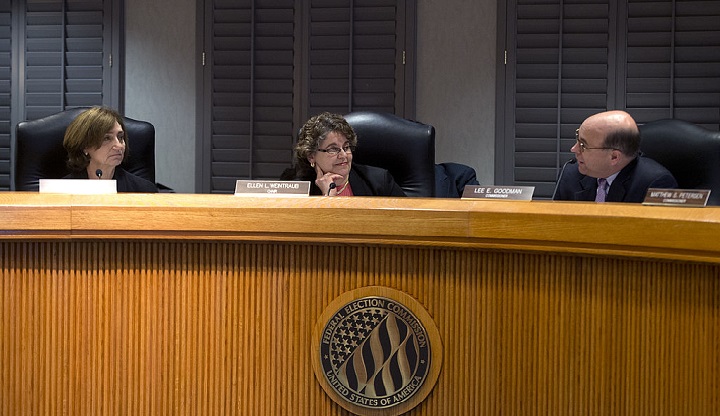 February 19, 2017 - Major campaign finance violations “are swept under the rug and the resulting dark money has left Americans uninformed about the sources of campaign spending,” a Federal Election Commission member wrote in a scathing report released with her resignation letter.

“This incredibly significant Commission is not performing the job that Congress intended, and violators of the law are given a free pass,” Ravel wrote in “Dysfunction and Deadlock,” a 25-page report released with her resignation letter to President Donald Trump. “Because of this, candidates and committees are aware that they can ignore the laws enacted to protect the integrity of our elections.”

The report by Ravel’s office, subtitled “The Enforcement Crisis at the Federal Election Commission Reveals the Unlikelihood of Draining the Swamp,” noted that the panel’s three Republican commissioners had voted together 98 percent of the time in cases closed since 2015. The three-member GOP bloc “routinely thwarts, obstructs, and delays action on the very campaign finance laws its members were appointed to administer,” she said.

In her resignation letter, Ravel asked Trump to live up to his campaign promises of “draining the swamp” by curbing the influence of money in politics.

Ravel cited a handful of obstacles that have kept the commission from enforcing campaign finance laws. Under the Watergate-era reforms that created the FEC in 1975, seats on the panel are evenly divided between Republicans and Democrats.

Republicans have opposed much of the agency’s enforcement agenda over the last decade, Ravel said, noting that White House Counsel Don McGahn admitted in 2011 that during his tenure as a member of the FEC, he was “not enforcing the law as Congress passed it.” And she observed that another Republican-appointed commissioner, Lee Goodman, said the agency was “functioning as Congress intended. The democracy isn’t collapsing around us.”

The ideological differences have caused persistent deadlocks. A little more than 10 years ago, votes were tied in less than 3 percent of substantive votes on enforcement cases closed that year. Last year, commissioners tied in 30 percent of such votes, Ravel said. The deadlocked votes have allowed the GOP members to “delay and dismiss flagrant violations, impose significantly lower penalties, and leave major cases without resolution,” she contended.

And in some cases, Ravel charged that the FEC hasn’t even been able to start investigations into allegations of campaign finance violations since the standard of proof needed to launch investigations has been changed by the three Republicans. “Consequently, major violators are routinely let off the hook at this early stage,” she said.

Even when investigations are completed, the amount of money that the agency collects in fines has plummeted. Ten years ago, the FEC levied more than $5.5 million in penalties. Last year, it imposed less than $600,000 in fines, or roughly two-thirds of the amount collected by a single state -- California’s Fair Political Practices Commission.

Finally, Ravel said, the panel hasn’t acted to create regulations that would require voters to be informed about the source of campaign funds. Although the U.S. Supreme Court’s 2010 Citizens United decision opened the floodgates for an unlimited amount of money to pour into elections, the FEC could draft rules to require greater disclosure for more than $800 million in “dark money” spending by nonprofit organizations and limited liability companies.

Ravel, a former U.S. Justice Department lawyer who led California’s Fair Political Practices Commission from 2011-13, reminded Trump in her resignation letter that he had described the campaign finance system as “broken” and had described super PACs as “a scam.”

The White House needs to urge lawmakers to strengthen disclosure laws, appoint FEC members to replace those whose terms have expired and consider public financing of elections to counter the influence of wealthy donors, Ravel wrote.

Trump, who spent more than $50 million of his own money on his successful bid for the GOP presidential nomination, campaigned as an advocate of disclosing money contributed to political candidates. “Everybody should be known,” he said at an August 2015 press conference in New Hampshire. “If somebody gives $1 million or $2 million or $5 million, it should be known.”

Even so, Trump benefited from the flood of money into the 2016 election. The president received more than $75 million in support from independent expenditure groups, which can raise unlimited amounts of money but are prohibited from coordinating with a candidate’s campaign.

Two of the super PACs that supported Trump were the subject of a complaint by the Campaign Legal Center, a Washington-based nonpartisan watchdog. The center claimed that one of the groups failed to follow rules designed to prevent campaign staff from immediately joining a super PAC and that another had improperly shared common vendors with the Trump campaign.

Republicans, however, don’t appear eager to address the issue of money in politics, even though 84 percent of Americans believe it has too much influence. Earlier this month, a GOP-controlled House committee voted to end public financing of presidential campaigns, as well as eliminate the agency that ensures the integrity of U.S. elections.