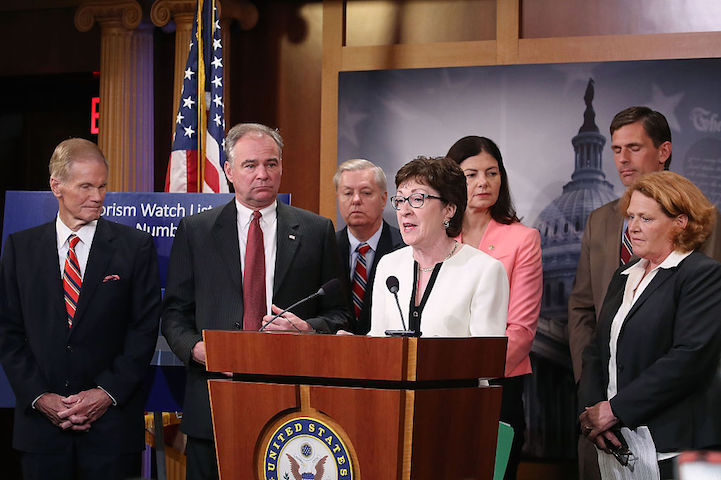 June 24, 2016 - Gun rights groups have made campaign contributions to seven of the eight Republican Senators who voted Thursday to support a measure that would block firearm sales to terror suspects, a MapLight analysis has found.

Of the six gun control measures before the Senate this week, the legislation sponsored by Sen. Susan Collins (R-ME) is the only one that was not voted down. But it’s unclear whether the amendment will get the 60 votes necessary to pass. Thursday’s vote was 52-46 in favor of not tabling the measure, with the eight Republicans joining 43 Senate Democrats and one Independent, Angus King of Maine.

Three of the Senators who supported Collins’ legislation -- Lamar Alexander (R-TN), Kelly Ayotte (R-NH), and Pat Toomey (R-PA) -- have received a total of $39,020 in contributions from groups opposing gun control during this election cycle. Most of that money -- more than $29,000 -- went to Ayotte, who is facing a tough reelection battle.

Senators Dan Coats (R-IN), Jeff Flake (R-AZ), Lindsey Graham (R-SC), and Mark Kirk (R-IL) also voted to support Collins’ measure. Graham has received over $90,000 from gun rights groups over the course of his career. Kirk is the only Republican Senator who has received no contributions from gun rights interests throughout his career.

Kirk received $500 from gun control groups during the 2008 election cycle. He is currently in a close race with Rep. Tammy Duckworth (D-IL). Duckworth took part in the sit-in on the floor of the U.S. House of Representatives Wednesday.

Toomey, who is also facing a reelection challenge, has received more than $96,000 from gun rights groups. In 2013 and 2015, Toomey sponsored measures to expand background requirements to include gun show purchases. Both measures failed.

Collins’ legislation is designed to address concerns raised about two amendments to block gun sales to terror suspects that failed earlier this week. Her measure would allow the U.S. Attorney General to prevent people on two federal terror watch lists from buying guns.

Collins’ legislation had the support of every Senate Democrat, except Feinstein and Sen. Bernie Sanders (D-VT), who did not cast votes.

Also on Thursday, Senators overwhelmingly rejected another compromise measure, sponsored by Sen. Ron Johnson (R-WI), that would have delayed gun sales to people on the two federal terror watch lists.

It’s unclear exactly how many people would be affected by so-called “no fly, no buy” measures. According to one estimate, about 5,000 Americans would be affected. A report by the Government Accountability Office found that 91 percent of known or suspected terrorists who applied to buy a firearm between 2004 and 2015 passed a background check and were approved for the purchase.

After the votes, Collins released a statement saying, “I’m very encouraged by today’s majority vote in support of our amendment and look forward to continuing to work with my colleagues on both sides of the aisle to advance this vital issue.”

But when asked about what happens next, she told told reporters, “I’m uncertain.”

Mia Zuckerkandel contributed to this report.

MapLight analysis of career and 2016 election cycle campaign contributions from gun control and gun rights interest groups to Senators in the 114th Congress available from the Center for Responsive Politics as of June 23, 2016.