In Fight Over the Right To Repair Equipment, Farmers are Outspent 28-to-1 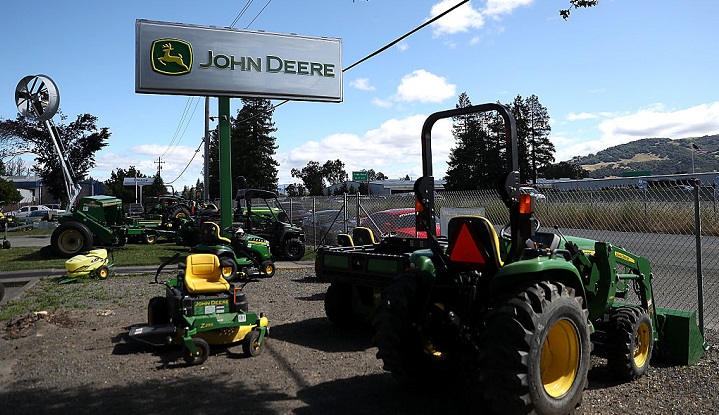 This story was published in partnership with Civil Eats.

When Tom Schwarz was growing up on his family’s 2,500-acre Nebraska produce farm and their International tractor broke down, fixing it was pretty simple.

“You bought a new part,” said Schwarz, 58. “Or, you bought a used part. You replaced what was broken, and you moved on.”

Today, repairs are much more complicated. Recently, a component in the guidance system on Schwarz’s John Deere 7230 tractor, which he uses to plant his crops, broke. Since the Moline, Ill.-based company no longer supports his tractor’s system, Schwarz is looking at a $3,000 bill for a used electrical part. He would like to just get his current component repaired, but manufacturers won’t provide independent shops with the guides or technology that would allow them to fix it, and Deere -- one of the few tractor manufacturers with an authorized repair shop in south-central Nebraska -- won’t repair older parts if it no longer supports them.

Schwarz is far from alone. Once capable of fixing their mechanical workhorses in a barn or under the shade of a tree, many of the nation’s 3.2 million farmers are now faced with tractors that can only be fixed by a manufacturer -- a situation that benefits manufacturers’ bottom lines but puts added burdens on often-struggling farmers. But Schwarz and other farmers are fighting back. They’re pushing “right-to-repair” legislation, which would require manufacturers to provide the same information and parts to farmers or independent repair shops as they do for the manufacturers’ repair shops.

This year, right-to-repair bills have been introduced in 11 state legislatures, including Kansas, Minnesota, New York, Tennessee, Massachusetts, Wyoming, Illinois, Iowa, Missouri, North Carolina and Nebraska. Supporters of the bill are at a distinct monetary disadvantage, though, and policy victories frequently are won by the side that spends the most. A MapLight analysis of state lobbying reports found proponents of right-to-repair legislation have been outspent by a 28-to-1 margin. Companies opposed to the legislation spent more than $2.6 million in New York, Massachusetts and Nebraska. Meanwhile, the coalition that wants farmers to be able to fix their own tractors has spent $93,620.

“We never doubted that it was going to be difficult, in a David-vs.-Goliath kind of way, to go up against some of the most iconic brands in the world,” said Gay Gordon-Byrne, executive director of The Repair Association, a New Jersey-based coalition that works to promote right-to-repair legislation.

The Case Against Right to Repair

Nebraska isn’t short of farmers like Schwarz who want to be able to repair their own equipment. This year, the Nebraska Farm Bureau approved a resolution expressing support for a right-to-repair bill.

Meanwhile, equipment companies including Deere, which controls as much as 60 percent of the tractor market in the U.S. and Canada, are opposed to the legislation. In a letter laying out its position, Deere argued that current regulations are necessary to maintain product safety and compliance with emissions standards.

“Allowing untrained individuals to modify equipment software can endanger operators, bystanders, dealers, mechanics, customer and others,” said Ken Golden, a Deere spokesman. He added that customers, dealers and manufacturers “should work together on the issue rather than invite government regulation that could add costs with no associated value.”

Golden confirmed Deere has lobbied on right-to-repair legislation, but declined to say in which states or how much the company spent. However, records show Deere has retained lobbyists in New York and reported spending $42,000 while lobbying on a 2015 right-to-repair bill in Massachusetts without reporting a position on the bill.

Deere and other equipment dealers have strong incentives to fight right-to-repair legislation. If farmers are forced to visit authorized dealers, it provides increased business for the manufacturers, and allows them to set the price for parts. Additionally, having only authorized shops able to repair machines means farmers are more likely to buy equipment from manufacturers with authorized shops nearby -- which in most areas are the bigger companies such as Deere or Case IH.

Right-to-repair legislation has attracted more than just tractor manufacturers’ attention, though. If a right-to-repair bill were to pass, it could also affect people ranging from heavy equipment operators to mobile phone users. Caterpillar, the world’s largest manufacturer of construction and mining equipment, has spent $38,700 while lobbying on right-to-repair legislation in New York. The Iowa-Nebraska Equipment Dealers Association spent $38,000 while lobbying against a 2015 right-to-repair bill. And corporate heavyweights including Apple, Verizon and the Computing Technology Industry Association (CompTIA) oppose the legislation.

The American Legislative Exchange Council (ALEC), a conservative dark-money organization that proposes model legislation for the states, has also declared its opposition to right-to-repair bills. The council, whose funders include billionaire libertarian brothers Charles and David Koch, describes right-to-repair legislation as “government mandates on innovators” that would force them to hand over proprietary information. Both e-commerce trade association NetChoice and telecommunications giant AT&T, which are opposed to right-to-repair legislation, are also on ALEC’s private enterprise board.

Nebraska, home to the nation’s fourth-largest agricultural economy, emerged in 2015 as a key battleground for legislative efforts to give farmers like Schwarz the ability to repair their own tractors. Telecom companies and trade associations that lobbied against the bill, including Verizon and CTIA, as well as manufacturing companies such as the Iowa-Nebraska Equipment Dealers Association, spent more than $78,000 combined. The lone supporter, the Nebraska Farmers Union, spent $4,400.

Sen. Bob Krist, an Omaha Republican who sits on the legislature’s agriculture committee, said he had mixed feelings about the bill. “When you’re charging $4,500 for a software update for a GPS, I think you’re out of line,” Krist said.

He didn’t have to balance his reservations about the bill in a vote on the 2015 measure, though; a series of procedural maneuvers in the state legislature doomed the bill, and it died in committee.

Outside of farm country, right-to-repair laws are also hotly contested. When Massachusetts considered right-to-repair legislation in 2015, opponents included medical companies such as Boston Scientific Corp., and Johnson & Johnson; automotive organizations like the Massachusetts State Automobile Dealers Association and the Alliance of Automobile Manufacturers;and technology companies including Apple. Opponents of the bill spent $1.27 million. Its lone supporter, The Repair Association, spent $31,500.

New York also considered right-to-repair legislation in 2015. Opponents spent $1.3 million lobbying in the state, while the coalition that supported the failed bill spent more than $57,000.

Sen. Phil Boyle, a Long Island Republican, said he sponsored the legislation after hearing complaints from repair shops in his district, who felt their growth was being stifled by manufacturers.

If history is any guide, right-to-repair advocates may look to bypass legislatures in favor of direct voter initiatives. A 2012 Massachusetts ballot measure to give diagnostic and repair information to car owners and repair shops passed with 86 percent of the vote.

“I think the way forward is a state is going to pass [right-to-repair legislation], or we’re going to do a ballot initiative,” The Repair Association’s Gordon-Byrne said. “But is it going to be next year or is it going to be in 10 years? That, I don’t know.”

Meanwhile, Tom Schwarz, the Nebraska farmer, is saving his money so he can afford a new guidance component for his $120,000 tractor. Since Schwarz is an organic farmer who can’t use herbicides, the machine’s guidance system ensures that stray weeds can be removed without damaging his crops. In the meantime, he’s resigned to buying a $3,000 second-hand part from Deere -- the only source for the component.

“I’m going to have to buy another receiver,” he said. “This is the second receiver I’ve bought—and every time I do this, it’s thousands of dollars.

“You have no other option,” he said. “You have to go to John Deere for everything.”

State lobbying records show how much a company paid a lobbyist during the filing period (two months in New York, four months in Nebraska, six months in Massachusetts). Lobbyists work on multiple bills in a given filing period, and filers do not report how much spending occurred on a single bill.

Data retrieved from the Secretary of the Commonwealth of Massachusetts, New York State Joint Commission on Public Ethics, and the Nebraska Legislature on April 20-21, 2017.