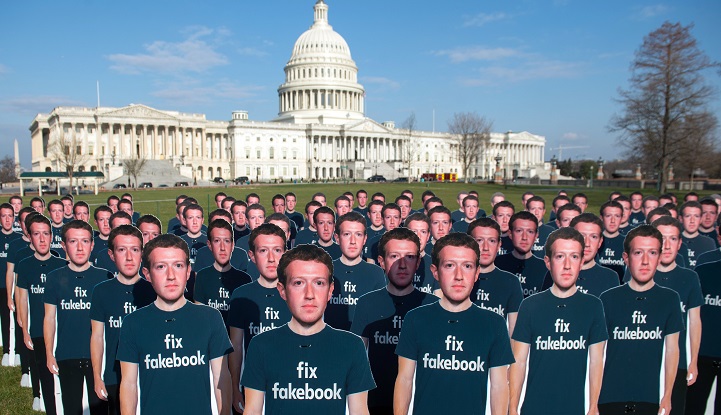 Cardboard cutouts of Facebook founder and CEO Mark Zuckerberg stand outside the US Capitol in Washington, DC in April of 2018 as part of a stunt by the global activist organization Avaaz.
Photo by SAUL LOEB/AFP/Getty Images.

Following a hearing today in the House of Representatives focused on the market power and dominance of Amazon, Facebook, Google, and Apple, Ann Ravel, Digital Deception Project Director at MapLight, issued the following statement:

“Amazon, Facebook, Google, and Apple’s market power stems from a number of factors, but right at the top of the list is the immunity internet companies have been granted for content on their sites based on Section 230 of the 1996 Communications Decency Act. That law, drafted with the intention of helping the early internet flourish, has now become a shield to protect the business interests of rich and powerful technology and social media companies. If the CEOs testifying at today’s hearing haven’t already written gold-plated ‘thank you’ notes to the Section 230 drafters, they’re long overdue.

“But fixing Section 230 to reduce anti-competitive behavior and limit the spread of misinformation online is more complicated than simply repealing the law given it also allows technology companies to moderate offensive content without fear of liability. As a next step to allow for greater accountability while protecting platforms’ ability to moderate egregious content, lawmakers should consider an amendment that would only provide immunity from liability if platforms show that their response to unlawful, harassing, and hateful uses of their platform was reasonable.

“With the 2020 election in sight, it’s critical that technology companies can be held accountable for their role in spreading disinformation and that lawmakers provide clear rules to limit the reach of deceptive online political content. By failing to reform Section 230, we risk both continued market consolidation at the hands a few large companies and the degradation of our democracy based on the rampant spread of false, misleading, and hateful speech online.”