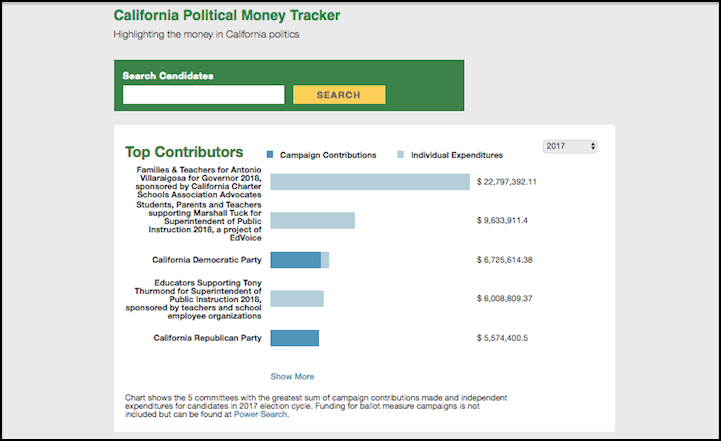 MapLight unveiled a new resource today for tracking money in California politics ahead of next month’s election. The California Political Money Tracker provides a user-friendly layout that displays overall campaign contributions as well as independent expenditures supporting and opposing candidates for state office.

Californians looking for an easy way to see key information about the funding behind candidates can now review charts and tables for candidates from the present back to 2000 -- including direct contributions as well as independent spending from outside groups supporting or opposing the candidate.  Users can also find direct links to campaign filings on the state’s Cal-Access portal.

“Independent spending from outside groups has a big influence on campaigns and candidates,” said Daniel G. Newman, MapLight President and Co-Founder.  “Now, Californians can easily see the money raised directly by a campaign right alongside outside money -- giving a more complete picture of a candidate’s funding that voters can use to inform their decisions.”

The data from the California Political Money Tracker is powered by the same information on display in the state’s existing Cal-Access portal, which was built 18 years ago and has taken criticism for being slow and difficult to navigate. The state is in the early stages of a years-long process to fully replace Cal-Access with a more modern and user-friendly system.

MapLight previously worked with the California Secretary of State to develop Power Search, a tool that lets the public quickly and easily search statewide campaign contributions and independent expenditures.  More recently, MapLight developed the “Quick Guide to Props,” which provides brief summaries, top campaign contributions during the election cycle, funding totals, and condensed “pro” and “con” arguments for each measure on the statewide ballot.

The California Political Money Tracker’s development was funded with a grant from The James Irvine Foundation with the goal of improving political transparency in California.

Additional detail on the 2018 election is available through California’s official voter information guide as well as Voter’s Edge California, a nonpartisan online voter guide produced by MapLight and the League of Women Voters of California Education Fund (LWVCEF).

“Looking up information about the funding behind candidates for public office shouldn’t be a cumbersome or painful process,” added Newman.  “A strong democracy thrives on transparency and that means providing clear and concise information to help Californians understand the money behind our politics.”