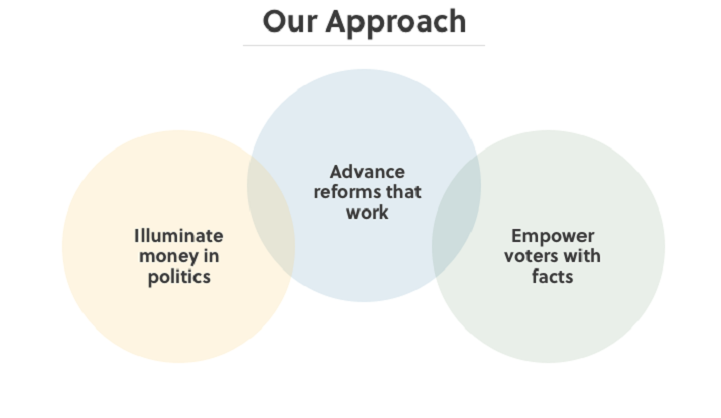 Since we founded MapLight 12 years ago to reveal the influence of money in politics, everyday life and the technology around us has changed immensely. At the time, MapLight’s data and research weren’t available on an iPhone or tablet because such devices simply didn’t exist. Twitter was still a year away, Uber was four years out and Google Maps and YouTube were only recently introduced.

In the past decade, a number of controversial Supreme Court rulings, most notably Citizens United v. FEC, ushered in a new era of money-dominated politics—further sidelining the voice of ordinary citizens as the influence of corporations and millionaires on our government has become even more commanding.

The cost of our elections continues to rise. More than $6 billion was spent on federal elections during the 2016 cycle, an uptick of more than 55 percent from 2004, according to data from the Center for Responsive Politics. Meanwhile, voters face an onslaught of political advertisements bankrolled by groups that do not disclose their donors, robbing the public of vital information about who is working to influence elections.

At the state and local level, the outsized influence of big money in politics is hardly less pronounced.  In California alone, campaigns on statewide ballot measures raised nearly half a billion dollars this past cycle.

As the problem has become more dire, public resolve to address the issue with concrete and lasting solutions has reached a fever pitch. Despite political divisions, public opinion surveys show a country united in the desire for a government that works for all of us, not just special interests.

Poll after poll in 2016 showed voters frustrated with the state of our democracy and eager for reforms. A Gallup poll found confidence in governmental institutions at a near record low, while another from the Economist/YouGov found nearly three quarters of Americans believe the government is run by a “few big interests looking out for themselves.” Nearly four in five respondents to an Ipsos poll favored sweeping new laws to reduce money’s influence on politics.

For years, MapLight has proudly helped illuminate the tangible ways money impacts policy by giving citizens, journalists and activists tools to expose the special interests that distort our laws. We are dedicated to continuing that work by vigilantly tracking the influence of money at the federal level and in California to provide balanced, nonpartisan analysis and resources—just as we have for more than a decade.

With our newly redesigned website, tracking influence is easier and more seamless than ever.

We invite you to explore our original reporting and tools to learn about lobbying money and campaign contributions in the U.S. Congress and in California.

At the same time, we recognize that raising awareness of the excessive influence of money in politics alone is not sufficient to achieve meaningful reforms. That’s why we’re excited to begin a new era at MapLight that includes a dedication to achieving tangible solutions and policies that make our government more responsive and accountable.

A wide array of community-led efforts in states and cities across the country are laying the foundation for policies that promote greater disclosure and transparency, place reasonable limits on campaign contributions, and institute publicly funded elections so candidates are not priced out of office before they even run. Combined with other efforts that strengthen our democracy, policies like these will change not only who is able to run for office—but who those officeholders respond to once in power.

As local campaigns to strengthen our democracy gain steam, we believe MapLight’s data-driven approach to money in politics research, dedication to accuracy, and resolve to help achieve a government that works for all of us will be assets that lead to lasting change.

More information about the expanded scale and scope of our work is available here.  We look forward to working with you to achieve an inclusive, responsive democracy.