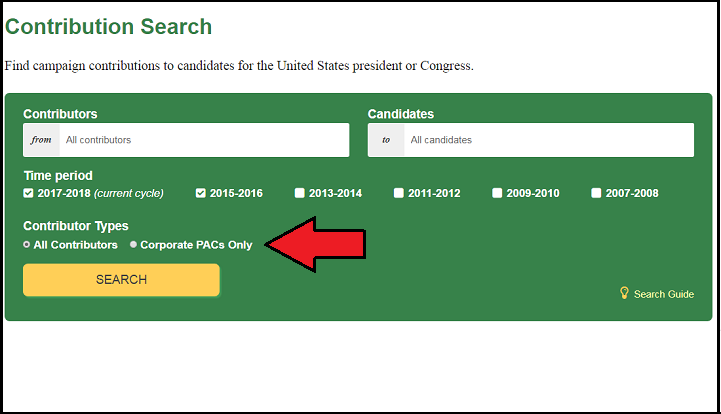 MapLight's new “Corporate PACs Only,” search allows users to see a breakdown of corporate PAC contributions including the  organization, date, and amount -- and download the data for further details.

MapLight launched a new online search tool this week offering a way for the public to quickly and easily find out which federal candidates have taken campaign money from corporate political action committees, or PACs.

“Across partisan lines, there’s a widespread recognition among American voters that corporations have an outsized influence on who gets elected and the policies our public officials pursue,” said Daniel G. Newman, MapLight President and Co-Founder.  “This new tool gives everyone interested in a candidate’s fundraising an easy way to see how much cash from corporate political action committees is fueling their campaign.”

To use the new search, click here and choose “Corporate PACs Only.”

The new search tool is part of MapLight’s existing campaign contribution search, which allows users to search for campaign contributions to all candidates for federal office from the 2008 election to the present.  Users can search for multiple donors and candidates simultaneously, and download the data for free for more detailed analyses. By using the search feature marked “Corporate PACs Only,” users can now quickly see a breakdown of corporate PAC contributions including the organization, date, and amount -- and download the data for further details.

Under federal law, contributions from individuals to PACs are capped at $5,000.  Contributions from PACs to candidates are capped at $10,000 ($5,000 each for the primary and the general election).  Corporations cannot contribute directly to candidates or to a PAC, but since the Supreme Court’s 2010 Citizens United ruling, they can contribute unlimited amounts to outside groups -- like super PACs or secretive, dark money nonprofits.

The underlying data displayed in the search results comes from statements of organization filed by PACs with the FEC indicating their organizational affiliation.