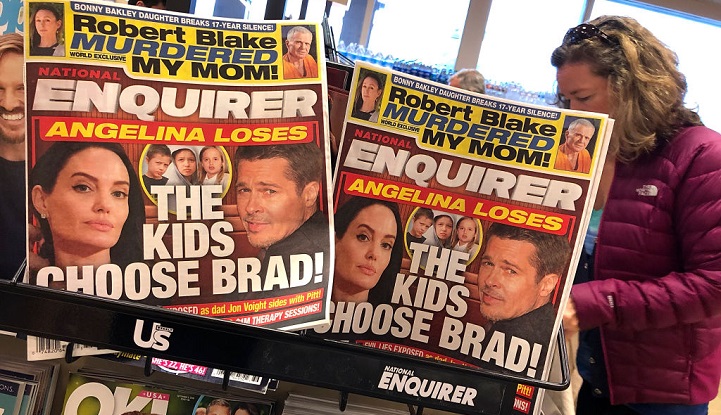 Copies of the National Enquirer are on display at a grocery store in California in August of 2018.
Photo by James Sullivan / Getty Images News.

During the last five years, taxpayers in New Jersey, Ohio and California have owned large financial stakes in the owner of the media company that allegedly helped the Trump campaign bury negative stories, according to documents reviewed by Capital & Main and MapLight.

Under Republican governors, New Jersey and Ohio committed at least $650 million of pension cash into Chatham Asset Management, a high-risk hedge fund that has taken control of the National Enquirer’s parent company, American Media Inc., which is at the center of the federal investigation into President Donald Trump’s 2016 campaign. California's pension fund also has a $235 million stake in a Chatham fund.

The hedge fund is run by Anthony Melchiorre, a GOP donor who reportedly met with the president and AMI CEO David Pecker at the White House soon after Trump took office. Melchiorre and his wife have donated more than $100,000 to Republican candidates and party committees since 2010.

AMI has denied it helped Trump’s campaign, although Pecker was recently granted immunity as part of the Cohen probe. Former FEC commissioner Trevor Potter, the head of the nonprofit Campaign Legal Center, last week said the situation “presents a serious legal problem for AMI.” If those legal troubles end up depressing the market value of AMI, teachers, firefighters, cops and other public employees also could potentially suffer losses at a time when their pension funds are already facing shortfalls.

A New Jersey Treasury Department spokesperson said in an email that its Division of Investment "is in regular contact with its investment partners regarding underlying portfolio companies and provides feedback when appropriate. While DOI plays no role in the management of a fund's portfolio companies, it expects the funds to invest in good businesses with strong management teams that follow all applicable laws."
"I am personally appalled by the Enquirer being an accessory to Cohen's criminal behavior on behalf of the candidate," said Tom Bruno, a state union representative who is the chairman of the pension's board of trustees and serves on New Jersey's State Investment Council, which oversees the pension system's investments.
"If asked to vote, I can assure you I will be voting for us to divest," he said. "I cannot talk on behalf of the entire SIC, but I will be doing everything in my power to convince a majority to vote the same way."

Chatham did not respond to questions about how exposed taxpayers and pension systems might be to AMI and any financial consequences of its legal entanglements. A spokesman for the Ohio pension system said Thursday that the state asked for its money to be withdrawn from the Chatham fund in 2015; the money was redeemed in 2017.

In 2013, former New Jersey Gov. Chris Christie’s administration moved $300 million of pension cash into the Chatham Fund, LP, which has owned a stake in AMI, according to SEC records. Last year, barely three months before Christie left office, his administration steered another $200 million to another Chatham vehicle. AMI gave $10,000 to a super PAC supporting Christie’s 2016 presidential bid, and Mother Jones reported that Christie placed Pecker on his campaign leadership team.

In 2013 and 2014, an Ohio pension system partially controlled by Gov. John Kasich’s appointees committed $150 million to Chatham. The hedge fund finalized its deal to buy an ownership stake in AMI in the summer of 2014.

The Christie administration’s shift of $500 million into Chatham makes New Jersey retirees a substantial investor in the hedge fund, which manages $3.2 billion in assets, according to state records. Those records show the original $500 million investments are now worth as much as $692 million.

Best known for its lurid Enquirer headlines (“Aliens Are Living in My Toilet”), AMI has been beset by a difficult environment for print publications. Chatham has warned that its investments are risky and that a client “may lose its entire investment in a troubled company.” In early 2018, private equity giant Blackstone removed Chatham from one of its major investment funds.

Along with the public pension funds, four other private pension funds -- including those for Ford and Toyota Motors employees -- have had investments with Chatham, according to financial research firm Preqin.

Attorney Jay Youngdahl, a former Harvard researcher who has served as a steelworkers pension trustee, said state officials may be able to take action to try to protect retiree investments.

“There are often clauses in agreements between pension funds and hedge funds that give states certain rights and recourse if they believe retirees’ money has been invested in companies engaging in criminal activity,” he said.

This story has been updated from its original version.

This piece was reported by David Sirota of Capital & Main and Andrew Perez of MapLight and published in partnership with Fast Company.