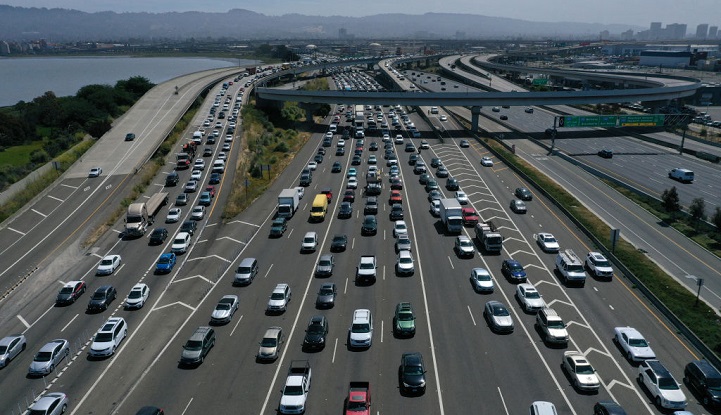 Traffic near the San Francisco-Oakland Bay Bridge toll plaza along Interstate 80 in California in July of 2019.
Photo by Justin Sullivan/Getty Images.

Senators who have refused to cosponsor a resolution affirming California’s ability to enforce vehicle fuel economy standards to limit greenhouse gas emissions have received almost 15 times more campaign money from major oil and gas interests than lawmakers supporting the measure, according to a MapLight analysis.

President Trump announced last month that he was revoking a federal waiver under the Clean Air Act that has allowed California to set its own auto emissions standards since 1970 — touching off a legal battle about whether states have the ability to set stricter fuel efficiency standards than the federal government. After the announcement, lawmakers in both the U.S. Senate and House introduced resolutions condemning the administration’s cancellation of California’s waiver and affirming states’ rights to adopt their own fuel standards in efforts to address climate change.

Last year, a New York Times investigation found the oil industry was influential in pushing for the rollback of the federal fuel efficiency standards — with portions of correspondence between lawmakers and regulators lifted directly from oil industry talking points.  The financial stakes for the oil industry in limiting more stringent fuel economy standards are clear: Higher standards would lead to less oil consumption and lower profits. More than 70 percent of oil consumption in the United States is devoted to transportation.

The MapLight analysis considered contributions given in the 2018 election cycle for House members and contributions given in 2014, 2016, and 2018 election cycles for Senators. Contributions are from ExxonMobil, ConocoPhillips, Chevron, Kinder Morgan, Phillips 66, EOG Resources, Marathon Petroleum, Energy Transfer LP, Valero Energy, Occidental and Anadarko. These are the 10 largest U.S. energy companies, according to Yahoo sectors as of Sept. 24, 2019