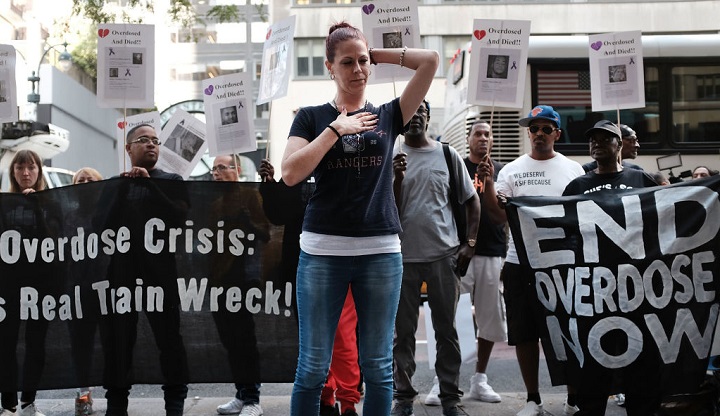 Activists rally to call for action to combat the overdose epidemic outside of the office of Governor Andrew Cuomo on August 17, 2017 in New York City.
Photo by Spencer Platt/Getty Images.

Even as an epidemic of painkiller abuse was blamed for record numbers of overdoses and reduced life expectancy, the nation’s largest opioid distributors, their subsidiaries, and employees gave more than $23 million in campaign contributions to federal candidates over the last decade.

The 1,340 federal candidates -- including almost 500 current members of Congress -- who accepted the money ranged from well-known veteran lawmakers such as Rep. Ron Kind, a Wisconsin Democrat who netted $210,000 from the companies, to newer legislators such as Rep. Chris Pappas, a New Hampshire Democrat who received a $15 contribution in his winning 2018 campaign.

Lawmakers representing congressional districts or states with higher-than-average rates of opioid use have been among the biggest recipients of campaign contributions from the pharmacy and retail distributors, a MapLight analysis of data obtained by HD Media and The Washington Post found. Even as lawmakers issued approximately 2,000 statements about the crisis, the money pouring into their campaigns suggests a major reason for a legislative focus on demand, rather than supply.

While the biggest share of painkillers poured into Appalachia, the MapLight analysis found that the 10 largest opioid distributors spread their contributions across the country. Kind, whose district borders Iowa and Minnesota, was the biggest House recipient of funds from opioid distributors, reporting $210,000 in donations. At least 563,000 grams of oxycodone and hydrocodone -- roughly 1,000 milligrams of painkillers for every man, woman, and child -- were distributed in his district between 2006 and 2012.

Like many lawmakers, Kind decried the epidemic. He cosponsored a five-point plan to attack opioid abuse in 2018, noting that emergency room visits for opioid overdoses doubled in Wisconsin over a single year.

“Our drug epidemic is an all-hands-on-deck moment in Wisconsin,” he said.

The legislation, which passed the House but died in the Senate, called for more law enforcement support, expanded access to treatment, encouragement of alternative pain treatments, improved prescribing practices, and increased access to mental health care -- but offered no plans that would discourage distributors.

Former House Speaker Paul Ryan, R-Wisc., took $155,635 from the largest opioid distributors, placing him among the biggest recipients of campaign dollars from the 10 corporations. The American Action Network (AAN), a conservative nonprofit “dark money” organization affiliated with Ryan and the House GOP, spent $2.5 million during the 2018 midterm elections to persuade voters that Republicans were working to curb the epidemic. (Between 2016-17, AAN received $7.5 million from Pharmaceutical Research and Manufacturers of America, a drug industry trade group that has counted opioid manufacturers Purdue Pharma and Mallinckrodt Pharmaceuticals among its members.)

The DEA data showed that the two primary counties in Ryan’s district received 601,000 grams of pain pills, or about 1,650 milligrams for every resident.

“This epidemic does not care about political party, social status, age, race or hometown,” Ryan wrote in a 2018 op-ed piece for the Milwaukee Journal Sentinel. “It does not care about where you’ve been -- or where you’re going -- it simply rips the livelihood from whoever is caught in its path.”

The opioid epidemic may have ripped the livelihood from tens of thousands of Americans but proved to be very good business for the largest distributors, which ranged from ubiquitous retailers like Walmart and CVS to lower-profile operators such as J.M. Smith Corp., a privately held South Carolina wholesaler.

Walmart, the nation’s largest private employer, acknowledged the existence of the epidemic and began rolling out a corporate stewardship program in 2017 that included limiting prescriptions to a seven-day supply. The retail giant has said it will attempt to curb abuse by requiring all pain medicine prescriptions to be filed electronically by 2020.

“We stand ready to work with our nation’s leaders on a solution to combat prescription drug addiction and misuse,” Greg Foran, the company’s chief executive, said in a 2017 statement.

Meanwhile, Walmart emerged as the top donor among opioid distributors, handing out almost $7.7 million to federal candidates during the decade. Rep. Steve Womack, an Arkansas Republican whose district includes Walmart’s Bentonville headquarters, received more than $190,000 from the retailer, making him the second-biggest recipient of campaign donations from the large opioid distributors.

Walmart, CVS, Walgreens, Cardinal, McKesson, AmerisourceBergen, and Rite Aid are among the defendants in a federal lawsuit filed by roughly 2,000 city, county, and tribal governments. The Ohio lawsuit claims the distributors should have taken action to curb the flow of billions of pain pills through their businesses but instead prioritized profits over people. Similar lawsuits around the country are pending, seeking billions in damages for the epidemic that claimed an estimated 180,000 lives between 2000 and 2015.

Reps. Tulsi Gabbard, D-Hawaii, and Ro Khanna, D-Calif., introduced one of the few bills aimed at curbing opioid distribution in May. The bill, the Opioid Crisis Accountability Act, would penalize corporations with a fine on 75 percent of their profits from opioid sales “during the period in which the corporate entity engaged in dubious marketing or distribution practices.” Although the legislation is primarily targeted at pharmaceutical manufacturers, it would also penalize corporations or people who are “knowingly supplying states or communities with a quantity of opioids that the person knows is not medically reasonable.”

The bill, which was introduced in the Senate by Vermont independent Bernie Sanders, would impose a fine on chief executives equal to their salaries, as well as any stock gains. Other top corporate executives could lose as much as 25 percent of their salary and stock gains.

“While some of these companies have made billions each year in profits, not one of them has been held fully accountable for its role in an epidemic that is killing tens of thousands of Americans every year,” said Sanders, a leading contender for the 2020 Democratic presidential nomination. “At a time when local, state and federal governments are spending many billions of dollars a year dealing with the impact of the opioid epidemic, we must hold the pharmaceutical companies and executives that created the crisis accountable.”

Sanders accepted $1,165 in campaign donations from the top opioid distributors for his Senate campaign; his 2016 and 2020 presidential campaigns reaped more than $136,000 from employees of the 10 corporations. Gabbard, also a 2020 contender, has taken $14,000 from the corporations for her House campaigns and another $350 for her presidential bid. Khanna, who was elected in 2016, reported no contributions from the largest opioid distributors.

The Drug Enforcement Administration data confirms the conventional wisdom that the epicenter of the opioid epidemic occurred in Appalachia. Seven of the 10 U.S. counties with the highest per-capita distribution of opioids were in Tennessee, Kentucky, and West Virginia.

The MapLight analysis found that Hamblen County, Tenn., ranked highest on a per-capita basis for opioid distribution, with enough pain medicine to have provided every person with 12,000 milligrams between 2006 and 2012. The county is represented in Congress by Rep. Phil Roe, a retired Republican obstetrician who’s taken no money from opioid distributors.

Roe, however, is the exception. In neighboring Kentucky, Senate Majority Leader Mitch McConnell, a Republican who has blocked campaign finance reform measures from being considered by lawmakers, collected more than $154,000 from the largest distributors during the decade. The average resident of McConnell’s state received 2,840 milligrams of pain medicine between 2006 and 2012, according to the DEA data. The state had the third-highest age-adjusted rate of drug overdose deaths in 2017, according to the Centers for Disease Control and Prevention.

Almost 3,190 milligrams of painkillers per capita were handed out in West Virginia during the six-year period. The state’s pill consumption trailed only Florida (3,300 milligrams per person) and Delaware (3,255 milligrams). Sen. Joe Manchin, D-W.Va., whose website has had an entire section devoted to opioid issues since 2011, has introduced at least 19 separate bills to address the opioid crisis while taking $49,550 from employees of the six largest distributors.

Manchin acknowledged the political power of the distributors in a 2012 interview after a proposal to require new prescriptions for hydrocodone was shot down in the Senate. “We don’t want to put anybody out of business,” he told the New York Times. “But perhaps the chain pharmacies and druggists need to change their business model a bit.”