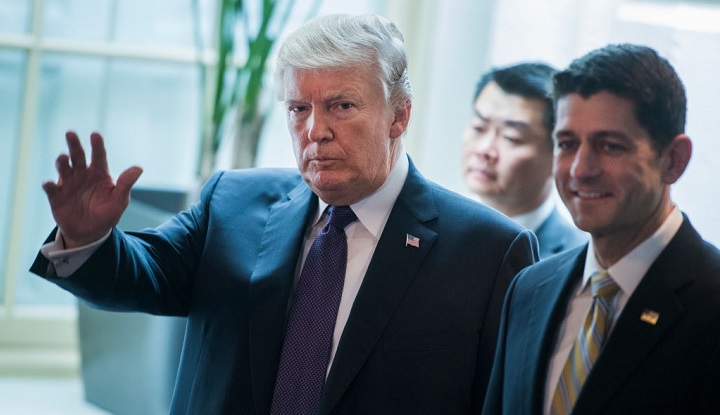 President Donald Trump and Speaker Paul Ryan leave a meeting to discuss an overhaul to the tax code in November.
Photo By Tom Williams/CQ Roll Call.

The 10 biggest contributors to super PACs in the 2016 election could have saved $150 million by making tax-deductible donations to nonprofits due to a proposed overhaul of the U.S. tax code, according to a MapLight analysis of Open Secrets data.

Repealing the ban on political activity by charitable and religious organizations, known as the “Johnson Amendment,” has been a priority for evangelical leaders, and a repeal was included in a House version of the tax overhaul. Although President Donald Trump and the GOP have framed repealing the ban as providing freedom for religious leaders to speak about candidates, the version passed in the House eliminates existing restrictions for any tax-exempt charity - which could have the effect of turning any charity into a potential vehicle for a campaign while reducing taxes for major political donors.

The nonpartisan election law organization Campaign Legal Center warned that eliminating the Johnson Amendment could lead to a new wave of “‘super dark money groups’ - groups organized as charities or religious organizations that will operate as tax-deductible vehicles for wealthy donors to secretly influence elections.”

In 2016, the top 100 individual contributors to super PACs poured a combined $768 million into independent expenditure committees - almost half donated from just 10 individuals or couples. Assuming each contributor falls into the nation’s highest tax bracket at 39.6 percent, the top 100 mega-donors could have saved more than $300 million by transferring their political giving to tax-deductible nonprofits.

More than 5,500 organizations have signed onto a group letter opposing repeal of the Johnson Amendment. The Johnson Amendment, they write, “shields the entire 501(c)(3) community against the rancor of partisan politics so the charitable community can be a safe haven where individuals of all beliefs come together to solve community problems free from partisan divisions.”

Additionally, more than 4,000 faith leaders have come out against repeal, which they argue would “harm houses of worship, which are not identified or divided by partisan lines.”

MapLight analysis of “Top Individual Contributors to Super PACs” from OpenSecrets.org, retrieved on Dec. 13, 2017. The tax rate shown is based on the top marginal income tax rate for 2016, not effective tax rates for the specific donors.