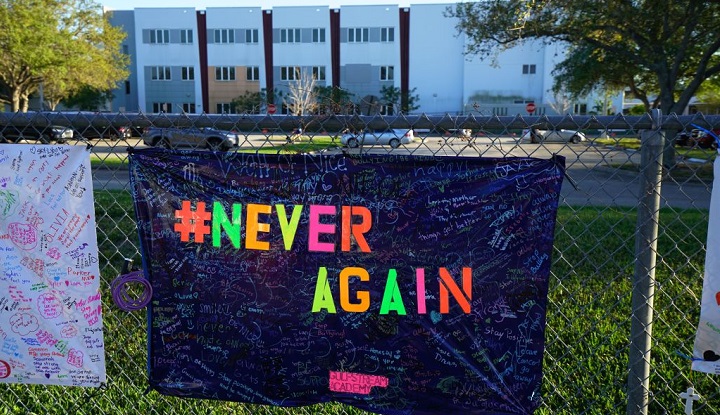 Memorials outside Stoneman Douglas High School in Parkland, Florida, where 17 children and teachers were killed by a lone gunman with an assault weapon on February 14, 2018.
Photo by Giles Clarke/Getty Images.

House members who have not shown support for a ban on assault weapons received more than 130 times more campaign money from pro-gun interests during the last election cycle than members who support a ban, according to a new MapLight analysis.

Pro-gun interests contributed an average of $8,671 during the 2016 election cycle to House members who have declined to co-sponsor a new ban on assault weapons. Lawmakers supporting a ban received an average of $64 during the same period, according to a review of data compiled by the Center for Responsive Politics.

The bill, H.R. 5087, would make it a crime to import, sell, manufacture, transfer, or possess a semiautomatic assault weapon. So far, the proposal has failed to gain a single Republican co-sponsor. Of the 172 co-sponsors of the House bill, only Tim Walz, D-Minn, and Ben Ray Lujan, D-N.M., received money from pro-gun interests. Twenty-one House Democrats have so far resisted sponsoring the measure. Six received $2,500 or more from pro-gun interests.

A similar measure in the Senate introduced by Sen. Dianne Feinstein, D-Calif., has also failed to attract any Republican support.

Support for stricter requirements on guns has climbed in the wake of last month’s school shooting at Marjory Stoneman Douglas High School in Parkland, Fla. According to recent polling from Politico, 68 percent of voters support banning assault-style weapons, while 25 percent oppose a ban. Seven percent have no opinion.

Congress passed a ban on assault weapons in 1994, but the ban expired 10 years later.

MapLight analysis of campaign contributions to House members in the 115th Congress from PACs and employees of the pro-gun industry from Nov. 29, 2014, to Nov. 28, 2016. Contributions data source: OpenSecrets.org.