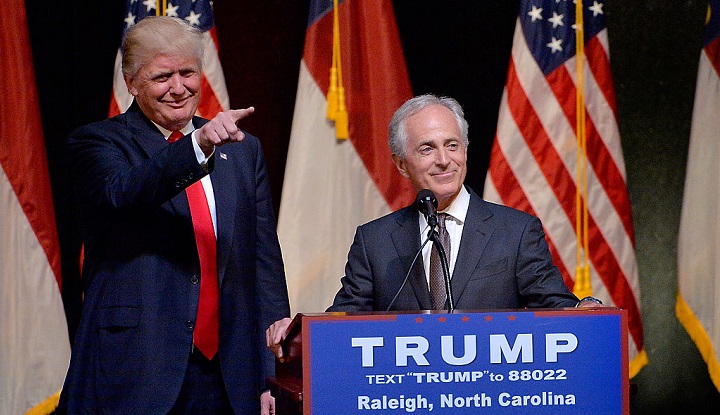 This story was reported in partnership by Andrew Perez  of MapLight and David Sirota and Josh Keefe of the International Business Times.

The top aide to Sen. Bob Corker, R-Tenn., has major investments in a real estate business that could benefit from a key provision slipped into the Republican tax bill that his boss will be voting on, according to federal documents reviewed by International Business Times and MapLight.

The records show Corker’s longtime chief of staff, Todd Womack, has increased his real estate investments in recent years while working as the senator’s top adviser. Womack’s limited liability corporation (LLC) generated at least $157,000 in income in 2016, according to financial disclosure forms filed in May.

Corker, a commercial real estate investor who’s among the Senate’s wealthiest members, switched his position on the tax bill and announced his support for the final legislation after it was amended to include a provision expanding tax cuts for real-estate-related LLCs. Congressional Democrats have questioned whether Corker switched his vote in exchange for the provision -- a charge Corker has denied. He was the only Republican to vote against the original Senate version of the bill, which included restrictions on tax benefits for real estate-related LLCs.

In an effort to quell a national firestorm about Corker’s reversal, Sen. Orrin Hatch, the Utah Republican who leads the Senate Finance Committee, took credit for the provision on Monday. Hatch wrote in a letter to Corker that he was “unaware of any attempt by you or your staff to contact anyone on the conference committee regarding this provision or any related policy matter."

A Corker spokesman, Micah Johnson, told IBT/MapLight that “neither Senator Corker nor any member of our staff had involvement in crafting the legislation. We requested no specific tax provisions throughout the months-long debate and had no knowledge of the pass-through provision in question.” She did not respond to questions about Womack’s real estate investments. Corker previously said he had not read the text of the tax bill.

Corker potentially has much to gain from the provision. The retiring lawmaker made as much as $7 million in 2016 from his real estate-related LLCs, which means the tax provision could save him as much as $1.2 million, according to the Center for Economic Policy and Research. Records obtained by IBT and MapLight show Womack, the lawmaker’s top adviser, could also potentially benefit from his boss’s pivotal vote on the bill.

“This helps people who have held property for awhile, like Donald Trump,” David Kamin, a New York University law professor who served as a special assistant to the president for economic policy in the Obama administration, previously told IBT. “If you’ve got an LLC that’s a trade or business with a bunch of real estate holdings and few employees, [I] think you’re now golden. You get the deduction.”

Corker and Womack are not the only public officials who stand to benefit from the provision. President Trump earned at least $41 million of rental income through LLCs in 2016. Republican congressional leaders and GOP lawmakers sitting on the committees overseeing the tax legislation made between $2.6 million and $16 million through real-estate or property-related partnerships, IBT found.

The provision in the final bill was part of a larger 20 percent deduction for “pass-through” entities -- businesses that aren’t obligated to pay corporate taxes, but instead pass income onto partners, who are taxed at the personal level. While the Senate limited the deduction to pass-through businesses that paid out wages, the final version of the bill contained a controversial new provision that allows pass-throughs with large property holdings and no employees to get the deduction.