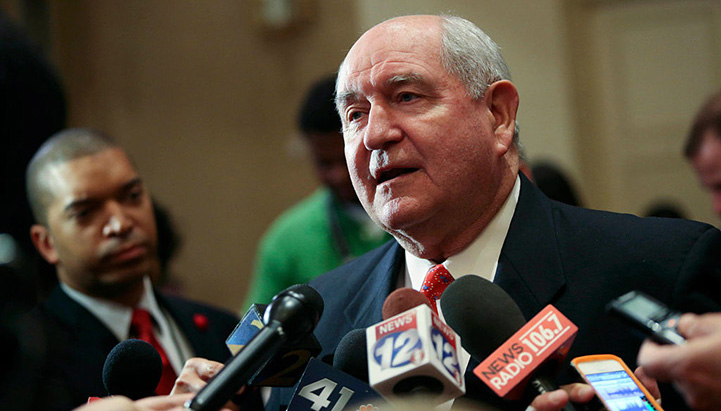 March 21, 2017 -- President Donald Trump’s choice to lead the U.S. Department of Agriculture, Sonny Perdue III, has received almost $1 million over the last two decades from the industry that he’ll be required to regulate, a MapLight analysis of data from the National Institute of Money in State Politics shows.

Perdue has received a total of nearly $20 million in contributions since the 1992 election cycle. Perdue was elected to the Georgia Senate in 1992 and served there until 2001. He was elected as the state’s governor in 2002, a post he held until 2011.

During his political career in Georgia, Perdue has received about $3.7 million from the finance, insurance and real estate sector, the largest share of the contributions he received. Four other industries have provided his campaigns with more money than the agriculture business.

Perdue, however, has benefitted from donations from corporate agriculture interests. About 40 percent of his total contributions came from corporations or other non-individual donors, a much higher share than other Trump Cabinet selections who held state offices, such as former Texas Gov. Rick Perry (Department of Energy) and former Oklahoma Attorney General Scott Pruitt (Environmental Protection Agency).  And within the agriculture industry, almost half of his contributions were made by non-individuals, including companies such as Monsanto, John Deere and Tyson Foods.

Perdue received financial support from a range of corporate agricultural interests. Corporate donations made up more than half of all contributions within the poultry and eggs, timber, paper manufacturing and agricultural chemicals sectors.

A Senate confirmation hearing for Perdue is scheduled to take place on Thursday.