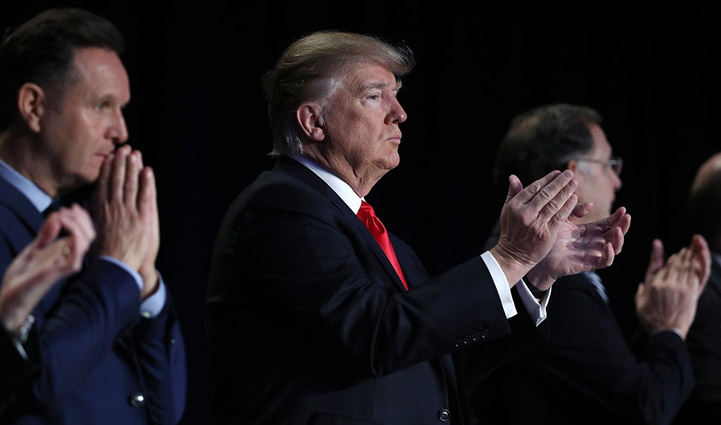 February 2, 2017 -- President Donald Trump’s vow to “totally destroy” restrictions on campaign activity by nonprofit groups, including religious organizations, has the potential to boost the political power of evangelical groups such as Pat Robertson’s Christian Broadcasting Network that supported his long-shot presidential campaign.

The Virginia Beach, Va.-based CBN, which reported more than $300 million in revenues during its most recent tax period, is one of several conservative organizations likely to expand its political activity if Trump can persuade Congress to essentially break down the long-standing wall between charities and political activity.

The ban, known as the “Johnson Amendment,” was named for Lyndon B. Johnson, who pushed legislation through in 1954 after his U.S. Senate reelection effort was imperiled by outside spending from a conservative nonprofit. Under the law, charitable organizations are “absolutely prohibited from directly or indirectly participating in, or intervening in, any political campaign on behalf of (or in opposition to) any candidate for elective public office.” Groups that violate the law could lose their tax-exempt status.

Other religious organizations that could play a larger role in American politics if the ban is lifted include the Charlotte, N.C.-based Billy Graham Evangelistic Association and its offshoots, which reported about $132 million in revenue, and the Colorado Springs, Colo.-based Focus on the Family, which said it received $86.5 million in revenues. Leaders of both organizations signaled their support for Trump’s positions during the 2016 campaign.

But a repeal, pushed by Trump at the National Prayer Breakfast on Thursday, isn’t likely to be viewed in the same light by all 133,000 U.S. religious-based nonprofit groups. A September 2016 report by LifeWay Research, an organization that provides custom research to churches, found almost three-quarters of evangelicals would consider it inappropriate for pastors to endorse candidates from the pulpit.

Although Trump’s speech was aimed at an evangelical audience, IRS data shows those organizations constitute a fraction of religious nonprofits. The nation’s largest nonprofit religious organization -- based upon annual revenue -- is the American Lebanese Syrian Associated Charities, the Memphis, Tenn.-based fundraising arm of the St. Jude Children’s Research Hospital. The nonprofit reported receiving almost $1.2 billion in revenues, according to the latest Internal Revenue Service data.

The hospital’s founder, the late Danny Thomas, was the son of Lebanese immigrants. The Trump Administration’s moratorium on immigrant visas for people attempting to leave seven majority Muslim countries, including Syria, has sparked widespread protests across the nation. The moratorium also has put at least one St. Jude patient’s family in limbo -- the father of an Iranian woman who was treated at the hospital for leukemia has been unable to visit his daughter. Meanwhile, her mother, who came to the U.S. before the moratorium was enacted, is afraid she won’t be allowed to return to visit her child if she leaves the country.

The second-largest religious nonprofit by revenue, Compassion International, was created in 1952 as an organization designed to help poor children around the world. The Colorado Springs organization reported slightly more than $800 million in revenues, according to the IRS. The group provides food, medical and education assistance to children in 26 countries, including Mexico.

The largest religious nonprofit in the U.S. by asset size is the Catholic United Investment Trust. The Chicago-based group, which reported more than $4.5 billion in assets during its latest available tax filing, is an investment entity guided by the teachings of the Catholic Church. Its titular head, Pope Francis, has criticized the president’s plan to build a wall at the U.S.-Mexico border, calling it “not Christian.”