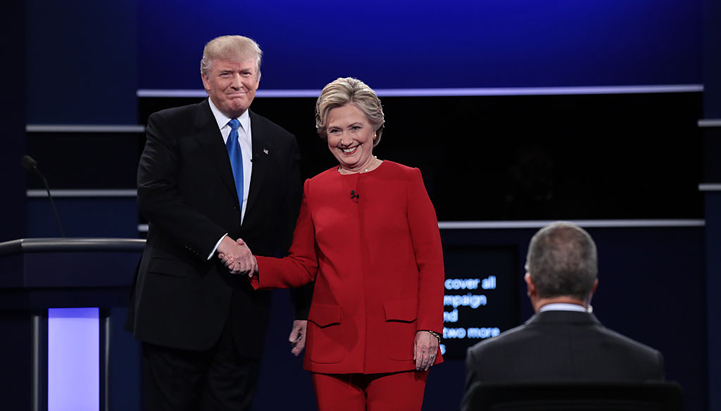 A campaign finance watchdog group is calling on federal election regulators to investigate whether Donald Trump and Hillary Clinton’s presidential campaigns have illegally coordinated with super PACs supporting them.

Two pro-Trump super PACs -- Make America Number 1 and Rebuilding America Now -- may have made prohibited in-kind contributions to the Trump campaign, the Campaign Legal Center said Thursday. The Washington-based organization said a pro-Clinton organization, Correct the Record, may be guilty of similar violations.

Because super PACs can accept unlimited contributions, federal law requires them to operate independently of campaigns. Super PACs are relatively new political entities, created in the wake of the Supreme Court’s 2010 Citizens United decision. Candidates and outside groups have tested the legal boundaries surrounding them, especially in the current election cycle. So far, super PACs have raised more than a half-billion dollars in support of the 2016 presidential nominees.

The Campaign Legal Center filed complaints against the campaigns and super PACs on Thursday with the Federal Election Commission. It’s unlikely the commission will decide before the election whether to take any actions.

Lawyers from the Campaign Legal Center say that argument is misleading, because Correct the Record has made “coordinated expenditures,” which would also be considered in-kind contributions. They add that Correct the Record’s payments to its staff would represent prohibited donations if its employees’ work was done in coordination with the Clinton campaign.

“The factual record demonstrates that the vast majority of Correct the Record’s expenditures have been for activities like opposition research, message development, surrogate training, reporter pitches, media booking, video production, ‘rapid response’ press outreach, and other ‘earned media,’” the complaint says. “Any such expenditures made in ‘cooperation, consultation, or concert, with, or at the request or suggestion of’ Clinton’s campaign committee constitute in-kind contributions to the campaign.”

Since June 2015, the Clinton campaign has paid $282,000 to Correct the Record, which the super PAC has characterized as payments for “research,” according to campaign finance records.

Trump was slow to warm up to super PACs, disavowing support from outside groups during the Republican primary, but his campaign is deeply tied to two groups that want to help him defeat Clinton this November. One of those organizations, Rebuilding America Now, is headed by former top staffers to the Trump campaign.

Campaign staffers who have knowledge of a candidate’s strategy and plans are required to go through a 120-day “cooling-off period” before joining a supportive super PAC. However, a MapLight investigation published in August found that Rebuilding America Now began paying its political director, Ken McKay, only days after he left his job as a senior adviser to the Trump campaign. Reuters subsequently reported that Rebuilding America Now paid another operative, Laurance Gay, right after he left a position with Trump.

Rebuilding America Now has said both consultants were only unpaid volunteers for the Trump campaign and possess no strategic knowledge from their time working for the real estate mogul.

According to the Campaign Legal Center, McKay and Gay qualify as employees of the Trump campaign, regardless of whether they were paid for their services. The group asserts the Rebuilding America Now operatives acquired “inside information” while they were with the Trump campaign, and adds that there’s “strong reason to believe” that McKay and Gay have used that information in crafting communications in support of Trump.

The complaint also concerns the closeness between the Trump campaign and Make America Number 1. The Campaign Legal Center says that the super PAC may have made prohibited “coordinated communications” by employing common vendors.

Cambridge Analytica, a Mercer-owned data firm, has done work for both the Trump campaign and Make America Number 1. In August, the firm was paid $250,000 by Trump and more than $400,000 by the super PAC. That same month, the Trump campaign hired Breitbart News chief Stephen Bannon as its chairman, reportedly at the behest of the Mercer family. Robert Mercer has invested in Breitbart, and Bannon helped Mercer launch Cambridge Analytica, according to RealClearPolitics.

Kellyanne Conway, who’s serving as campaign manager for Trump, previously helped lead Make America Number 1 when it was a pro-Cruz effort. Her consulting firm has since been paid by both the super PAC and the Trump campaign. Make America Number 1 paid $247,000 to Conway’s firm, The Polling Company, on Aug. 23. One week later, the Trump campaign paid the company $128,000.

The Trump and Clinton campaigns and the super PACs included in the Campaign Legal Center complaints did not immediately respond to requests for comment.