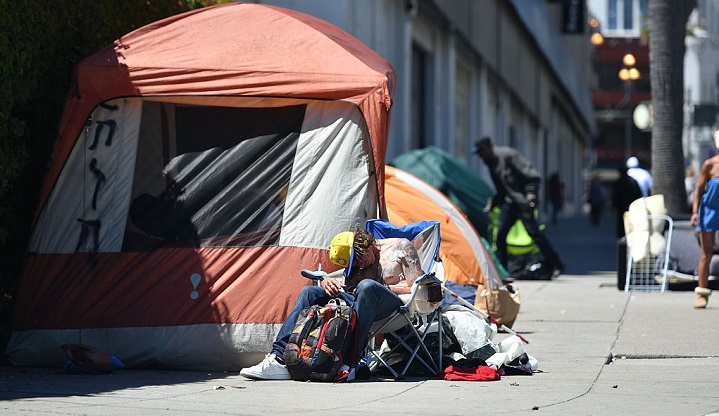 A homeless man sleeps in front of his tent along Van Ness Avenue in San Francisco in 2016.
Photo by JOSH EDELSON/AFP/Getty Images.

Donors opposing a ballot measure to fund more homeless services in San Francisco with a new tax on its wealthiest companies previously bankrolled a successful 2016 initiative to ban tent encampments in the city.

Proposition C, which will be on San Francisco ballots on Tuesday, would almost double the city’s annual homelessness budget by increasing the gross receipts tax by an average of .5 percent for businesses with more than $50 million in annual revenue each year. Supporters contend the initiative would provide housing and new shelter beds for thousands of homeless people over 10 years. It also would fund mental health and drug addiction programs. Some financial services companies could pay a higher tax than other businesses under the proposal and have come out against the measure.

The campaign against Proposition C has received almost $550,000 from the San Francisco Chamber of Commerce’s political action committee; the Hotel Council of San Francisco PAC; venture capitalist Michael Moritz; and the Committee on Jobs Government Reform Fund, which represents business interests in the city. Those same donors contributed almost $600,000 to support Proposition Q, a 2016 initiative that allows the city to clear homeless encampments from sidewalks as long as residents are offered a bed at a shelter or a bus ticket to leave San Francisco.

“Proposition C opponents can easily be described as wealthy, tone-deaf, self-interested, and heartless, even if they have been longtime donors to homeless causes,” Moritz, a billionaire, wrote in a recent Wall Street Journal column. In 2016, he donated $49,999 in support of Proposition Q.

California is one of the wealthiest states in the country and also has the highest poverty rate in the United States when cost of living is considered. The disparity is especially pronounced in the Bay Area, home to the nation’s tech booming industry and a spectacular housing shortage. Despite San Francisco’s reputation as a liberal utopia, a United Nations special report published in September found that the city’s efforts to criminalize homelessness and break up encampments constitute “cruel and inhuman treatment” and violate human rights.

While Proposition C’s proponents have significantly outraised their opponents, the measure has split San Francisco’s business community. Marc Benioff, the CEO of Salesforce, a major San Francisco employer, has donated more than $2 million to support the initiative, while his company has given $5.9 million. Local payment processing companies Square and Stripe have opposed the initiative, arguing they would be hit hard because the city classifies them as financial services companies -- which would be taxed at higher rates -- and not as tech companies.

San Francisco Mayor London Breed was elected this summer on a pledge to clean up the city’s streets, but she said last month that Proposition C “puts the cart before the horse and then sends both down a dead-end street.”

This story was produced by MapLight and published in partnership with the San Francisco Public Press.