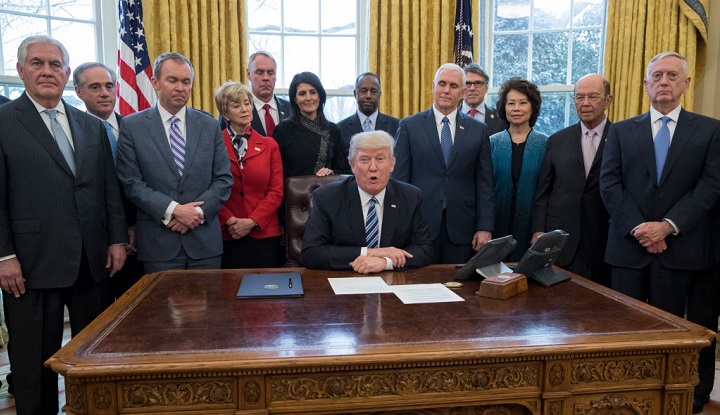 President Trump with members of his Cabinet in the Oval Office of the White House.
Photo by Michael Reynolds-Pool/Getty Images.

Legislation being debated this week by the U.S. Senate could save top members of the Trump administration an average of six figures on their annual tax bills if it includes a full repeal of former President Barack Obama’s signature health care reform law, according to a MapLight analysis.

The analysis of financial disclosure forms found the repeal of a 3.8 percent tax on investment income -- used to fund subsidies that provide health coverage to roughly 10 million low- and middle-income Americans -- would have saved Trump and his top two dozen officials between $3.1 million and $7.8 million, leading to an average tax reduction ranging from $124,200 to $313,700.

The MapLight analysis highlights another potential conflict of interest for the Trump White House, which has lobbied furiously for a repeal of the 2010 Affordable Care Act, otherwise known as Obamacare. Trump already has been criticized for violating the emoluments clause of the U.S. Constitution, which forbids the nation’s presidents from profiting from their tenure in the White House. The president also has refused to release his tax returns -- a move that could alleviate fears that he’s using his office for financial gain.

Unlike a House measure that passed in May, the Senate is considering keeping the tax. If the Senate is able to pass legislation -- with or without the tax --  differences between the two chambers would be sorted out in a conference committee before a bill could be sent to the president for his signature. A health care bill may not be the end of the matter; both White House and House GOP plans to change the nation’s tax code also contemplate getting rid of the 3.8 percent tax.

Two of three potential health-care measures touted by the Trump administration would have clearly benefitted his Cabinet by eliminating the net investment income tax. The House measure, which won approval by a 217-213 vote, would have meant as many as 23 million Americans would lose health insurance over the next decade. It wasn’t considered by the Senate.

“We are all pushing hard -- must get it right!” Trump tweeted in early June.

A second plan to repeal and replace Obamacare was dropped by the Senate earlier this month after GOP Senate leaders failed to muster enough support for their own version, which would have kept the tax while placing health insurance out of reach for an additional 22 million Americans.

After support for the Senate bill waned, Trump pushed a simple Obamacare repeal -- which would have done away with the tax -- that senators initially refused to even consider. Repealing the law without a replacement would have increased the number of uninsured Americans by 32 million over the coming decade, the Congressional Budget Office reported. Senate Majority Leader Mitch McConnell pushed for a vote on a partial repeal on Wednesday; it was rejected by a 55-45 vote.

McConnell’s wife, Transportation Secretary Elaine Chao, would save between $5,388 and $15,250 if Obamacare is completely repealed.

Eliminating the investment income tax would disproportionately benefit the wealthy. The Tax Policy Center, a nonpartisan, Washington-based research organization, estimated that the top 0.1 percent of American earners -- households that report more than $3.9 million in annual income -- would save an average of $207,000 after the change was implemented. Low-income households would save about $150 annually, the center said.

Although Trump’s Cabinet is the wealthiest in U.S. history, not all of its two dozen members would benefit equally from the tax cut, according to the MapLight analysis. Three members -- Vice President Mike Pence, U.N. Ambassador Nikki Haley, and Labor Secretary Alexander Acosta -- wouldn’t have made more than $7 from a repeal of the investment income tax. Central Intelligence Agency Director Michael Pompeo, a former Kansas congressman, would have seen his potential tax cut top out at $31.

Even so, more than a quarter of Trump Cabinet members stood to gain more than the average American household earns in a single year. Two members -- Education Secretary Betsy DeVos, and Commerce Secretary Wilbur Ross -- could have saved more than $1 million, based on financial disclosure reports. Treasury Secretary Steven Mnuchin, a former Goldman Sachs executive, could have saved as much as $890,400 from the tax repeal.

DeVos, who married into a family that created the multi-level marketing scheme known as the Amway Corp., stood to gain the most, with a potential tax cut that would have ranged from $1.95 million to $4.15 million, according to the analysis.

Trump, a real estate developer who has parlayed his fame into a reputed multibillion-dollar licensing and reality television show fortune, has stacked his Cabinet with wealthy individuals. More than half have a net worth that exceeds $1 million; Ross and McMahon are both billionaires. By contrast, half of all Americans have a net worth of less than $45,000.

Price, a physician, traded hundreds of thousands of dollars’ in health-care stocks while voting on health-care issues during his 12-year congressional tenure. Price claimed the trades were legal and transparent; former U.S. Attorney Preet Bharara was investigating the trades as a potential conflict of interest that violated a 2012 congressional insider-trading law when he was fired by Trump, according to ProPublica, an online investigative news site.

MapLight analysis of financial disclosure reports for President Trump and the members of the Cabinet based on filings from the U.S. Office of Government Ethics. For the purposes of this analysis, income reported under “Other Assets and Income” is assumed to be subject to the 3.8% net investment income tax. This data includes income earned by the filer, the filer’s spouse, and any dependent children. Income is reported for the preceding calendar year to the filing date, varying for each filer, and was prorated to a period of one year. All members of the Cabinet were assumed to qualify for the tax.