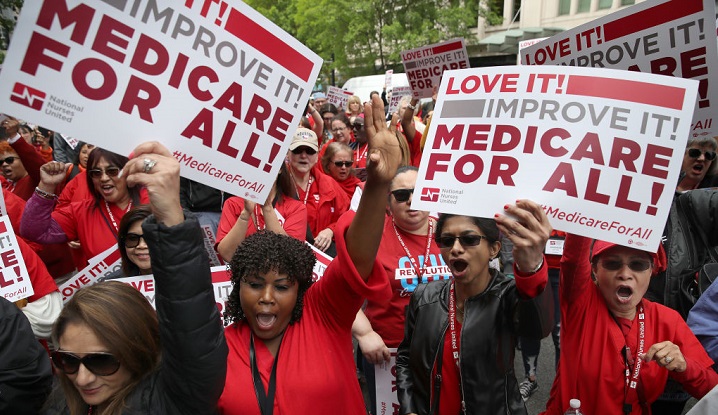 Protesters supporting “Medicare for All” hold a rally outside PhRMA headquarters in April, 2019 in Washington, DC.
Photo by Win McNamee/Getty Images.

Pharmaceutical Research and Manufacturers of America (PhRMA), one of the most powerful lobbying groups in Washington, reported donating $2.5 million last year to the American Action Network (AAN), a secretive nonprofit linked to House Republican leaders. PhRMA has donated at least $10 million to AAN since 2016. PhRMA also donated a nominal sum to a centrist think tank founded by the Democratic Leadership Council (DLC).

PhRMA is a member of the Partnership for America’s Health Care Future, a health care industry coalition created last year to defeat Medicare for All. Pharmaceutical companies stand to lose big under a single-payer system, since it might enable the government to negotiate lower drug prices. The U.S. spends nearly twice as much on drugs for individuals than other wealthy countries.

This summer, AAN published a memo highlighting attack lines against Medicare for All, recommending that people call it “socialist” and say that it “would mean doctor shortages, longer wait times for urgent medical care, and delays in access to the latest drugs for cancer and other serious diseases.”

PhRMA also donated $150,000 last year to the American Action Forum (AAF), a policy group affiliated with AAN that has routinely cast doubt on Medicare for All. AAF has characterized the plan as “a political bait and switch” and recently questioned “whether M4A is politically viable at all.”

In April, PPI issued a report arguing that “activists are trying to force Democrats to embrace ‘Medicare-for-all’ as a magic pill for all that ails our health care system.” PPI recommended that progressives “push instead for less disruptive and costly ways to align incentives to spur innovation and improve health care delivery in both the private and public sectors.”

Trump, who spoke favorably about single-payer, universal health care systems for years, is now campaigning against Medicare for All. "Every major Democrat in Washington has backed a massive government health care takeover that would totally obliterate Medicare," he said in a speech last month.

The Trump campaign has used a variety of health industry talking points to raise doubts about Medicare for All. Last month, his campaign’s rapid response team wrote in an email: “While the Democrats are debating Medicare for All and a ‘public option,’ only one fact matters: all of these proposals will kill private health insurance plans.”

In his 2000 book, The America We Deserve, Trump spelled out a number of problems with the nation’s health care system, including employer-based health insurance.

“As things stand now, most people rely on their employers for health care coverage,” he wrote. “They are obviously thankful for those health benefits, but there are problems with this approach.”

“Employers own the policies provided and determine what the benefits are, and usually it's a one-size-fits-all situation,” Trump explained. “The people actually covered by the policies have little if any input in how the policy is structured. In this age of managed care, that puts an enormous segment of our population at the mercy of a large and increasingly impersonal health industry -- one that too often puts the bottom line first, and curing you and your family second.”

This story was produced in partnership between the American Prospect and MapLight.