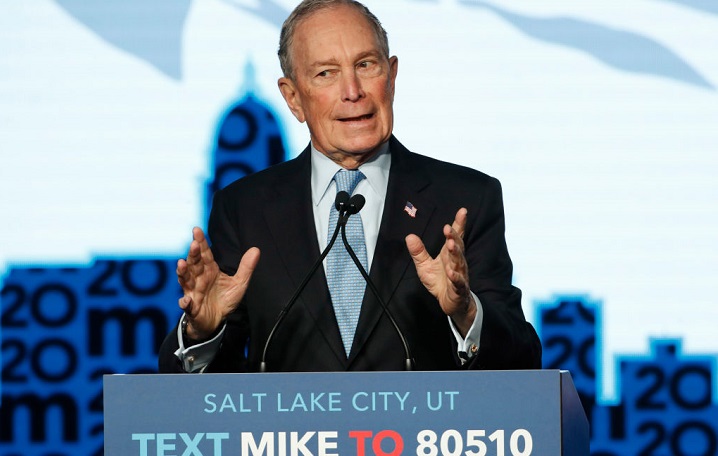 Since the beginning of the year, Bloomberg has spent at least $55.7 million on Facebook ads, according to the company -- more than the total amount purchased by the two other billionaires in the race, President Donald Trump and hedge fund manager Tom Steyer. Trump has spent $25.5 million; Steyer has dropped $23.7 million.

Bloomberg’s ad blitz on Facebook comes amidst a larger national discussion about the role of social media and technology companies when it comes to political advertising.  Gaps in disclosure requirements mean online political ads are not subject to the same transparency requirements as ads in traditional media, while the ability for campaigns to “microtarget” ads to narrow groups or even individuals based on their interests and demographics makes it nearly impossible to track and fact-check political messaging online. Following its decision not to fact-check content posted by politicians, whether paid or organic, Facebook has taken significant criticism from advocates pushing for more transparency when it comes to online political advertising.

The results of Bloomberg’s spending spree won’t be measurable until March 3, when the former mayor enters his first contests, the “Super Tuesday” primaries. The contests in 14 U.S. states and American Samoa will determine the distribution of 1,357 delegates -- more than one-third of the total 3,979 delegates awarded.

So far, however, the social media profligacy has done little for the Bloomberg campaign. A KQED/NPR poll found he had the support of 6 percent of likely Super Tuesday voters in California, trailing a quartet of Democratic candidates. An Economist/YouGov poll of 1,500 adults last week found Bloomberg was viewed unfavorably by 58 percent. A CBS News poll released earlier this week found Bloomberg and U.S. Sen. Amy Klobuchar of Minnesota were the only Democratic candidates who would lose to Trump in an election.

Sen. Bernie Sanders, a Vermont independent who’s leading the Democratic presidential field, has spent $10.2 million on Facebook ads since Jan. 1. Former South Bend, Ind., Mayor Pete Buttigieg, who finished in a virtual tie in the chaotic Iowa caucuses with Sanders, has spent almost $8.3 million on the social media giant. Sen. Elizabeth Warren, a Massachusetts Democrat, has spent $7.8 million while leading the charge to break up enormous tech companies like Facebook.

Former Vice President Joe Biden, who has an 18-point lead over his nearest competition in this Saturday’s South Carolina primary, has spent $4.2 million on Facebook advertising. Klobuchar has spent about $2.7 million, according to Facebook records.

Facebook isn’t the only medium where Bloomberg is spending heavily. Advertising Analytics, an Alexandria, Va..-based advertisement tracking firm, estimated last week that Bloomberg had spent another $401 million on television and radio pitches. The former mayor and founder of an eponymous financial services firm has said he’d spend as much as $1 billion of his own fortune to defeat Trump.