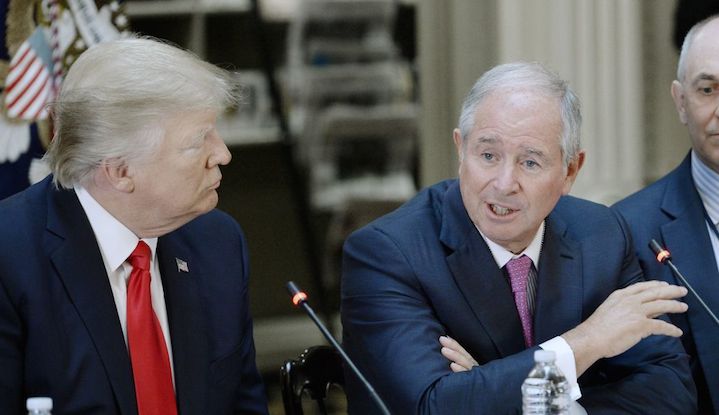 When San Francisco’s local government endorsed a state ballot initiative to permit rent control measures earlier this month, it appeared to be a victory for housing rights advocates in a city where stratospheric prices have sown social unrest and class animosity. The measure has found similar support from other California cities and unions representing public employees who can’t afford to live in cities where they work.

Those advocates, however, may be unwittingly financing the opposition to the rent control measure. Documents reviewed by Capital & Main and MapLight reveal that a private equity giant with ties to President Donald Trump has boosted the campaign to defeat Proposition 10 with money taken from real estate investments funded by California public employees and the state university system.

Campaign finance records show entities controlled by private equity giant Blackstone have been among the biggest sources of cash for opponents of the ballot measure. More than $5.6 million has come from a Blackstone holding company and four of its investment funds.

But unlike typical corporate political donations, the Blackstone contributions didn’t come from the firm’s executives or its corporate treasury. Instead, they came from pools of capital from investors, which include dozens of state and local pension systems, as well as public university endowments. The move has been described as the equivalent of mutual fund executives taking money out of customers’ accounts to make political contributions.

In effect, Blackstone’s maneuver means the opposition to the rent control initiative is being bankrolled by everyone from San Francisco municipal workers to university employees to public school teachers -- all of whose retirement savings are in the Blackstone funds that have been tapped for the Proposition 10 fight.

"What we have is the largest Wall Street landlords in the country who are the very people profiting off of the housing crisis leading the opposition to Proposition 10," said Amy Schur, the campaign director for the Alliance of Californians for Community Empowerment, which supports the ballot measure. "It's adding insult to injury that they're using the pension funds' dollars of hard-working families to beat back an essential policy to provide relief to working families."

Michael Bustamante, a spokesman for a committee opposing Proposition 10, didn’t answer questions about Blackstone’s contributions. He said the measure is a “bad public policy that will make it harder for those looking for a safe, affordable place to live and is a perfect example of a well-intentioned law with disastrous consequences.”

“Can’t Afford A Place To Live”

The rent control initiative was prompted by anger over California’s housing costs. The median home price in the state  has topped $600,000, double the national median. Californians pay some of the highest rents in the nation, and retirees have been hit hard.

A coalition of community organizations, tenants rights groups and unions have lined up behind Proposition 10, which would repeal a 1995 state law that blocks municipalities from imposing rent controls on new apartment units or single-family homes.

“In my district, teachers, firefighters and nurses often can’t afford a place to live,” said U.S. Rep. Ro Khanna, D-Calif. “Cities should have the right to provide apartments at affordable rents. Any effort to kill Proposition 10 hurts not just the working class but also undermines the ability of local communities to determine their own destiny.”

Opponents of Proposition 10 have cited an analysis from state legislative auditors that said the measure would likely reduce state and local revenues in the long term. The auditors estimated that revenue losses could be “in the hundreds of millions of dollars per year.” Critics have also argued that reduced profitability would deter developers from building more housing.

“There is no doubt we need to make housing more affordable for Californians, but Proposition 10 will make our current situation worse, not better, by constricting future development of affordable units,” former Los Angeles Mayor Antonio Villaraigosa said last month.

“The Investors Would Have No Idea”

More than $60 million has been donated for the Proposition 10 fight, with most of the money coming from landlords opposed to the measure. Blackstone and its affiliates have donated more than $6.8 million to two organizations opposing the initiative.

Almost $1.3 million has come from Invitation Homes, a Blackstone subsidiary that bought foreclosed single-family homes in the wake of the 2008 financial crisis and converted them to rental properties. Invitation now owns about 13,000 rental homes in California. Invitation tenants have complained of toxic mold, leaks and black widow spider infestations, and some have alleged they’re victims of excessive and illegal late payment fees. 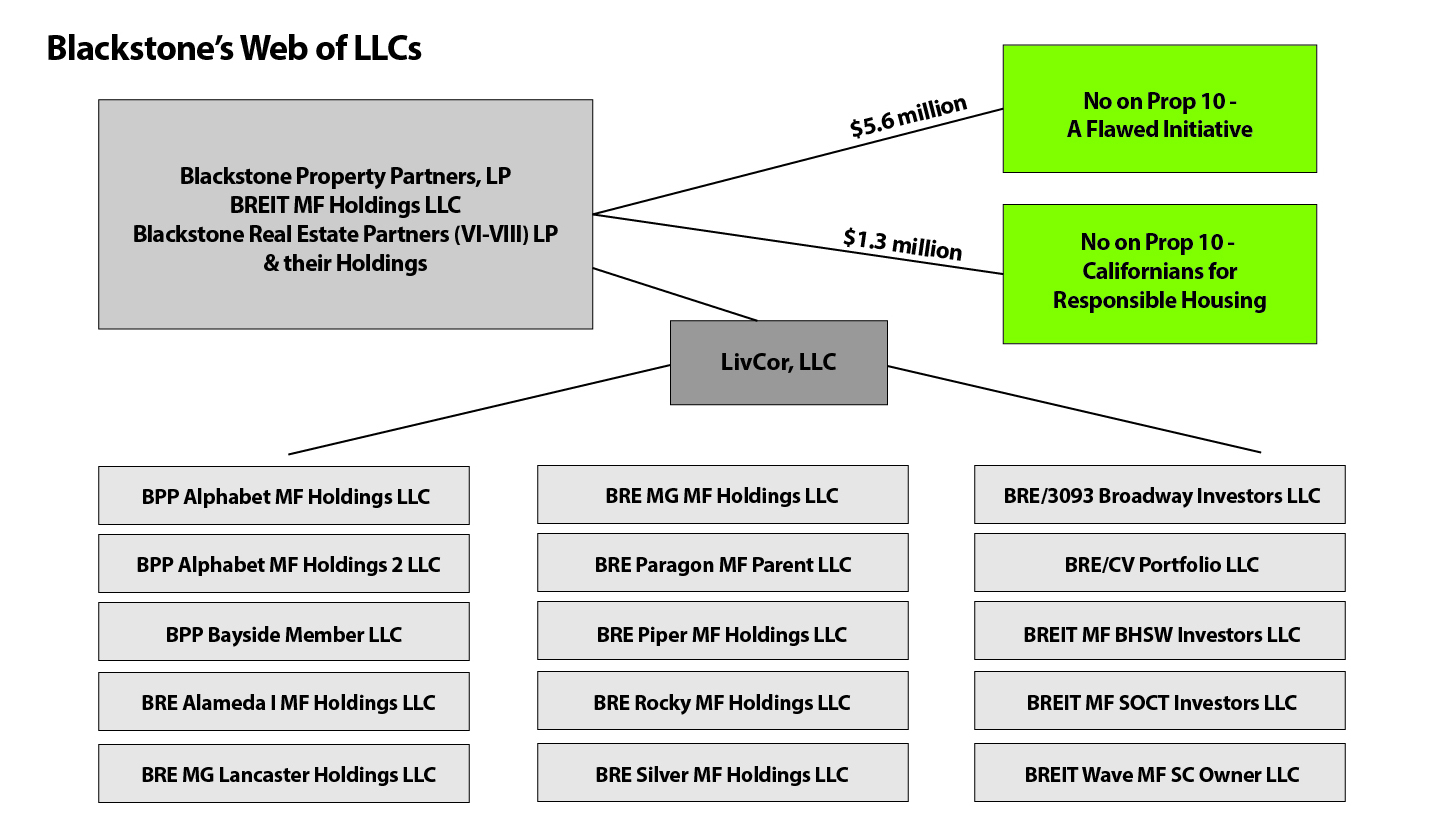 Blackstone has used a complex network of LLCs to funnel $5.6 million from investor funds into an effort to defeat Proposition 10, California's affordable housing initiative on the November ballot.

Real estate funds typically pool institutional investors’ cash, use it to buy properties, and return profits from rents and asset sales to the investors. The agreements governing public pension investments -- which are usually exempted from open records laws -- typically give Wall Street managers wide discretion over investor money. Blackstone appears to be using that latitude to direct investors cash into an election battle.

“Private equity fund investors -- pension funds, endowments and others -- are limited partners, and these private equity funds are in effect ‘blind pools’ which afford investors with very proscribed legal rights and with surprisingly little insight into and information about the funds’ investments,” said Leo Hindery, a New York-based private equity executive. “The investors would have no idea, if some of their money is going into partisan or activist political campaigns.”

Blackstone has warned investors they could face losses from “fluctuations in occupancy, rental rates, operating income and expenses” as well as from “changes in legal, fiscal and regulatory regimes,” corporate documents show.

Eileen Appelbaum, co-director of the Washington, D.C.-based Center for Economic and Policy Research, said the donations are likely legal, but she argued that pension managers should steer clear of private equity firms that use retirees’ money for political causes.

“It would be bad enough if Stephen Schwarzman and [executive vice chairman] Tony James of Blackstone were spending some of their own billions to oppose legislation that will put a brake on their ability to drive sky-high rents even higher in the Bay Area,” Appelbaum said. “But it is unconscionable for them to use millions of dollars taken from properties in which they have invested the retirement savings of police, firefighters, teachers and other public employees to deprive these workers of affordable rents in the communities in which they work.”

“There Can Be Some Tension”

Alex Caputo-Pearl, president of United Teachers Los Angeles, said last month that teachers spend as much as half of their salaries on rent. “We need to say enough is enough and implement measures that better protect students, teachers and families. Implementing rent control is a strong first step,” he said.

Even so, some of the retirement money those teachers contribute monthly to the California State Teachers' Retirement System (CalSTRS) is invested in the Blackstone funds that are financing the campaign against Proposition 10. Those investments were valued at more than $715 million last year, according to the CalSTRS website.

“As a public entity, CalSTRS does not participate directly in electoral politics,” said a CalSTRS spokesperson.

Similarly, San Francisco’s board of supervisors last month voted to endorse Proposition 10. But in 2015, the city employees’ pension system committed $150 million to a Blackstone fund that has donated to the measure’s opponents.

At the same time, though, the UC Retirement Plan, which provides benefits for university employees, has invested $35 million in the Blackstone funds used to finance the Proposition 10 opposition.

“The University of California does not make donations to political campaigns,” said UC spokesperson Dianne Klein. She added that the UC system’s Blackstone investments only include a small amount of California real estate. 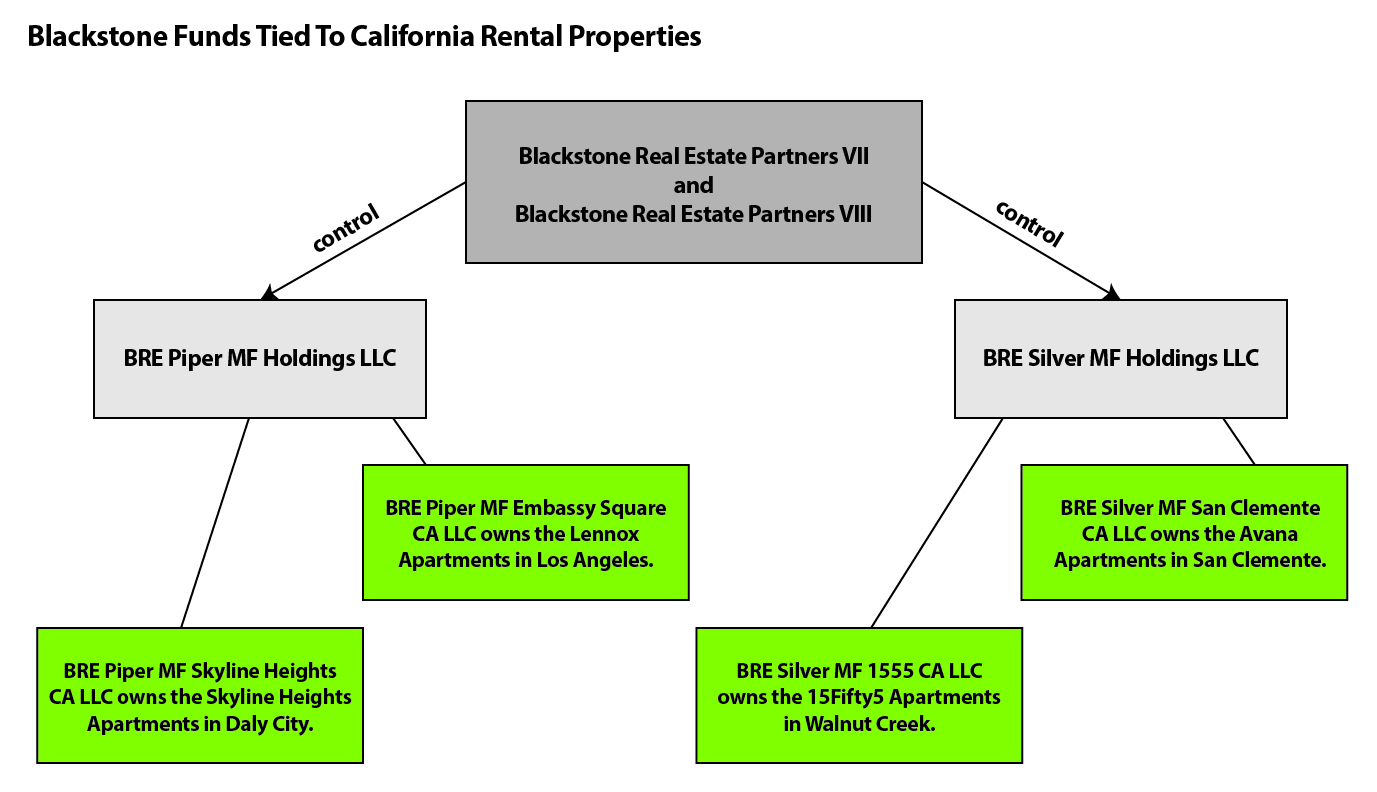 Blackstone's investment funds are tied to apartment complexes in California.

Lou Barberini, a former San Francisco police officer whose retirement system has invested in the Blackstone funds, said his fellow retirees should be concerned that Blackstone’s move will set a precedent that allows Wall Street firms to use pension money for pet political causes.

“It is morally wrong that they are using our retirement money to fund a political campaign,” Barberini said. “It is also a slippery slope. Where does this stop? What if a money manager wants to take our retirement savings and give it to a candidate?

“Once you start taking money out of pensions to fund political campaigns, where do you draw the line?”

This story was reported by David Sirota of Capital & Main and Andrew Perez of MapLight and published in partnership with The Guardian. Amari Cowan contributed reporting.

MapLight and Capital & Main’s funders include some non-profit groups that have declared their support for Proposition 10. Neither organization has received any funding from any for-profit entities that have a commercial interest in the outcome of the ballot measure.