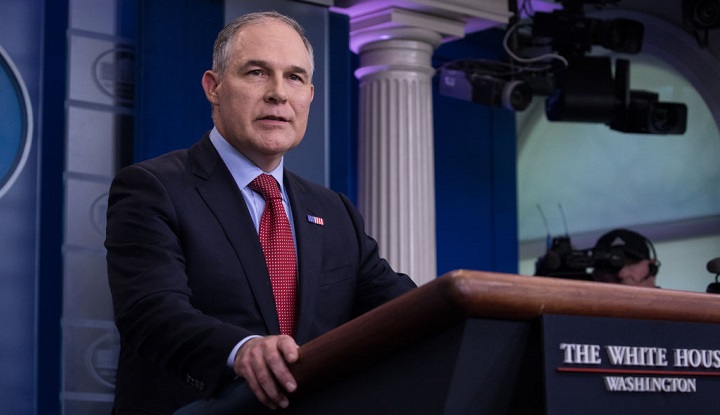 This story was published in partnership with Fast Company.

An organization once led by the nation’s top environmental regulator raised more than $750,000 from conservative dark money groups to battle federal regulators, including officials at the agency he now leads, a MapLight investigation has found.

Scott Pruitt, the head of the Environmental Protection Agency, was previously the chairman of the Rule of Law Defense Fund (RLDF), an organization created by Republican attorneys general in 2014. The shadowy organization is at the center of a web of dark money nonprofits that have worked to advance conservative interests, and has helped organize state challenges to environmental regulations that could hurt polluters financially.

Pruitt, who was Oklahoma attorney general until he was appointed to his current position by President Trump, refused during his confirmation hearing to divulge the names of donors or other sources of funding for the RLDF. Nonprofits like the RLDF aren’t required to disclose their donors to the public, making it impossible to identify all people and organizations funding its efforts. However, a MapLight review of nonprofit tax records provides the most thorough accounting of the fund’s donors to date.

At least 40 percent of RLDF’s funding in 2014-15 came from dark money organizations like the Judicial Crisis Network, the Rule of Law Project and Freedom Partners Chamber of Commerce -- which has been described as a “secret bank” for Charles and David Koch, the billionaire libertarian brothers who own the energy behemoth Koch Industries

While some companies linked to RLDF have disclosed lobbying the EPA in recent months, the agency has insisted that Pruitt doesn’t need to recuse himself from participating in any matters unless the RLDF is directly involved.

Angered by Pruitt’s lack of candor throughout his confirmation process, Democratic congressmen have introduced legislation that would force presidential appointees to disclose contributions they raised for political groups or nonprofits that have fought for changes to regulations administered by the appointees’ agencies.

EPA, the RLDF and the fund’s donors did not respond to MapLight’s requests for comment.

Established in 2014 by the Republican Attorneys General Association (RAGA), RLDF describes itself as “a forum for Republican attorneys general to study, discuss, and engage on important policy affecting the states and their citizens.” Pruitt served on the RLDF board from 2014 until December. He was chairman of the organization from November 2015 until last November.

Much of RLDF’s work resembles the “Rule of Law” campaign Pruitt began as president of RAGA. As part of the campaign, state attorney generals challenged Obama administration policies on the environment, health care, immigration and the financial industry.

The RLDF has helped organize similar legal challenges from state attorneys general. In its news section, the group touts challenges to the EPA’s Clean Power Plan, which limits greenhouse gas emissions from power plants, and an Obama-era rule that would make 4 million American workers eligible for overtime pay.

The New York Times reported in 2014 that one of Pruitt’s federal challenges was influenced by Devon Energy, an Oklahoma oil and gas company. A letter that Pruitt sent in 2011 to the EPA, arguing that regulators were overestimating the amount of methane emissions generated by natural gas production, was actually written by lawyers for Devon Energy; Pruitt’s staff only made minor changes before signing his name to it. Devon Energy also donated $125,000 to RAGA in 2014. Its political action committee gave $10,000 to Pruitt’s campaigns for attorney general.

Pruitt sent another letter in April 2014 to the EPA’s inspector general that expressed displeasure with the agency’s plan to review federal and state regulations on hydraulic fracturing to assess its impact on water supplies. One month later, RLDF requested signatures from other Republican attorneys general on a multi-state version of Pruitt’s fracking letter, emails obtained by MapLight through a Utah public records request show.

The fracking letter interested Devon Energy. Allen Wright, the company’s vice president for government affairs, contacted a top Pruitt aide for a copy of the letter, according to emails published by the Center for Media and Democracy. "Good to see you this week,” Wright wrote. “Can you send me a copy of Scott's letter regarding the EPA [inspector general’s] inquiry into state regulation of O&G?”

The emails reviewed by MapLight shed light on the fund’s policy gatherings.

The fund passed along a July 2015 message from Pruitt inviting other attorneys general to “a small, private event to discuss religious liberties matters in light of recent [Supreme Court] rulings.” Pruitt wrote that the Oklahoma City event would “bring together a select group of attorneys general and other leaders in the legal and theological fields.”

Last year, RLDF sponsored a senior staff retreat in Salt Lake City, Utah, featuring Republican attorneys general and lawyers for the energy industry. An agenda for the event shows Pruitt was scheduled to participate in a panel on “The Future of the Fight to Stop the Clean Power Plan.” Sharing the stage with Pruitt was West Virginia Solicitor General Elbert Lin. A few months later, Pruitt signed onto Lin’s challenge to the rule before a U.S. appeals court.

In March, Trump signed an executive order ordering the EPA to rewrite the Clean Power Plan. Pruitt announced the EPA would review the rule, and his agency asked the appeals court to delay its ruling on it. The court agreed to that request in April.

Pressed by Democrats about his pledge to recuse himself from any active cases he was involved in as attorney general, Pruitt said in early May that he will not participate in the Clean Power Plan appeals court case -- although the EPA reportedly has already drafted language to repeal the rule.

Because of RLDF’s status as a 501(c)(4) nonprofit, it’s impossible to document all of the group’s donors. But tax records show hundreds of thousands in donations can be traced to the Judicial Crisis Network (JCN), a conservative legal group.

The network has financed nonprofits boosting Republicans in state judicial and attorneys general races, and advocates for the appointment of conservative judges. The group recently spent more than $10 million on television ads to ensure Supreme Court Justice Neil Gorsuch’s confirmation. The network reported donating $435,000 to RLDF between July 2014 and June 2015.

Leonard Leo, a top official at the conservative lawyers’ organization known as the Federalist Society, is listed in RLP’s filings as a director. Pruitt has been a frequent participant in Federalist Society events, and was a featured speaker at a Washington, D.C., luncheon in March. Leo was reportedly “instrumental” in starting both JCN and the Wellspring Committee, a dark money group that funneled $13.9 million to JCN between 2013 and 2015.

There is only one publicly disclosed donor to Wellspring, which is closely tied to JCN -- Wellspring’s president is married to JCN’s treasurer. Tax records show Wellspring gave RLP $40,000 in 2014 and 2015, and also donated $310,000 to the Federalist Society.

Freedom Partners Chamber of Commerce gave $175,000 to RLDF in 2014 -- a connection that was highlighted by Democrats during Pruitt’s confirmation process. The dark money group has been linked to the Koch brothers. Freedom Partners has helped fund dozens of conservative advocacy organizations.

Pruitt’s own campaign finance filings reveal a heavy reliance on energy companies. A MapLight review found that his campaigns received $353,000 in donations from members of the energy and natural resources sector since 2001, according to data from the National Institute of Money in State Politics.

A super PAC tied to Pruitt, called Liberty 2.0, received almost half of its funds from the energy industry, Oklahoma Watch has reported. The industry accounted for 27 percent of the money raised by Oklahoma Strong Leadership, a Pruitt-affiliated PAC. 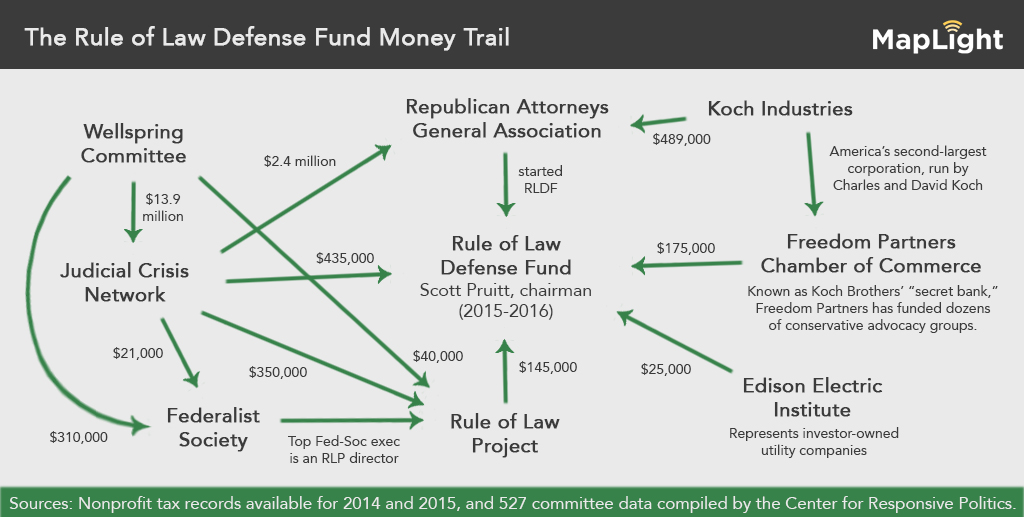 As part of the ethics agreement Pruitt signed in January, he pledged that he would “not participate personally and substantially in any particular matter involving” RLDF without seeking authorization to do so.

When Democrats asked the EPA how it will ensure Pruitt doesn't participate in any matters involving secret donors to RLDF, agency lawyers said the fund would have to be directly involved in an issue before the EPA for Pruitt to have any potential conflict.

In Pruitt's confirmation hearing before the Senate Environment and Public Works Committee, Sen. Sheldon Whitehouse, D-R.I., asked him if he had solicited any donations to RLDF that could pose undisclosed conflicts of interest in his role at the EPA.

Pruitt said that RLDF “would need to be a party in the future for that to be an issue,” citing the letter from EPA lawyers. “At the time, if issues arise in the future, I will seek the counsel of EPA ethics and follow the advice of those career folks to make a decision and recuse if necessary,” he said. “That is something I commit to doing.”

In the first three months of 2017, Koch Industries reported lobbying Congress and the EPA on “issues related to motor vehicle fuel, including climate changes” and “renewable fuels standards.” The EPA's Renewable Fuel Standard program mandates that gasoline be blended with biofuels like ethanol.

Edison Electric Institute lobbied the EPA and Congress on a number of environmental issues, including a law passed last year that allows states to set up permitting programs for disposing of ash produced by coal-burning power plants. While the programs currently require EPA approval, Pruitt announced in late April that the agency has started drafting plans to allow states to create their own standards for coal ash disposal.

Pruitt resigned from RLDF on Dec. 8, the day Trump nominated him to lead the EPA. One week later, emails show the fund had begun collecting signatures for a letter urging senators to confirm his nomination.

Two dozen Republican attorneys general eventually signed the letter, which was sent to the Senate Environment and Public Works Committee in early January. The letter made its way into an op-ed written by Sen. John Barrasso, R-Wyo., backing Pruitt.

“Attorneys general from 24 states authored a letter in support of his nomination,” Barrasso wrote. “They know he can and will rein in Washington.”