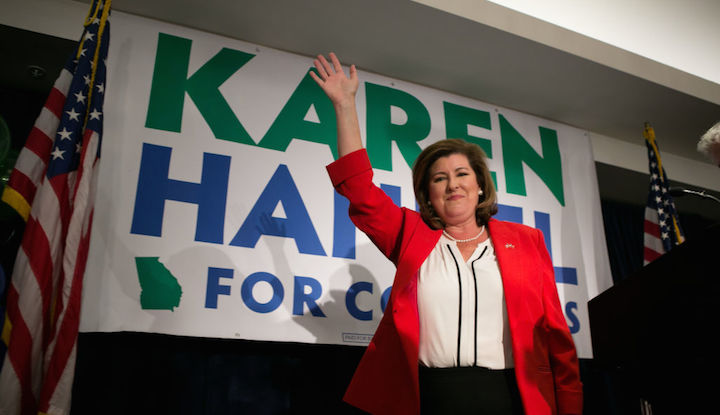 Karen Handel, who won the special election for Georgia's 6th Congressional district, was boosted by the Congressional Leadership Fund and dark money from the American Action Network.
Photo by Jessica McGowan/Getty Images.

This story is a collaboration between MapLight and the International Business Times.

A secretive nonprofit closely linked to House Speaker Paul Ryan has begun playing a pivotal role in supporting Republican policies and candidates since the November 2016 election, a MapLight analysis has found.

The American Action Network (AAN) has donated more than $6.5 million to the Congressional Leadership Fund (CLF) -- a super PAC that has been the top-spending outside organization this year, pouring almost $10 million into GOP special election victories in Georgia and Montana. The AAN has been the super PAC’s largest donor, accounting for more than 60 percent of its funding since the 2016 election.

Meanwhile, the network has spent at least $5.6 million on ads to boost the American Health Care Act, a bill that would undo much of the 2010 Affordable Care Act, otherwise known as Obamacare, and cause as many as 14 million Americans to lose their health insurance coverage next year. AAN has also worked to promote corporate tax reform, another item high on the GOP’s legislative wish list.

Nonprofit “dark money” organizations like AAN aren’t required to publicly disclose their donors, making it nearly impossible to identify all individuals or organizations that have bankrolled the group in the past, or to determine whether AAN’s supporters stand to benefit from its current legislative advocacy efforts.

AAN did not respond to MapLight’s request for comment.

The network, which is headquartered in Washington, D.C., was created in 2010 by former Sen. Norm Coleman, R-Minn., and longtime GOP operative Fred Malek. Since its creation, AAN has spent at least $56 million on ads and donations to influence elections, making it one of the most active dark money organizations in the U.S. It’s also handed out at least $19 million to other conservative nonprofits.

The AAN has been closely affiliated with CLF. The organizations share the same board members, and AAN has described CLF as its “sister super PAC.”

The Boeing Company’s political action committee is the only publicly disclosed donor to AAN this year, according to a MapLight review. The PAC, which is funded by the Chicago-based plane maker’s employees, donated $250,000 to AAN in April and May, according to federal election records.

Boeing has lobbied Congress on both of AAN’s top legislative priorities, the American Health Care Act and corporate tax reform, lobbying records show. While President Donald Trump’s tax reform plan could be a boon for Boeing, the health care bill might not be as good for the company’s employees. If the House version of the legislation passes, employees could be forced to pick up a larger share of the costs of basic health care services.

Boeing did not respond to questions from MapLight about its donations.

Public records reveal sources for only $15 million of the $112 million that American Action Network reported raising from 2010 to June 2015, according to its most recently available tax returns.

The Pharmaceutical Research and Manufacturers of America (PhRMA), the drug industry’s primary trade association, gave $4.5 million to AAN in 2010, and another $1.5 million in 2012, according to its tax records. The organization has not endorsed or opposed the American Health Care Act.

Aetna, one of America’s largest health insurers, donated $3 million to AAN in 2011, according to a filing accidentally disclosed to insurance regulators. The company’s CEO, Mark Bertolini, said earlier this month that Aetna had “provided input about the American Health Care Act” to Republicans. Aetna has moved to withdraw entirely from the state exchanges created to sell individual health insurance plans under the 2010 health care law.