Despite Trump Opposition, NFL Owners Have Given 75 Cents of Every $1 Contribution to GOP 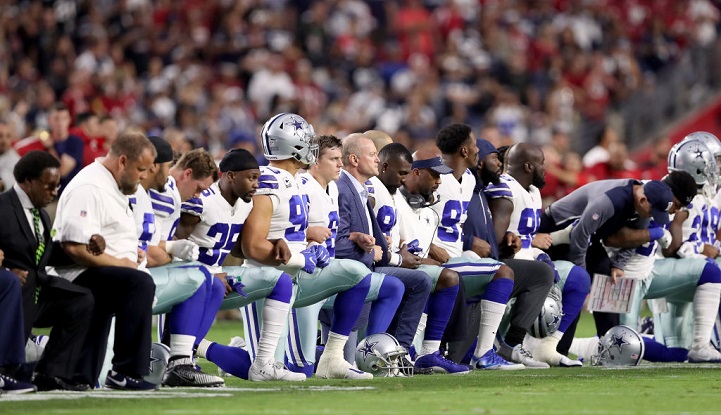 Members of the Dallas Cowboys kneel during the National Anthem before an NFL game on September 25, 2017 in Arizona.
Photo by Christian Petersen/Getty Images.

About 75 cents of every $1 in federal campaign contributions from NFL owners during the last decade has gone to Republican candidates, according to a MapLight analysis.

Three dozen majority and minority owners have given $1.5 million to GOP congressional and presidential campaign committees since 2008. Democratic politicians only received about $575,000 from NFL owners during the same period.

The difference highlights a major disparity between the NFL players and team owners. The players are a collection of predominantly young black men who have been kneeling during the pre-game national anthem to protest police shootings of unarmed black men. The team owners are predominantly older white men who are reportedly divided over the league’s response to criticism from President Donald Trump, a Republican.

The protests were launched during the 2016 season by former San Francisco 49ers quarterback Colin Kaepernick, who hasn’t been signed by any of the 32 NFL teams since he became a free agent. After similar protests by players occurred earlier this season, Trump said the football players were being disrespectful.

“Wouldn’t you love to see one of these NFL owners, when somebody disrespects our flag, to say, ‘Get that son of a bitch off the field right now. Out! He’s fired. He’s fired!’” Trump told supporters at an Alabama rally, sparking a feud with players that threatens to spill into a third weekend of football games.

The NFL has a history of bad blood with Trump, dating back to the days of the upstart U.S. Football League (USFL). Trump, the owner of the USFL’s New Jersey franchise, spearheaded a lawsuit against the NFL for monopolistic practices in hopes of forcing a merger. The future president and billionaire reality television show host won the USFL’s 1986 lawsuit, along with $3 in damages awarded by a jury. Trump attempted to get back into the sport in 2014 when the Buffalo Bills franchise was put up for sale, but a $1 billion bid fell short. An angry Trump tweeted later that year that the games “are so boring now that actually, I’m glad I didn’t get the Bills. Boring games, too many flags, too soft!”

Despite the criticism, at least seven NFL owners gave $1 million to Trump’s inaugural committee after his surprise election in November. Only two owners who made seven-figure contributions to Trump -- Stan Kroenke of the Los Angeles Rams, and Robert Kraft, the New England Patriots owner who’s described himself as a personal friend of the president -- have given more money to Democrats than Republicans during the last decade.

Indeed, nine of the 10 top donors, accounting for $1.5 million of the total $2.1 million given to campaign committees during the last decade, contributed most of their campaign dollars to Republicans.  (The analysis doesn’t include independent expenditure organizations or other campaign-related vehicles, such as inaugural committees). Jimmy Haslam, the owner of the Cleveland Browns franchise and brother of Tennessee Gov. Bill Haslam, a Republican, has given 97.3 percent of his $218,450 to GOP candidates. Robert McNair, the Houston Texans owner, gave all of his $260,700 to Republican candidates. The second most-generous political campaign donor, Stephen Ross -- the principal owner of the Miami Dolphins -- gave almost 60 percent of his $232,200 in total contributions to GOP politicians.

The three top GOP donors in the league have all released statements disagreeing with Trump. Haslam described the Republican president’s comments as “misguided, uninformed and divisive.” McNair called them “divisive and counterproductive.” Ross urged “civil discourse instead of condemnation and sound bites.”

MapLight analysis of contributions from NFL team owners to federal candidates’ principal campaign committees since 2008, based on data from the Federal Election Commission. Contributions were identified on the basis of the donor name, and refined, based on the donor employer or donor city. NFL owners may have made additional contributions that were not identified in this analysis.