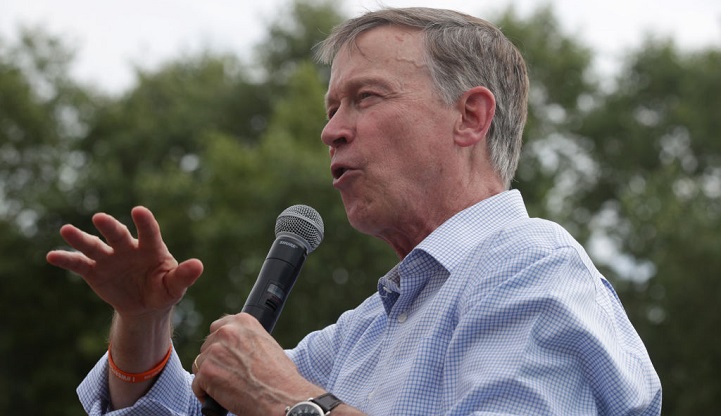 Fomer Governor of Colorado John Hickenlooper delivers a campaign speech in Des Moines, Iowa In August of 2019. Hickenlooper recently ended a campaign for President and is now running for U.S. Senate.
Photo by Alex Wong/Getty Images.

Although Hickenlooper has won two statewide races in Colorado, the moderate Democrat recently ended a lackluster campaign for president, where he failed to register in the polls as he railed against progressive policy priorities like Medicare for All and the Green New Deal. Just last year, Colorado Democrats won significant victories running to the left on health care and the environment.

“We met with multiple candidates and endorsed John Hickenlooper, a successful mayor and governor who won statewide twice, and is far and away in the strongest position to beat Cory Gardner next fall,” DSCC communications director Lauren Passalacqua told Sludge and MapLight.

Meanwhile, health-care and fossil fuel industry lobbyists raised almost $1.5 million for the DSCC during the first six months of the year, according to a review of campaign finance and lobbying records by Sludge and MapLight. The lobbyists’ clients include major health insurance and pharmaceutical companies whose profits are threatened by the prospect of a universal public health-care system, as well as oil and gas companies and utilities whose businesses depend upon Congress refusing to pass meaningful climate change mitigation measures.

While lobbyist fundraising only accounted for a fraction of the $28 million the DSCC raised in the first half of the year, it fits into a broader pattern of Democratic Party committees cozying up to corporate interests. In April, Sludge and MapLight reported that corporate lobbyists raising money for the House Democrats’ campaign arm had doubled their bundling from the previous election cycle.

The political action committee of Brownstein Hyatt Farber Schreck, a law and lobbying firm with offices in Washington, D.C. and Denver, has been the DSCC’s top corporate lobbyist bundler this year, raising $292,000 for the committee. Hickenlooper’s former chief of staff, Doug Friednash, leads the firm’s national political strategies group.

Brownstein Hyatt's clients include health insurance giant Anthem, electric utility Exelon, and a host of drugmakers, including Johnson & Johnson, AbbVie and Amgen. (On Monday, a judge ordered Johnson & Johnson to pay a fine of $572 million for fueling the opioid crisis in Oklahoma.)

The firm has also lobbied for Purdue Pharma, a company that has been blamed for the nation’s opioid crisis. Another client, Ardent Health Services, is a member of the Partnership for America’s Health Care Future, a dark money organization created by the health-care industry to defeat Medicare for All. Brownstein Hyatt is also a member of the Colorado Oil and Gas Association and has lobbied for at least a dozen oil and gas companies during the last decade.

Holland & Knight’s political action committee has raised $185,000 for the DSCC this year. The firm represents the Edison Electric Institute, a trade organization for electric utility companies, and coal giant Peabody Energy. It has also lobbied for the Florida Hospital Association and Blue Cross Blue Shield of Minnesota, which are state affiliates of organizations that oppose Medicare for All.

Michael Smith, a principal and director at Cornerstone Government Affairs, has bundled $172,000. According to Cornerstone’s website, Smith has been a member of the DSCC’s “Majority Trust Legacy Circle,” a special category of VIP donors, since 2008. He lobbies for oil company Citgo and recently registered to lobby for ExxonMobil.

The Akin Gump Strauss Hauer & Feld PAC raised $100,000 for the DSCC, while its senior policy advisor, Caryn Dyson, bundled $49,000 for the committee. Dyson lobbies for Gilead Sciences, a company that has drawn scrutiny from Congress for the increasing cost of its drug to treat HIV infection. She’s also lobbied for the Healthcare Leadership Council, a health-care industry trade organization that opposes Medicare for All.

Other clients of Akin Gump include Pharmaceutical Research and Manufacturers of America (PhRMA), a lobbying group for drugmakers that opposes Medicare for All, Merck & Co., ExxonMobil, and Chevron.

Jonathon Jones, a partner at Peck Madigan Jones, bundled $84,000 for the DSCC. Another lobbyist for the firm, Timothy Molino, raised $45,000. They both lobby for Anthem, the insurer, and PhRMA. Jones also lobbies for drug companies Merck, Amgen, and Celgene, as well as the Blue Cross Blue Shield Association and the National Association of Health Underwriters, which opposes Medicare for All.

Additional lobbyist bundlers for the DSCC include:

“Those who contribute do so to support a Democratic Senate and any speculation or insinuation otherwise is inaccurate,” said Passalacqua, the DSCC’s communications director.

Ryan, a former Citigroup lobbyist who previously worked for Senate Minority Leader Chuck Schumer, D-N.Y., told Sludge/MapLight that his firm holds an annual fundraiser for the DSCC. The donations he bundles grant him and other lobbyists access to politicians. The contributions "give people the opportunity to make their case with people who often don’t have a lot of free time,” he said.

Ryan said it was “hard to say” if any of his firm’s clients are opposed to Medicare for All or the Green New Deal, although two of his clients -- the Federation of American Hospitals and BIO -- are part of an expressly anti-Medicare for All coalition. Ryan said he’s never personally lobbied against either policy.

"I will support Hickenlooper,” he said. “My assumption is [the DSCC] goes based on polling and data on who has the best chance at winning. It’s an expensive state, and he's taking on an incumbent.”

Hickenlooper has long been an ally of the oil and gas industry. A former oil geologist, Hickenlooper oversaw a massive expansion of oil production as governor. He was also a cheerleader for natural gas development, a process that releases methane, a greenhouse gas that is far more harmful to climate change than carbon dioxide. Hickenlooper even drank hydraulic fracturing fluid in an attempt to prove the process is safe.

“John has a strong track record of expanding access to quality, affordable health care and combating climate change, and his plans to continue doing so are clear,” Hickenlooper spokesperson Jacque Montgomery said in an email.

There are 13 other contestants in the Colorado Democratic primary, including former Colorado House Speaker Andrew Romanoff, who is supporting Medicare for All and the Green New Deal.

“Let’s keep the @dscc OUT and the #GreenNewDeal & #MedicareForAll IN,” Romanoff tweeted on Tuesday. “I’m running to combat the climate crisis, secure health care for all, and build an economy that works for everyone. If that makes some party bosses & powerbrokers uncomfortable, so be it.”

This story is a collaboration between Sludge, an investigative news website focused on money in politics, and MapLight, a nonpartisan research organization that tracks money’s influence on politics.