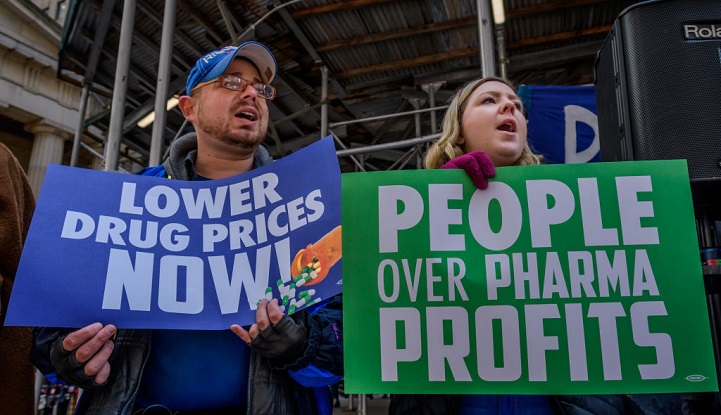 Protesters hold signs advocating for lower drug costs at a rally in New York City in November of 2019.
Photo by Erik McGregor/LightRocket via Getty Images.

A measure to lower drug prices narrowly passed the House in December, despite a near-even split of pharmaceutical industry money among Republican lawmakers, who almost unanimously opposed the bill, and Democrats, who unanimously supported it.

The bill, the Elijah Cummings Lower Drug Costs Now Act, which passed by a 230-192 vote, put a limit on out-of-pocket costs for people who obtain health insurance from Medicare, the federal program for the aged and disabled.  It would also create Medicare coverage for dental, hearing, and eye care.

Members of the Pharmaceutical Research Manufacturers Association (PhRMA), which opposed the bill, have given $4.6 million to Democratic lawmakers since 2017. During the same time, Republican legislators have received almost $4.5 million.  The bill was named for the late Rep. Elijah Cummings, a Maryland Democrat who led the House Government Oversight and Reform Committee until his death in October and who had conducted an investigation into drug prices.

The bill, sponsored by Rep. Frank Pallone, D-N.J., gained support as a significant number of Americans -- 1 in 4, according to one recent survey -- have had difficulty affording prescription medicine because of rising costs. Prices were hiked for more than 3,400 drugs during the first six months of 2019; the average price increase was five times the rate of inflation. The price of insulin, a life-saving drug for more than 30 million Americans with diabetes, has tripled since 2002.  Mylan, the Netherlands-based multinational that manufactures EpiPens used to treat life-threatening allergic reactions, raised its price from $100 per pen to $600 in only eight years. The company has paid almost a half-billion in fines to resolve claims that it overcharged the government and misled investors.

“The soaring price of prescription drugs is crushing Americans at the pharmacy counter, driving up health insurance premiums, and creating unaffordable costs for taxpayers who finance Medicare and Medicaid,” Speaker of the House Nancy Pelosi said.

Meanwhile, she noted, at least nine major pharmaceutical companies have used benefits from a 2017 Republican-passed corporate tax cut measure to purchase at least $50 billion of their own stock, boosting profits for wealthy investors and its own top executives.

The measure now goes to the Republican-controlled Senate, where it’s given little chance of passage and where pharmaceutical interests have given more to Republicans than Democrats. The industry has given Republicans almost $3.8 million since 2015; Democrats have reported receiving about $2.8 million. Although President Donald Trump claimed during his 2016 campaign that his administration would lower prescription drug prices by requiring the government to negotiate lower prices for medicine covered by Medicaid and Medicare, the White House has refused to back the measure.

Senate Majority Leader Mitch McConnell, a Kentucky Republican who’s received $313,000 in contributions from the pharmaceutical industry since 2015 – more than any other senator – warned the bill would impose “socialist price controls.” House Minority Leader Kevin McCarthy, who opposed the bill, has received $350,450 from the industry since 2017. The California Republican, the only lawmaker to receive more drug money than McConnell, said the bill was “opening the door to a government takeover of our prescription drug market.”

McConnell said the Senate is “looking at doing something on drug pricing.” A Senate bill that had gained bipartisan support was being considered by lawmakers. Sen. Chuck Grassley, an Iowa Republican who sponsored the Senate measure, has accused McConnell of torpedoing the bill.