Foreign Lobbyists Contributed More Than $4.5 Million to Candidates in 2016 Elections 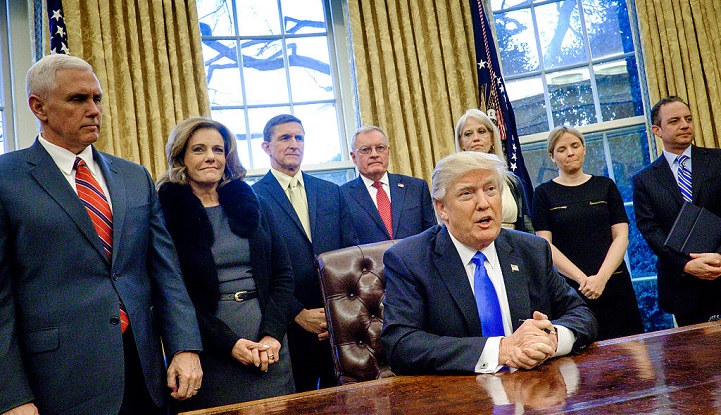 President Trump speaks to the media in January after signing an executive action instituting a lifetime ban on administration officials lobbying for a foreign country. The Trump orders also removed other lobbying restrictions in place under President Obama and a new MapLight/IBT analysis finds foreign lobbyists contributed more than $4.5 million to federal lawmakers and candidates during the last election.
Photo by Pete Marovich/UPI.

This story was reported in partnership by Andrew Perez  of MapLight and David Sirota and Jay Cassano of the International Business Times.

Since Donald Trump won the presidency, concerns about whether Russia played a hidden role in the 2016 election have simmered, and lawmakers have warned about the prospect of stealth foreign influence over American politics. But data compiled by International Business Times and MapLight show that foreign influence is hardly confined to the shadows. It’s a big, open, bipartisan business, with foreign government lobbyists delivering millions of dollars of campaign cash to elected officials in Washington.

In all, during the last election, those lobbyists gave more than $4.5 million to federal lawmakers and candidates. Foreign lobbyists and their firms’ political action committees were also responsible for packaging a total of $5.9 million in donations for candidates and party committees, through an influence-enhancing tactic known as “bundling.”

Because the donations come from foreign governments’ U.S.-based lobbyists, they effectively circumvent American laws designed to bar direct foreign donations. Under federal law, foreign nationals are prohibited from donating to any federal, state, or local campaigns, or political parties. But foreign governments frequently hire U.S. citizens to represent their interests, and those people face no such contribution ban.

“I worry about foreign influence on our political system,” Larry Noble, general counsel at the nonpartisan Campaign Legal Center, told IBT/MapLight. “One of the things that recent events are highlighting is the porous nature of a lot of our laws and a lack of enforcement.”

Noble, a former Federal Election Commission lawyer, said that donations by foreign lobbyists don’t often come from the lobbying firms or their PACs, but from individual members of the firm.

“When that happens, how do you know whether any of that money is being directed by lobbyists of the foreign national, or if it's coming out of money they got from the foreign national for that purpose? There are lots of ways for people to get illegal money to campaigns,” Noble said. “It’s not an easy thing to prove.”

Podesta -- whose firm represented at least a dozen foreign clients during the 2016 cycle -- was a major fundraiser for Democratic presidential nominee Hillary Clinton, the top 2016 recipient of money from foreign government lobbyists. Podesta said in an email that he has never been instructed by a foreign lobbying client to make donations to a U.S. campaign, and that he saw no ethical problem with foreign agents making political contributions.

The data compiled by IBT/MapLight represents campaign contributions from all donors registered under the Justice Department’s Foreign Registration Act (FARA). The figures, though, may only represent a portion of the total cash, since an unknown number of foreign agents never bother to register.

Though there are potential criminal penalties for violating the registration law, the department possesses limited enforcement measures. The Justice Department’s inspector general found last year that 62 percent of foreign lobbyists fail to register on time, and reported that the agency “lacks a comprehensive FARA enforcement strategy.” The Manafort case spotlighted the registration gap: Among the federal charges against him was one for failing to disclose his work for the Ukrainian government.

Passed by Congress in 1938, FARA imposes registration requirements on “foreign principals,” which are defined as a foreign government or political party, any foreign national, and any “partnership, association, corporation, organization, or other combination of persons organized under the laws of or having its principal place of business in a foreign country.”

Clients range from political parties, like the Democratic Party of Albania, to corporations, such as Azerbaijan's state-owned oil company and a Polish government-sponsored consortium of defense contractors.

Contracts reviewed by IBT/MapLight show that politically connected lobbyists can make huge sums from foreign government clients -- no matter how small, repressive, or impoverished the countries may be. Consider:

Few foreign governments wield as much influence in Washington as Saudi Arabia. The Gulf monarchy employed about 20 lobbying firms during 2016 cycle. Employees of four of those firms -- the Podesta Group, BGR Government Affairs, Brownstein Hyatt Farber Schreck, and the Glover Park Group -- gave more than $580,000 to federal candidates.

Saudi lobbyists have worked to maintain U.S. logistical support for the kingdom’s war in Yemen, which has caused thousands of civilian deaths and famine. Brownstein, for instance, recently circulated talking points about Saudi Arabia's "humanitarian efforts in Yemen."

While an increasing number of senators have criticized the Saudi offensive in Yemen -- and have called for the U.S. to stop arming the Saudi military -- the Pentagon has continued to supply weapons to the kingdom.

Lobbyists for the Saudis have questioned Iran’s compliance with the nuclear pact it brokered with the Obama administration, a deal that Trump recently moved to scrap. Schumer, the Senate minority leader, received at least $21,400 in donations linked to lobbying firms representing the Saudis from 2015-16, and was one of four Democratic votes against the 2015 deal.

The Turkish government has engaged four firms that were among 2016’s top foreign lobbyist donors -- Capitol Counsel, Mercury, Glover Park Group, and the Daschle Group. The firms made at least $285,000 in political donations during the 2016 elections. Turkey’s lobbying efforts have revolved around Fethullah Gulen, a U.S.-based cleric blamed by the government for a failed coup attempt last summer against its president, Recep Tayyip Erdogan.

Mueller has been investigating allegations that include Turkey’s hiring of Gen. Michael Flynn, Trump’s former national security adviser, as part of a plot to kidnap Gulen and return him to Turkey. Flynn may have violated the law by failing to register under FARA or disclose his client’s link to Turkey, according to the House Oversight and Government Reform Committee. He pleaded guilty last week to lying to the FBI about his conversations with Russia’s ambassador to the U.S. Other lobbyists hired by Turkey have sought to persuade state politicians in Texas and Michigan to investigate a network of charter schools affiliated with Gulen.

Contributions data consists of contributions to federal candidate campaign committees from Jan. 1, 2015, to Dec. 31, 2016, based on data from the FEC as of July 31, 2017. Contributions were matched with short-form registration records for active or recently terminated (since Jan.1, 2015) lobbyists from the U.S. Department of Justice as of July 14, 2017, by lobbyist name. Identifying contributions by contributor name may not capture all relevant contributions and may include false positives. Contribution bundling data is based on FEC filings as of Oct. 31, 2017.