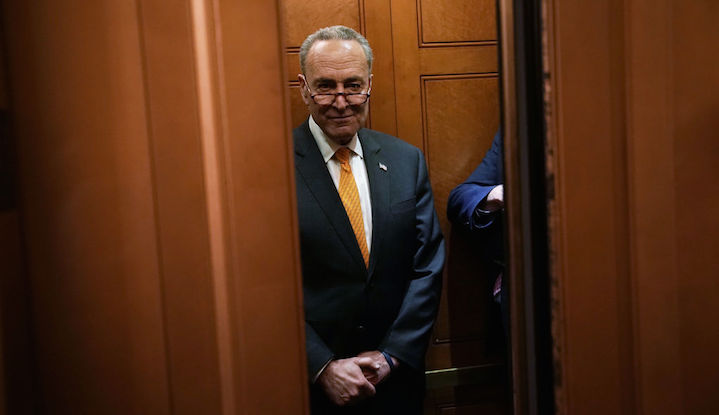 A former Goldman Sachs lobbyist who now works as the top lawyer for Senate Minority Leader Chuck Schumer, D-N.Y., declined to name 19 of his 20 former clients in his financial disclosure last year.

Mark Patterson, who also served as Treasury Secretary Tim Geithner’s chief of staff during the Obama administration, joined Schumer’s office last year. He had been a co-chair of the Perkins Coie law firm’s public and strategic affairs practice since 2014.

An archived version of Perkins Coie’s website says that Patterson provided “policy analysis and strategic counsel to clients such as major corporations, financial institutions and nonprofit organizations.” He gave few specifics in his 2018 financial disclosure, asserting he had to withhold the identities of nearly all of his clients based on rules of professional conduct for lawyers.

A Schumer spokesperson did not respond to questions.

At Schumer’s office, Patterson is now at the center of a fight over corporate governance. Since President Donald Trump took office, organizations like Demand Progress and the Revolving Door Project have pressured Schumer to use the limited powers at his disposal to encourage stricter oversight by recommending progressive watchdogs to regulatory agency boards. (Schumer, as minority leader, selects appointees for Democratic seats on regulatory bodies, who then need to be formally nominated by the White House.)

The effort has produced mixed results: Although Schumer last year proposed nominees that progressives support, the White House didn’t nominate two of them, and Republicans didn’t hold votes on the other two nominees.

A coalition of 20 organizations recently wrote to Schumer demanding he work to fill Democratic vacancies at the Securities and Exchange Commission, the Federal Deposit Insurance Corporation, the Equal Employment Opportunity Commission and the Merit Systems Protection Board. The letter faulted Schumer for allowing Trump judicial nominees to win confirmation by unanimous consent. Schumer could have used those vacancies as leverage to force votes on his party’s regulatory nominees, the progressives argued.

HuffPost this week called the fight over the regulatory bodies a “moment of truth” for Schumer and Senate Democrats. Jeff Hauser, who leads the Revolving Door Project in Washington, D.C., believes Patterson deserves some blame for the botched vacancies. After Patterson was hired, Schumer’s office told The Nation that the former Goldman lobbyist -- unlike his predecessor -- wouldn’t be involved in vetting appointments to federal commissions. That’s a problem, said Hauser.

“I think we should in general try to not hire people for senior jobs where they’re going to be recused from certain matters,” Hauser said. “It would make sense that your chief counsel would be involved in the SEC and FDIC hiring process. It’s something you want your chief counsel to be involved in. If he is complying with his recusal, that might explain the relative indifference, because the senior person on leadership staff who should be raising alarms that these nominations are languishing with Trump is disempowered.”

Hauser said Patterson’s financial disclosure “illustrates a lot of the weakness in our ethics rules, because there is insufficient skepticism about self-reported matters.”

“We only have his word that those 19 clients required that level of confidentiality,” Hauser said. “If he’s hiding his clients, it’s hard to even know what we don’t want him involved in, by definition, because he’s preventing us the ability to know what is a conflict of interest.”

This story was produced by MapLight and published in partnership with The Intercept.