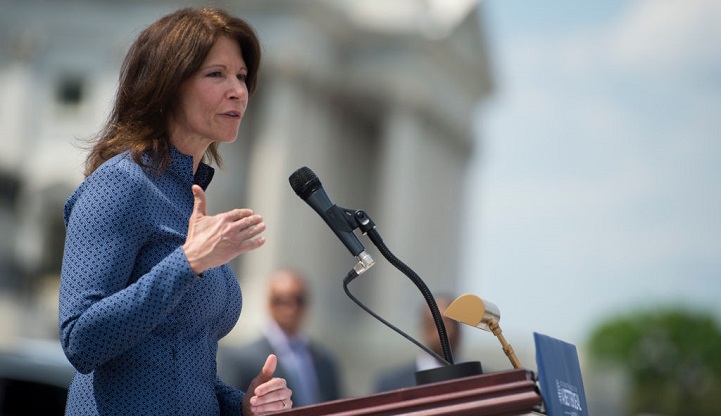 Rep. Cheri Bustos, D-IL, speaks outside the Capitol during a press conference in May of 2018. Bustos is one of 15 moderate House Democrats targeted for a 2020 primary by the progressive organization Roots Action.
Photo By Sarah Silbiger/CQ Roll Call.

Fifteen moderate House Democrats targeted for a 2020 primary by a progressive organization have at least two major advantages over challengers, according to a MapLight analysis. They’re likely to benefit from a new Democratic Congressional Campaign Committee policy that blacklists consultants and vendors who work for a primary challenger. The policy was implemented by Rep. Cheri Bustos, the DCCC chair and a target of Roots Action, the progressive organization.

Roots Action describes itself as “an online initiative dedicated to galvanizing people who are committed to economic fairness, equal rights for all, civil liberties, environmental protection -- and defunding endless wars.” The organization, which was officially launched in 2011 as the Action for a Progressive Future nonprofit, claims to have more than 1.5 million active members.

Although the elections are more than a year away, several of the incumbents targeted by Roots Action already have picked up primary challengers. Bustos will face off against progressive activist William Swisher. Cuellar, a south Texas congressman who’s received significant support from the private prison industry, is being challenged in a primary by Jessica Cisneros, an immigration lawyer.

Engel, the top Democrat on the House Foreign Affairs who was elected to Congress in 1988, has at least two Democrats running against him: Jamaal Bowman, a middle-school principal; and Andom Ghebreghiorgis, a special education teacher.

Hoyer, the House majority leader is being challenged by Briana Urbina, an attorney and special education teacher, and  Mckayla Wilkes, a 28-year-old student in the district that includes parts of suburban Washington, D.C. Lipinski has three primary challengers in his Illinois bid for re-election, including Rush Darwish, the owner of a small Chicago production company; Abe Matthew, a Chicago lawyer; and Marie Newman, who narrowly lost a 2018 primary contest to Lipinski.

Meeks will defend his Queens, N.Y., seat against Shaniyat Chowdhury, a bartender who worked for Rep. Alexandria Ocasio-Cortez’s insurgent campaign,  Schrader will run against Mark Gamba, a photographer and mayor of a suburban Portland city, to keep his Oregon congressional seat, and incumbent David Scott will face off against former Cobb County Democratic Party Chairman Michael Owens in Atlanta.

“It isn’t easy to defeat a Democratic incumbent in a primary,” the authors of “Bad Blues: Challenging Corporate Democrats,” a report from Roots Action, said. “Typically, the worse the Congress member, the more (corporate) funding they get … a grassroots primary campaign can put a scare into the Democratic incumbent to pay more attention to voters and less to big donors.”