Is Money in Politics to Blame for Complicated Tax Returns? 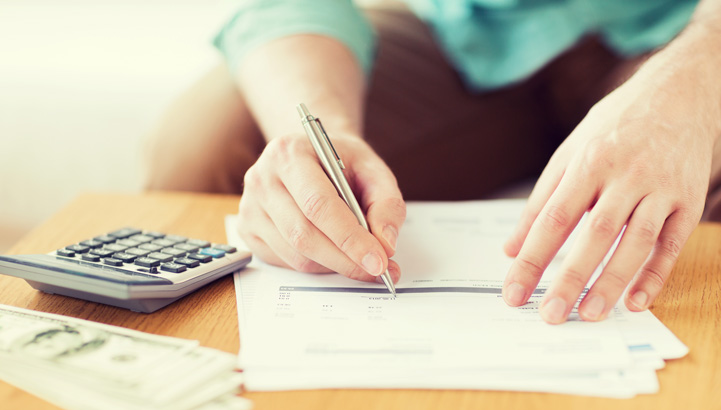 April 13, 2015 -- With two days left until tax day, most Americans have already spent several hours finalizing their 2014 tax returns. For years, Congress has been sitting on a proposal to make it easier for people to file their taxes. The proposed bill would implement a return-free filing system, where the IRS would provide taxpayers with a filled-out form containing all of their information and estimate their taxes. The taxpayer would just have to look it over before confirming the information. Other industrialized countries like Denmark and Spain, have already adopted a similar process. In the United States, though, a few powerful companies have a large financial stake in ensuring long, complicated tax returns continue to be the norm.

Congressional Stock Ownership: MapLight analyzed the 2013 personal financial disclosures of members of Congress to determine which members own stock in Intuit, H&R Block, and Jackson Hewitt. Data source: Office of the Clerk, U.S. House of Representatives and Office of the Secretary of the Senate, U.S. Senate.

Click allow images to see a detailed chart of campaign contributions from tax preparers to members of Congress.

In 2011, Rep. Jim Cooper (D-TN) introduced a bill that would have streamlined tax returns for most individuals. The so-called “return-free” filing bill never even came up for a vote in the House Ways and Means Committee, which has jurisdiction over the IRS. Sen. Ron Wyden (D-OR) and Sen. Dan Coats (R-IN) included the proposal in their failed 2011 tax reform bill. Rep. Cooper’s office said congressional inaction was due, in part, to opposition from tax preparation companies like Intuit and H&R Block.

Since Rep. Cooper’s 2011 bill to streamline individual tax returns died, the industry has increased its campaign contributions, and Congress has not considered any other return-free filing proposals.

Top Recipients of Campaign Contributions from the Tax Preparation Industry during the 2014 election cycle. 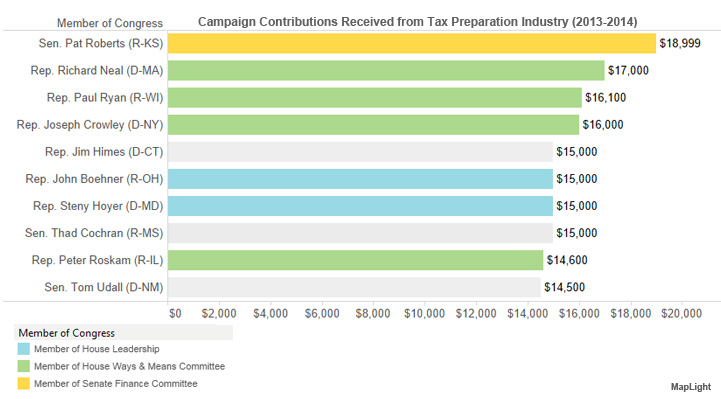 Background: Congress has failed to consider any other return-free filing proposals since Rep. Cooper’s bill died. Instead, members have introduced bills to prevent return-free filing from spreading. Rep. Zoe Lofgren (D-CA) and Rep. Eric Cantor (R-VA) introduced a bill in 2007 to limit the proposal. The bill died, and Rep. Cantor eventually left Congress. But Rep. Lofgren has continued to receive campaign contributions from the tax preparation industry including from Intuit, whose Mountain View, CA headquarters are not far from Rep. Lofgren's San Jose-based district. During the 2014 election cycle, Intuit was Rep. Lofgren's third highest campaign contributor.

Since failing to consider return-free filing, Congress has focused its attention on regulating fraudulent paid tax preparers, which the industry supports. In 2010, the IRS announced a plan to require paid tax preparers to receive certification before being allowed to charge a fee for filling out tax returns. Intuit and H&R Block supported the program. In February 2014, though, a federal appeals court struck down the IRS program, concluding the agency did not have the authority to regulate paid tax preparers.

Earlier this year, Sen. Wyden and Rep. Steve Cohen (D-TN) introduced bills that would authorize the IRS to certify paid tax preparers. Several states, including Oregon and California, already subject paid preparers to such a process. In 2012, 82 million Americans paid a professional to prepare their taxes. H&R Block is a strong supporter of this type of legislation, and even testified in support of a similar bill last year.

Lobbying Methodology: MapLight analysis of federal lobbying disclosure filings from the Clerk of the U.S. House of Representatives between January 1, 2008, and March 31, 2015. Lobbying totals represent money paid by an organization to each lobbying firm for services on all issues. Organizations report total lobbying expenses as a lump sum, which includes both in-house lobbying expenses and amounts paid to (and reported by) lobbying firms that they employ. MapLight calculates a given organization's in-house lobbying expenses by subtracting the total income reported by the lobbying firms that it employs from the company's total reported expenses. In general, filers may round their spending and expenses to the nearest $10,000, and we treat the designation of "Less than $5,000" as a value of $0. MapLight updates its lobbying database daily to capture amendments. Full reports are due on the 20th day of January, April, July, and October.

Personal Financial Disclosures Methodology: MapLight analysis of 2013 personal financial disclosures for members of the 113th Congress. Data source: Office of the Clerk, U.S. House of Representatives and Office of the Secretary of the Senate, U.S. Senate. Senate and House rules require the disclosure of assets belonging to the filers' spouses and/or dependent children, and these assets are included in the analysis. This analysis specifically investigates stocks and does not include other types of assets such as corporate bonds, notes, or bank deposits. This analysis was supplemented with data available from the Center for Responsive Politics at opensecrets.org.

Campaign Contributions Methodology: MapLight analysis of campaign contributions to all congressional candidates from the political action committees of the five companies and trade associations in the tax preparation industry from recently available FEC data from January 1, 2009 - December 31, 2014. Jackson Hewitt does not appear to operate a political action committee.