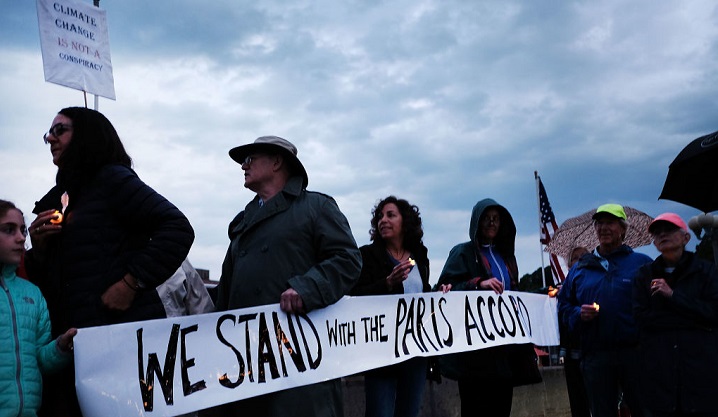 Environmental activists in Connecticut protest against President Trump's decision to withdraw the United States from the Paris climate accord in June of 2017,
Photo by Spencer Platt/Getty Images.

House members who opposed a measure to block the Trump administration from abandoning an international agreement to mitigate climate change received three times more money from the nation’s major oil and gas companies than the bill’s supporters.

The Climate Action Now Act, passed last week by the House in a 231-190 vote, would bar the U.S. from pulling out of the 2016 Paris Agreement, the landmark accord that seeks to limit global temperature increases tied to greenhouse gas emissions. President Donald Trump announced in June 2017 that the U.S. would withdraw from the agreement. The bill would require the Trump administration to submit an annual plan for complying with the agreement, including a 26 to 28 percent reduction from 2005 greenhouse gas emission levels.

Marathon Petroleum Corp. contributed $131,000 to lawmakers who didn’t support the bill, more than any of the top 10 U.S. companies. The Findlay, Ohio-based oil company, which publishes an annual report on the risks and opportunities presented by climate change, gave $16,750 to seven supporters of the legislation.

ExxonMobil, the world’s largest oil and gas company, gave $43,750 to 20 supporters of the climate bill, as well as $75,500 to 34 members who declined to support the measure. The Irving, Texas-based giant has vehemently denied reports that its scientists knew about the effects of greenhouse gas emissions for a half-century and took no action.

The House climate bill, sponsored by Rep. Kathy Castor, D-Fla., can now be considered by the Senate. Majority Leader Mitch McConnell, R-Ky., however, has promised “this futile gesture to handcuff the U.S. economy through the ill-fated Paris deal will go nowhere here in the Senate.”