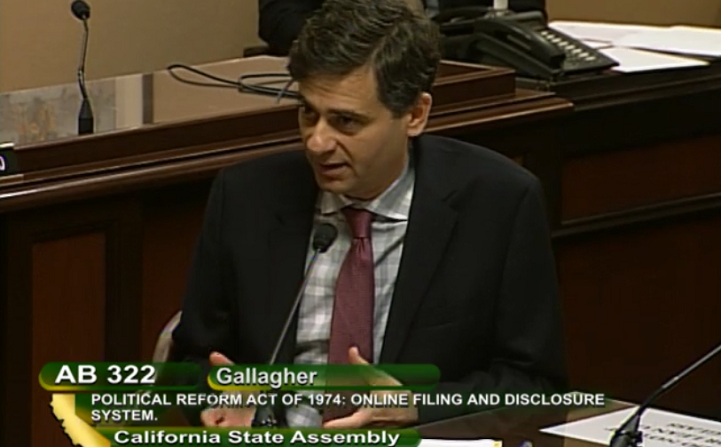 MapLight President and Co-Founder Daniel G. Newman testified in favor of  the bill in front of lawmakers in Sacramento on March 13, 2019. Following the testimony and statements from others in support, the bill passed out of committee unanimously, signaling broad bipartisan support for increased transparency around campaign finance records.

A copy of Newman's testimony is included below and a video is available here.

Chairman Berman, Vice Chair Gallagher, and honorable members of the Committee on Elections and Redistricting:

My name is Daniel G. Newman. I am the co-founder and president of MapLight, a nonprofit organization dedicated to advancing government transparency and accountability, and I am testifying today in favor of AB 322 -- which would help usher in an era of greater transparency for local governments across the state.

Local campaign finance reports outline who is contributing to local campaigns and how that money is spent. Current California law requires local government agencies to make these reports available to the public, but most local governments force people to review the reports in-person at a government building – rather than simply putting the information online where it can be accessed more easily. A 2016 report from the nonprofit group Common Cause found that 70 percent of all California cities require an in-person visit to a government office to view these campaign filings.

Across the state, Californians routinely use the internet to navigate their daily lives – from registering to vote, to depositing checks, to staying updated on the news.  But when it comes to accessing information about who is funding the politicians in their communities, people are denied reasonable access to this information that is central to our democracy. Refusing to put campaign filings online places an undue burden on working people, who can’t get to a city clerk’s office during business hours, and a burden on people without access to transportation.  It’s now trivially easy to post a document online, so making this change will be straightforward. Doing so will not only help voters make informed decisions, it will also increase public trust in government.

A healthy democracy demands transparency, and AB 322 moves California in the right direction.  I urge you to pass this important bill. Thank you.