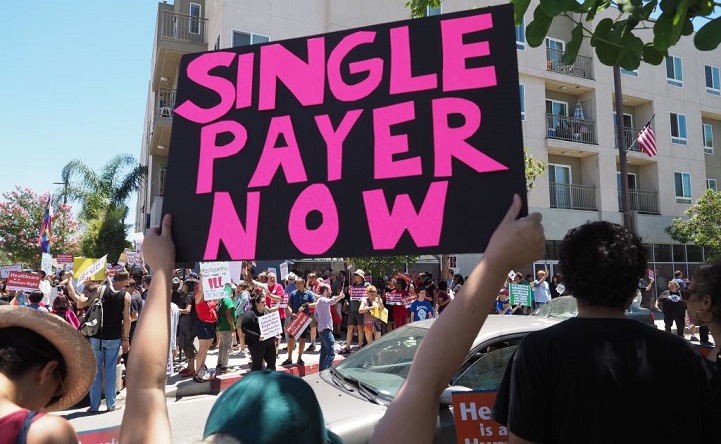 Senators who have refused to cosponsor bills that would reshape the nation’s ailing health care system have received an average of $14,000 to $24,000 more in campaign contributions from the nation’s biggest health-care companies than lawmakers who have signed on as sponsors of one of three major reform bills, according to a MapLight analysis.

A January Kaiser Family Foundation poll found almost 3 in 4 Americans think the government should do more to help people obtain health insurance. The typical American family pays annual premiums of $19,616 for health care -- almost one-third of the median U.S. household income. One in 4 Americans reported that they didn’t seek medical treatment because of potential costs, according to a 2017 Bankrate survey.

Yet the MapLight analysis highlights the political difficulty of reforming the health industry, which accounts for more than one-fifth of the nation’s $20 trillion economy. The 73 senators who have declined to cosponsor one of the three bills received a total of almost $4.3 million from the nation’s 10 largest healthcare companies between 2013 and 2018. During the same period, the 23 lawmakers who support a measure allowing Americans to buy health insurance through Medicaid reported contributions that totalled $765,000 from the health-care giants, which have market capitalizations that cumulatively approach $2 trillion.

“We have a structure that frankly works for most Americans,” Charles Kahn III, president of the Federation of American Hospitals, an investor-owned trade organization, told the New York Times. “Let’s make it work for all Americans. We reject the notion that we need to turn the whole apple cart over and start all over again.”

Medicare for All, Money for Few

The least-popular alternative in terms of cosponsors, a universal coverage plan that would essentially guarantee coverage to every American, is also one of the most-discussed potential reforms by 2020 candidates for the Democratic presidential nomination. Sen. Bernie Sanders, a Vermont independent who entered the race on Feb. 19, attracted 16 cosponsors with his 2017 “Medicare for All” bill. The co-sponsors received $678,297 during the six-year period.

Among Medicare for All cosponsors, Sen. Cory Booker, a New Jersey Democrat running for the 2020 nod, received more than $120,000 from the 10 largest health-care companies, including $45,450 from Merck & Co., which is based in Booker’s home state. Sen. Kirsten Gillibrand, a New York Democrat also running for president, reported almost $117,000 in donations from the companies. More than $97,000 of her total came from Pfizer Inc., which is based in New York City.

At the other end of the scale, Sen. Jeff Merkley, an Oregon Democrat, reported only $100 in total contributions from the health-care companies. Merkley received four $25 donations in 2017 from an Abbott Laboratories employee in his home state.

Among lawmakers who haven’t signed on to any of the reform bills, Sen. Rob Portman, an Ohio Republican, received $188,000 from the 10 largest health-care companies. Todd Young, R-Ind., reported getting $187,250, and Pat Casey, a Pennsylvania Republican, received more than $182,000.

Sanders has said he expects to sponsor another Medicare for All bill during the current session of Congress. A study by the Mercatus Center at George Mason University estimated that his measure would cost $32 trillion over a 10-year period; Sanders claimed that the study, which was funded by an organization that’s been supported by billionaire libertarian brothers Charles and David Koch, reflected potential savings of $2 trillion.

The Vermont independent reported $1,273 in contributions from the health-care companies and their employees for his Senate campaigns over the last six years.

Cosponsors of a measure introduced by Sen. Debbie Stabenow, a Michigan Democrat, received an average that was slightly greater than the cosponsors of the Medicare for All proposal. The Stabenow bill would allow people between the ages of 50 and 64 to buy into the $583 billion Medicare program. The Stabenow bill’s 21 cosponsors got more than $914,000 from the 10 largest health-care companies and their employees over the six-year period.

The largest donor among the big companies to all senators was Pfizer, which gave $214,825 to the Stabenow bill’s cosponsors. UnitedHealth Group, the Minnetonka, Minn.-based health insurer, gave more than $125,000 to cosponsors including Sen. Amy Klobuchar, a Minnesota Democrat who’s running for the 2020 Democratic nomination. Klobuchar received more than $27,000 from the insurance giant.

The Stabenow measure is similar to plans that were discussed during the 2009 debate over former President Barack Obama’s Affordable Care Act. Early drafts of the act would have allowed a “public option,” or a government health insurance plan. The public option, however, was rejected by former Sen. Joseph Lieberman, a Connecticut Democrat who currently works as a lobbyist for ZTE, a Chinese telecom conglomerate that’s been sanctioned by the U.S. government for violating sanctions against Iran and North Korea.

A more expansive proposal from Sen. Brian Schatz, a Hawaii Democrat, would allow all Americans to purchase health insurance through Medicaid, the $577 billion state-federal partnership providing health care for the poor and disabled.

Because states share the program costs with the federal government, Schatz’s proposal is the most popular of the three measures, garnering 22 cosponsors. Depending upon the generosity of legislators, Medicaid expenses make up between 13.9 percent of a state’s budget (Wyoming) and 38 percent (Missouri). Medicaid is also seen as a lower-cost alternative to Medicare; physicians receive roughly 72 percent of Medicare rates when they treat Medicaid patients, according to a 2017 Urban Institute study.

Only two senators are cosponsoring the Schatz bill and not the other two alternatives: Sens. Chris Murphy, a Connecticut Democrat, and Catherine Cortez Masto, a Nevada Democrat. Schatz, who introduced the bill on Feb. 14 after an unsuccessful attempt to pass the legislation in 2017, is also a cosponsor of Sanders’ Medicare for All proposal.