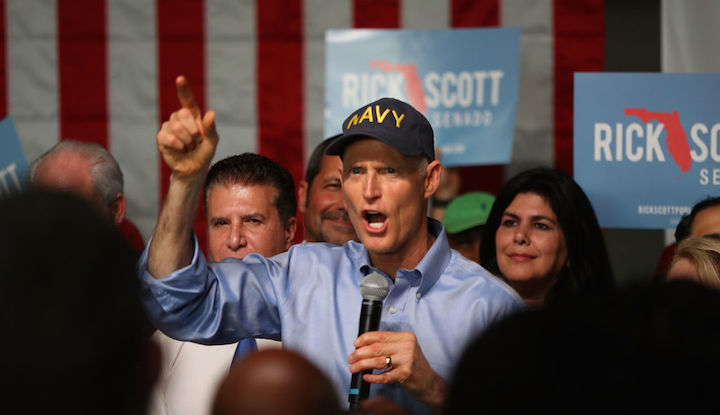 This story was produced by MapLight and published in partnership with the Florida Center for Investigative Reporting.

America’s largest private prison company may have made an illegal donation to a super PAC backing Florida Republican Gov. Rick Scott’s campaign for Senate, according to campaign finance experts.

The company, GEO Group, operates 141 prisons in the United States. It has $471 million worth of contracts with U.S. Immigration and Customs Enforcement (ICE) and is the controversial agency’s biggest contractor, according to an analysis by the investigative website Sludge. GEO has given more than $8.7 million to politicians during the last two decades, according to the National Institute on Money in Politics. The Boca Raton, Fla.-based company has spent another $8.4 million lobbying in Florida alone.

The questionable contribution occurred in April, when a GEO Group subsidiary donated $125,000 to New Republican PAC, a super PAC supporting Scott’s Senate bid. The contribution was made by GEO Acquisition II, Inc., a wholly owned subsidiary of GEO Group.

Brendan Fischer, a lawyer at the Campaign Legal Center, said the donation appears to violate the longstanding ban on political contributions by federal contractors. “A contractor can’t dodge the ban by making a contribution through a wholly owned subsidiary,” he said.

“In my book, this is a violation of the pay-to-play law,” said Craig Holman, an ethics advocate at Public Citizen. “You can't let subsidiaries get around what is illegal for the parent corporation to do. Otherwise you just essentially throw the law out.”

Spokespeople for GEO Group and New Republican PAC did not respond to questions from MapLight.

GEO Acquisition II, which was chartered in Delaware, lists its mailing address as the GEO Group’s headquarters in Florida. There are five directors listed in the subsidiary’s state corporation records; all five are listed as officers in records filed by its parent company.

A document filed with the Securities and Exchange Commission last year suggests that the subsidiary plays a role in the company’s federal contract work, as well. GEO Acquisition II is the general partner and full owner of CPT Operating Partnership, L.P., which owns the real estate at five GEO Group facilities that contract with federal agencies, according to the filing.

“The FEC has still failed to take action against GEO for its illegal contributions in the 2016 cycle -- and in the meantime, GEO continues to illegally pour money into federal elections,” Fischer said. “GEO may have calculated that the financial benefit from buying influence with politicians outweighs any penalties that the FEC might eventually impose.”

GEO Group has thrived under the Trump administration. Attorney General Jeff Sessions reversed the Obama Justice Department's plan to phase out the use of private prisons, and Trump’s immigration crackdown has kept business booming. The company’s latest annual report showed revenue has increased almost 50 percent since 2013.