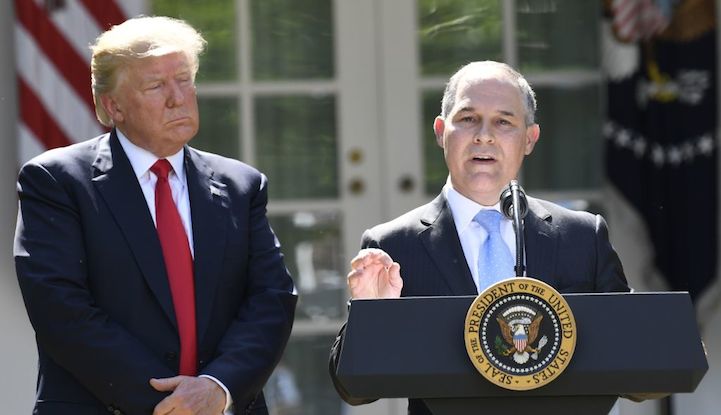 President Donald Trump and Environmental Protection Agency Administrator Scott Pruitt speak to the press after announcing the US will withdraw from the Paris climate accord at the White House in June of 2017.
Photo by SAUL LOEB/AFP/Getty Images.

This story was produced by MapLight and published in partnership with the International Business Times.

Top Republican donors have been pressing the Environmental Protection Agency to move its regional headquarters from San Francisco to Phoenix.

Although Friess told MapLight he was “was in and out in a number of meetings” that day, he said the meeting shown on Pruitt’s calendar involved a pitch to move the EPA’s regional headquarters from San Francisco to Phoenix. The office has more than 700 employees in California, Arizona, Nevada, and Hawaii. Friess said moving the office would save money for taxpayers, since commercial rents are significantly higher in San Francisco than Phoenix.

Pruitt’s calendar, published last week by the New York Times, highlights the influence wielded by top GOP donors in the still-young Trump administration. The agency records show Pruitt also met with an executive from an Israeli water company at the behest of GOP mega-donor Sheldon Adelson, and conferred with Marc Goldman, a Florida-based investor who sits with Adelson on the Republican Jewish Coalition's board of directors.

The EPA said it hasn’t set aside money in the budget year that began Oct. 1 to move the regional headquarters out of San Francisco. “Anyone that takes time to read President Trump’s budget will realize that no money is allocated to close down regional EPA offices,” said Jahan Wilcox, an agency spokesman.

Friess, who’s known for boosting Rick Santorum’s 2012 presidential campaign, donated $100,000 to Trump Victory in 2016 before describing him as the “less flawed” of the two major-party presidential candidates. Ingram chairs the real estate company El Dorado Holdings, one of Arizona’s largest private landowners. He is also a co-owner of the Arizona Diamondbacks baseball franchise and gave $10,000 to Trump Victory.

After the election, Ingram gave $15,500 to Trump’s Make America Great Again Committee, which raises money for Trump’s 2020 campaign and the RNC. In late December, he was listed as a co-chair in an event invitation from the Opening Day Foundation, a Texas-based nonprofit.

Trump’s adult sons, Eric and Donald, Jr., were named as honorary co-chairmen in the invitation, which presented donors an “opportunity to play a significant role as our family commemorates the inauguration of our father, friend and President Donald J. Trump.” The invitation said the Opening Day Foundation would donate all net proceeds from the event to conservation charities.

Although the foundation initially listed Trump’s sons as directors in its Texas corporate registration filing, a Trump spokesperson said that the event details had not been approved by the president’s family. The organization filed new paperwork two days later removing them from its board.

The EPA also is considering a plan to combine its Chicago office with the Kansas City regional headquarters. Officials said in April that no decision had been made. The Chicago office has come under fire for its handling of the Flint water crisis.