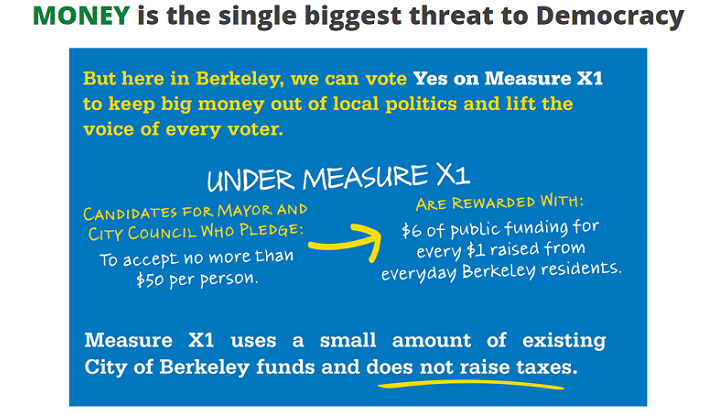 Poll after poll shows that Americans think that there’s too much money influencing politics and that our democracy is facing major hurdles. A report released today by MapLight tells the story of a successful 2016 campaign to reform local elections in Berkeley, California, showing how individuals can improve their government. With the 2018 elections on the horizon, the report provides tips for activists who want to improve democracy in their own communities by creating public financing programs for elections.

Bringing Fair Elections to Berkeley offers a case study of the campaign for the Berkeley Fair Elections Act. Passed as a ballot measure—Measure X1—by 65% of Berkeley voters in 2016, the Act established a program that rewards candidates for accepting only small contributions, amplifying the voice of small donors. The Act will be implemented for the first time in 2018. With this program, Berkeley joins the group of municipalities and states around the country that have committed to improving their elections by reducing special interest influence and promoting grassroots engagement.

This report was based on interviews with several people active in the Berkeley Fair Elections effort and is broken into five main sections, focusing on different aspects of the campaign. Sections include a history of attempts to pass public financing systems in Berkeley, how the Fair Elections policy was developed, how the campaign was structured, what strategies and tactics were used to reach voters, and a detailed look at fundraising and expenditures. Each section concludes with a list of key takeaways for activists seeking to pass similar reforms. The report also features appendices with sample materials from the campaign.

“This report demonstrates how a small group of dedicated activists with limited resources can effect meaningful change in the ways that local government works,” said Daniel Newman, President of MapLight and Co-Chair of the Berkeley campaign.

If you’re interested in learning more about how to bring public financing to your city, please contact us.