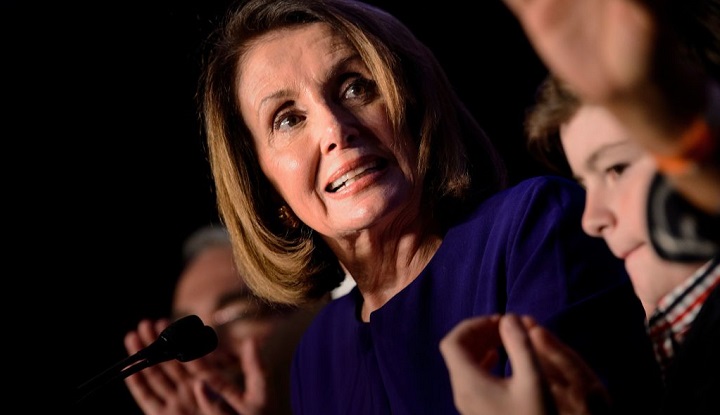 House Speaker Leader Nancy Pelosi celebrates a Democratic Party takeover of the House of Representatives at a party hosted by the Democratic Congressional Campaign Committee on November 6, 2018 in Washington, DC.
Photo by BRENDAN SMIALOWSKI/AFP/Getty Images.

This story is a collaboration between MapLight, a nonpartisan research organization that tracks money’s influence on politics, and Sludge, an investigative news website focused on money in politics.

Corporate lobbyists are raising an increasing amount of money for the Democratic Congressional Campaign Committee (DCCC) at a time when the House Democrats’ campaign arm is taking fire from the left for its effort to freeze out primary challengers.

Progressives have roundly criticized the DCCC for its plan to not conduct business with political vendors that work for candidates who plan to challenge incumbent Democrats. Rep. Ro Khanna, D-Calif., said the new policy could have prevented him from winning his congressional seat. Freshman Rep. Alexandria Ocasio-Cortez, D-N.Y., said the DCCC’s vendor policy would empower lobbyists because “voters will have one less avenue to pursue change.”

The DCCC raised nearly $19 million in the first two months of this year, more money than it had raised by this point last election cycle, and the committee is relying more heavily on corporate lobbyists to collect checks. Lobbyists whose clients include health care, oil, gas, and coal interests, raised almost $440,000 for the DCCC in January and February, Federal Election Commission records show. Many of their clients oppose progressive priorities like a “Medicare for All” health-care system or a Green New Deal to mitigate climate change.

“I do not take money from corporations, PACs, or lobbyists,” Khanna said in an email on Tuesday. “The DCCC should not, either.”

A DCCC spokesperson did not respond to questions from MapLight and Sludge, nor did any of the committee’s lobbyist bundlers.

In February 2016, the Democratic National Committee (DNC) quietly reversed an Obama-era ban on contributions from federal lobbyists and political action committees. Lobbyists raised roughly $100,000 for the DCCC in 2015-16, before raising close to $1.9 million for the committee during the 2018 election cycle. This year, led by centrist Democratic Rep. Cheri Bustos of Illinois, the DCCC has already received almost as much money via donations bundled by corporate lobbyists than in all of 2017.

While most of the Democratic presidential primary candidates support Medicare for All, and 108 House Democrats have signed on to single-payer legislation, the party’s congressional leaders have resisted calls for sweeping changes to the nation’s health-care system. They have instead pushed for improvements to the Affordable Care Act — the 2010 health-care law — and lower drug prices. In February, the Intercept reported that a top aide to House Speaker Nancy Pelosi, D-Calif., had detailed party leaders’ objections to Medicare for All in a meeting with health insurance executives.

The Partnership for America’s Health Care Future, a coalition of health-care companies and trade organizations opposed to Medicare for All, has sent frequent emails highlighting critical comments made by Pelosi and Bustos. On Monday, they distributed a memo noting that Bustos recently said the “price tag for Medicare for all is a little scary,” while Pelosi asked, “How’s it gonna be paid for?"

As Democratic House leaders undermine the left’s push for universal health care, lobbyists representing major health insurance and pharmaceutical companies have been flooding the DCCC with cash. All six corporate lobbyists who have bundled donations for the DCCC this year represent at least one health-care business or trade organization.

Vic Fazio, a former California Democratic congressman and senior advisor at Akin Gump, and John Michael Gonzalez of Peck Madigan Jones have lobbied for Pharmaceutical Research and Manufacturers of America (PhRMA), the nation’s largest pharmaceutical trade association. Fazio has also lobbied for Gilead Sciences, a company that has earned billions of dollars from sales of a drug based on government research to prevent HIV infection. Fazio has raised $73,500 for the DCCC this year; Gonzalez has bundled $30,500.

Steve Elmendorf, a founder and partner at Subject Matter, has collected $82,000 for the DCCC since the start of 2019. He has represented the Biotechnology Innovation Organization (BIO) and the Federation of American Hospitals. PhRMA, BIO, and the federation are members of the Partnership for America’s Health Care Future, the coalition working to defeat Medicare for All. Elmendorf has also lobbied for health insurer UnitedHealth Group.

Zach Pfister, policy director at Brownstein Hyatt Farber Schreck, has raised more than $180,000 for the DCCC so far this year. He has lobbied for AbbVie, one of the world’s largest pharmaceutical companies, on issues related to the government’s Medicare Part D prescription drug plan. His firm has also worked for Blue Cross Blue Shield. Invariant CEO Heather Podesta, who has raised $38,500 for the DCCC this year, has lobbied on Medicare Part D for British pharmaceutical manufacturer GlaxoSmithKline.

Democrats are also divided over the best approach to mitigate climate change. Although most progressives support Ocasio-Cortez’s Green New Deal plan, others favor less ambitious measures such as a carbon tax or carbon-capture technology.

The DCCC’s lobbyist bundlers represent major fossil fuel interests. Elmendorf, of Subject Matter, has lobbied for oil company BP America and General Electric, which operates an oil and gas division. Thomas, of Mehlman Castagnetti, has lobbied for the Edison Electric Institute, a trade organization for utility companies, as well as the oil company Chevron. Podesta has lobbied on natural gas pipelines for NextEra Energy, which is the second-largest American producer of electric power from natural gas and has billions of dollars invested in shale gas production and pipelines. Gonzalez recently lobbied Congress on behalf of Entergy, an electric utility that uses coal and natural gas to produce power.

While the DCCC is trying to keep its vendors from aiding primary challengers, there has been no such push to prevent its consultants from advising corporate clients, whose goals are often at odds with much of the Democratic Party. Global Strategy Group, which conducted polls for the DCCC last cycle, has worked with the health insurance lobby AHIP. The firm was also a consultant for the coalition that successfully defeated a single-payer ballot measure in Colorado in 2016.

SKDKnickerbocker, a media firm that’s worked for the DCCC, has provided public affairs support for controversial corporate mergers like the one between AT&T and Time Warner. Perkins Coie, a law firm that works with the DCCC and other major Democratic Party political groups, has counseled unnamed financial institutions.