Four Things to Know About the Next Supreme Court Fight 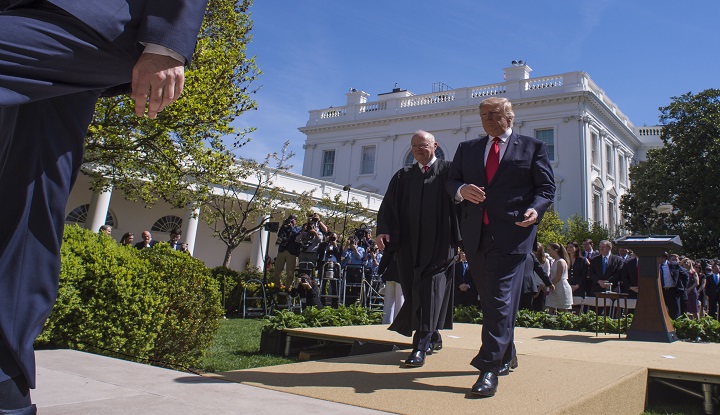 WASHINGTON, DC - APRIL 10: President Donald Trump and Associate Justice Anthony Kennedy make their way back to the Oval office after administering the oath of office to Justice Neil Gorsuch during a ceremony in the Rose Garden of the White House in Washington, DC.
Photo by Jabin Botsford/The Washington Post via Getty Images.

Because Kennedy was perceived as the high court’s only swing vote, particularly on issues of abortion and LGBT rights, Republicans see an opportunity to ensure a conservative majority on the court for decades.

Here are four things to know about the court fight:

We May Never Know Who Bankrolls the Confirmation

As MapLight reported last year, JCN received more than $23 million in 2016 from the Wellspring Committee. Wellspring, another dark money group, has been JCN’s primary funder for years. For years, Neil Corkery served as JCN’s president while his wife, Ann, led Wellspring.

Both JCN and Wellspring are tied to the Federalist Society, whose executive vice president, Leonard Leo, has served as a judicial adviser for Trump. Leo is directly involved in Wellspring's fundraising efforts, according to the Center for Responsive Politics. He was also linked to an anonymous limited liability company that donated $1 million to Trump’s inaugural committee.

While we know that a single $28.5 million donation made up nearly 90 percent of Wellspring’s revenue in 2016, no other organizations have reported giving to the group since 2011. The public may never know whose money helped secure Gorsuch’s confirmation -- or whose money will ensure a lifetime appointment to the next Trump nominee.

On the day Kennedy announced his resignation, JCN said it was launching a million-dollar advertising campaign to pressure moderate senators to support Trump’s to-be-named nominee.

JCN started running the ad on Facebook the day after Kennedy resigned. 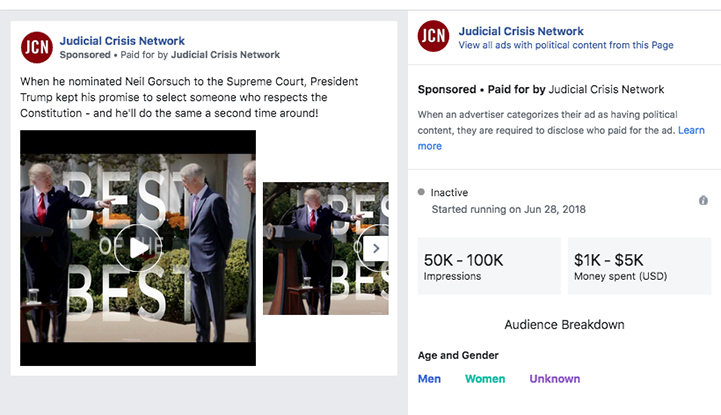 The Koch Network Plans To Spend, Too

Americans for Prosperity, the flagship political arm of billionaire libertarian brothers Charles and David Koch, has pledged to spend seven figures in support of Trump’s Supreme Court nominee. An official with the dark money organization told HuffPost that they’re “impressed with the whole list” of judges Trump is considering for the spot.

According to CNBC, White House officials directly asked Americans for Prosperity to be part of the coalition of advocacy groups that are planning to promote Trump's court pick. The organization has started running online ads telling the Senate to “confirm a Supreme Court justice who will defend the Constitution.” 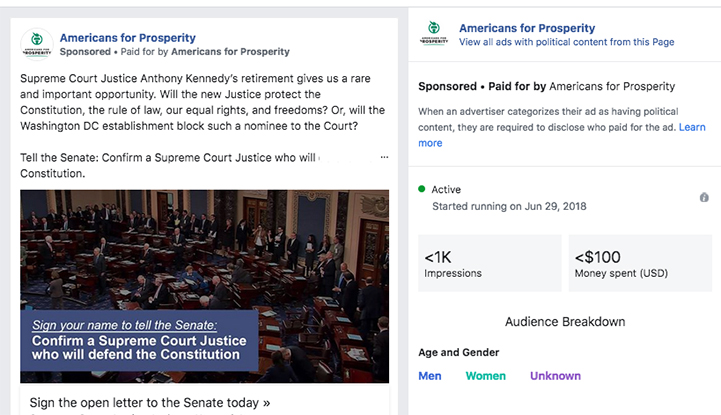 Although Americans for Prosperity doesn’t disclose its donors, tax records show it received a $48.7 million donation in 2016 from Freedom Partners Chamber of Commerce, a dark money organization that has been described as the Koch Brothers’ “secret bank.”

Demand Justice was created this spring as a liberal counterweight to JCN. It’s also a dark money organization, and its finances could be even murkier than its competition on the right.

Demand Justice recently started a petition calling on Sen. Susan Collins, R-Maine, to oppose all of the names on Trump’s list because he has said in the past that he’ll only appoint justices who want to overturn the court’s 1973 Roe v. Wade decision and limit abortion rights.