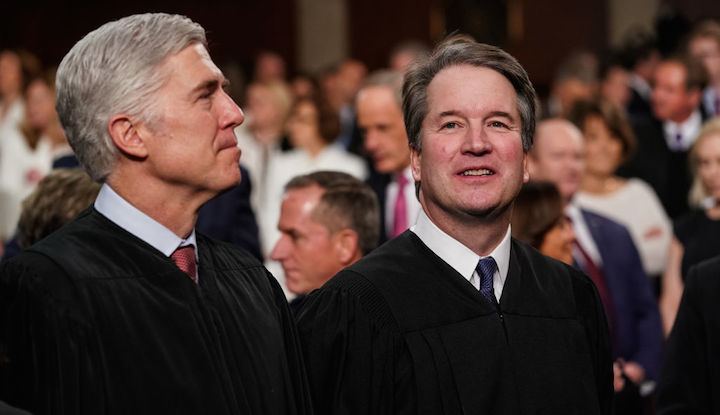 The Judicial Crisis Network (JCN), a Washington, D.C.-based nonprofit, pledged to spend as much as $10 million to ensure Kavanaugh’s confirmation -- the same amount that it spent to help confirm Justice Neil Gorsuch in 2017. JCN has close ties to Trump’s judicial adviser Leonard Leo, a longtime executive at the Federalist Society, the influential conservative and libertarian lawyers network based in Washington, D.C.

More than three-quarters of the funds JCN raised between July 2017 and June 2018 came in the form of a $17 million contribution from a single anonymous donor, according to its latest tax return, which was obtained by MapLight and OpenSecrets. Former Supreme Court Justice Anthony Kennedy announced his retirement in June 2018, paving the way for Kavanaugh’s nomination. 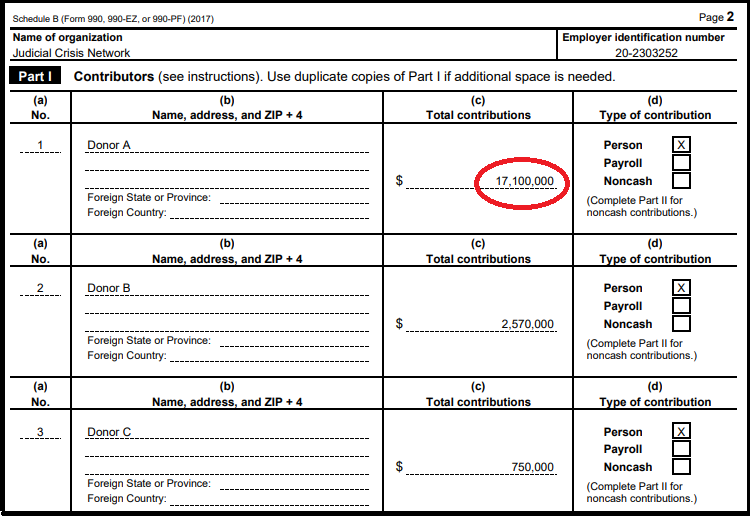 A tax record from the Judicial Crisis Network shows an anonymous contribution for more than $17 million.

The bulk of JCN’s funding has typically come from the Wellspring Committee, another secretive nonprofit run by operatives who wear multiple hats in a larger network of opaque groups. Neil Corkery, Wellspring’s current president, previously served as JCN’s treasurer; his wife, Ann, was leading Wellspring at the time.

Wellspring has continued to send massive annual endowments to JCN since the group launched in 2005. JCN, in turn, has continued to pour tens of millions of dollars into every subsequent Supreme Court nomination fight and working to reshape the judiciary. Wellspring reported donating almost $15 million to JCN in 2017, on top of $23.5 million in 2016. Neither organization discloses the sources of its funds.

The 2017-18 tax return also reveals JCN paid $241,000 to BH Group -- a Virginia limited-liability company tied to Leo, the Trump judicial adviser -- after paying the company $947,000 the previous year. BH Group was responsible for a mysterious $1 million donation to Trump’s inaugural committee in 2017. BH Group received at least $919,000 from Wellspring and $1.4 million from the Judicial Education Project, a nonprofit affiliated with JCN, through the end of 2017.

JCN contributed $250,000 to the National Rifle Association (NRA), after giving the gun rights group $1 million from 2016-17. America Engaged, another nonprofit tied to Leo, also gave $950,000 to the NRA in 2017. The NRA ran ads boosting both Gorsuch and Kavanaugh.

JCN gave almost $3.6 million to the Republican Attorneys General Association (RAGA) and $450,000 to the Rule of Law Defense Fund. RAGA launched the dark money policy fund while then-Oklahoma Attorney General Scott Pruitt was on the association’s board of directors. Pruitt later chaired the fund before Trump hired him to lead the Environmental Protection Agency.

One of the many controversies Pruitt dealt with during his 17-month EPA tenure involved the revelation his wife had secured a position with JCN as a temporary contractor. JCN reportedly received her resume from Leo, who has helped raise much of the Wellspring Committee’s cash, according to McClatchy.

From 2017-18, JCN continued quietly bankrolling a small but expanding circle of conservative groups aimed at attracting women, with $75,000 to the Susan B. Anthony List; $35,000 to the American Women's Alliance; and $250,000 to Winning for Women, which was launched in 2017 as a conservative counterweight to EMILY’s List.

The Susan B. Anthony List boosted Kavanaugh’s nomination and continued to support him after he was accused of sexual assault by Christine Blasey Ford, a Stanford University professor who knew the justice when he was in prep school. Winning for Women also threw their support behind Kavanaugh, spending on hundreds of videos and Facebook ad buys targeting women.

JCN also donated $500,000 to A New Missouri, a dark money organization established to support the state’s former Republican governor, Eric Greitens. He resigned last year amid an investigation into the organization.

This story was produced in partnership between the Center for Responsive Politics and MapLight.